Like everywhere else, the times have certainly been a little strange since my last posting on March 11. The next day, our Audubon Thursday Birders did their usual thing heading down to a new location, San Lorenzo Canyon, but already folks were starting to think about the oncoming pandemic. By the next day, we’d already decided to discourage carpooling for future trips and planned to start keeping that “social distance” apart from each other. By the end of the weekend, we had cancelled all trips, meetings, and events through at least the end of May. Since then, things have gotten even more isolating as a lot of us older folks are doing our best to minimize personal contacts and our state and local governments are actively addressing the threat by closing stores, malls, movie theaters, bars, restaurants, playgrounds and more. Most recent was a State Public Health Order on March 23 that is basically an order to stay at home except for essential activities that sounds a lot like what’s been going on in England and other places lately. It still seems acceptable to go outside for “essential exercise”, although some are interpreting that in a more limited sense such as not driving to a park or only allowed if you’re actively walking your dog or fitness walking. Having gotten quite well practiced at retirement in recent years, other than the lack of direct social interaction and learning how to buy food to last a week, so far I haven’t had to modify my behavior significantly and certainly haven’t suffered the economic impact on all those employed in those businesses that have been forced to close. Getting outdoors to look for birds, butterflies, and whatever else is going on seems to be my main thing and for the most part hasn’t been significantly affected.

Social distancing has surely become a key concept bandied about in all this, which I acknowledged by posting in my Facebook caption of this photo, “Social distancing…Corrales NM today”. 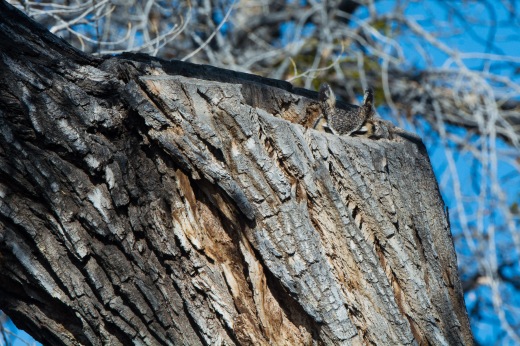 The fact that we’ve been seeing her head peeking out since at least March 9 almost certainly means she’s hatched a few owlets that we should be seeing soon. A few days later, I noticed the male parked in his usual spot, but looking away from the nest and the trail I usually photograph him. Walking around to the other side of the eastern ditch, he was fairly easy to spot, but still did his best to camouflage himself with branches breaking up his profile.

Two of the nests I’ve been following this year are now off-limits with the closing of the State Park and a school, but it was fun getting to locate a new nest near Tingley Ponds that a friend told me about but swore me not to reveal its location. I probably won’t visit it again until the little ones start appearing.

That same day, Rebecca and I, strictly maintaining our social distance but at least getting a chance to talk to each other for the first time in a week, found a porcupine snoozing at eye level in the bushes near the trail. What I like about this shot is that it really shows off those defensive quills usually hidden by its fur.

Another pandemic-related sighting yesterday was of this nesting Curve-billed Thrasher, who seems to have cornered the market in toilet paper which has vanished from all my local stores recently.

That was going on in Embudito Canyon, close to where she’d nested in 2017 in a nest very close to the main trail and that eventually failed for unknown reasons. Embudito’s been my go-to place the last couple of weeks since it’s easy to get to and hasn’t been too crowded except on weekends. Yesterday, I noticed that everybody was following the new guidance of keeping group size to no more than 5 people, but nobody seemed particularly worried about keeping six feet apart. Ever since that social distance rule came out, I’ve gone out of my way (literally) to keep a good distance from others; just wish everyone else was paying as much attention. Interestingly, on most visits there since the beginning of March, good numbers of Sandia Hairstreaks have been flying about, often to the exclusion of any other butterfly species.

This is a special butterfly that was first discovered in the Sandias (in La Cueva Canyon just north of Embudito) in 1958 and was named the state butterfly of New Mexico in 2004. Although it is now known to range from southeast Colorado down to northern Mexico, I typically get a few requests every year from folks about where and when to find them and enjoy getting to track one down with those who come to visit. It’s always fun to point one out to others out for a walk in Embudito, which I’ve done this year for anybody who asks or looks as if they might be interested. New this year is my asking them to keep their six foot distance, but almost every time people get so interested in seeing these tiny guys they end up standing quite close. So for the rest of this year’s season, either I won’t mention them at all or will try to point them out with a laser.

On several visits over the last two weeks, everything seems to have come together butterfly-wise that for the first time this year I’m seeing a few more species flying, most of which I’ve managed to photograph. First up is a much better shot of the Southwestern Orangetip that I’d first seen on March 11, this one from March 16. 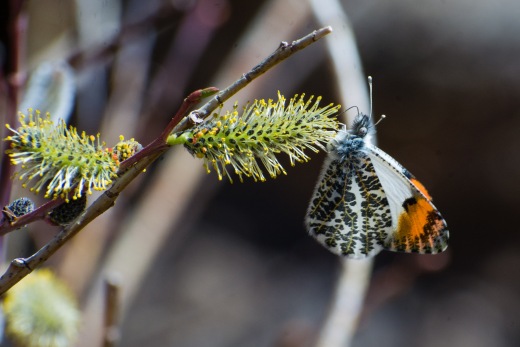 That day was also good for a Spring White

and a Hoary Comma. 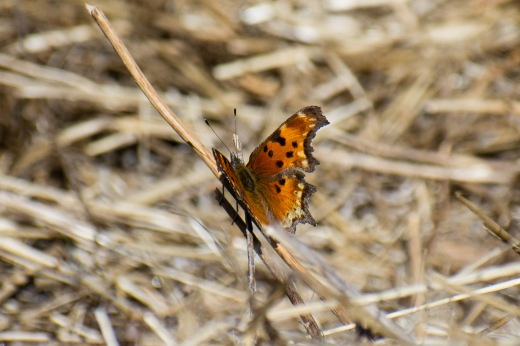 People had been telling me about the Mourning Cloaks they’d been seeing recently, which like the Hoary Comma, is a butterfly that overwinters as an adult in leaf litter and can be seen early in the year on the occasional warm, sunny day. Before I got this picture of the Hoary Comma perched on that stick, I’d seen it and a Mourning Cloak chasing a Two-tailed Swallowtail, the latter a little earlier in the season than I’ve seen in the past.

You’ll notice that Southwestern Orangetip above nectaring on catkins of our local willow. There is a small stand of those willows just above the spring in Embudito that seems to attract a good variety of butterflies at this time of year. In addition to the orangetip, yesterday I had one of those Sandia Hairstreaks on it, my first Gray Hairstreak of the year,

and the first of what some years is the ubiquitous Painted Lady. 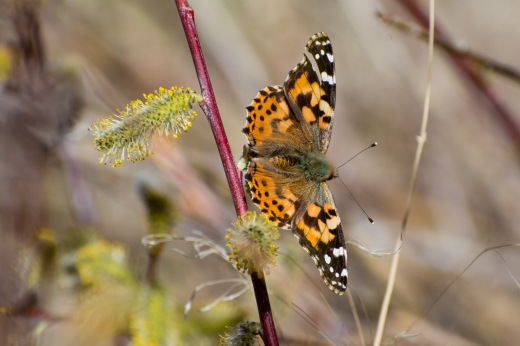 Highlight of the day (and of the year so far) was spotting a California Tortoiseshell close to the spring area. From a distance I somehow realized that it wasn’t just another of those more common Hoary Commas but had to try to get closer for a picture without running it off, a situation complicated by the arrival of a person walking their dog and wanting to keep them a social distance away. They of course kept coming and decided this would be a good place to stop and give the dog a drink. All turned out well in the end, however, with the butterfly coming much closer and posing for a few seconds while the lady and her dog stayed far enough away.

Looks like it’s going to be a good Spring, especially once we “flatten that curve” and this virus becomes history.