Despite all this social distancing, home lockdowns, travel restrictions and closing of all non-essential businesses, the Spring season seems to have declared itself an essential activity and is fully operational. Trees are bursting out with their new blooms, wildflowers are popping up, birds are returning, and more and more species of butterflies have been appearing. Weather’s getting warmer without the spring winds kicking up too often. I’m still getting out fairly regularly but making a significant effort to keep my distance from others, avoiding peak times and overly-crowded parking areas, and minimizing trip distances.

Among those butterflies seen the last two weeks was this Great Purple Hairstreak. It’s one of those that are usually only seen a few times every year and usually in unexpected locations. It’s also the butterfly that first got me into this butterflying thing – amazed that something so spectacular was around, but that you’d never notice it unless you were looking. 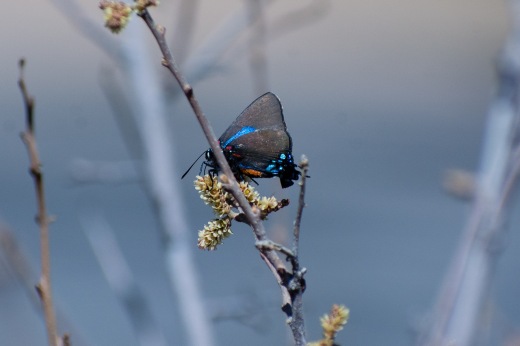 Of the very few butterflies we’d see that day, there was also a Mourning Cloak, a species that several friends had mentioned recently. Mourning Cloaks over-winter as adults in leaf litter and start flying whenever the weather warms up sufficiently. Usually seen flying by or on the ground with wings spread to soak up the sun, this one gave me a good look at the underside of those wings. 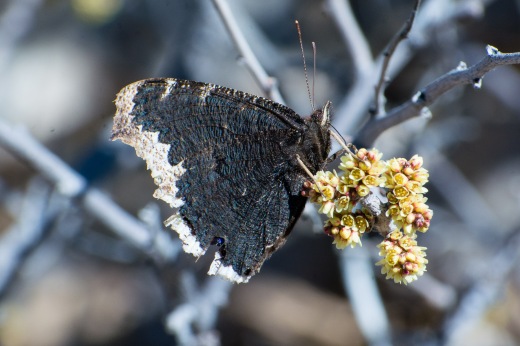 It’s been a little unusual this year seeing so many of our Sandia Hairstreaks around all their usual locations. Usually lucky to spot one or two and to hopefully have them perch long enough to photograph, this year there seem to be several on just about every stand of beargrass as well as by damp areas and other nectar sources. A bit variable in their coloring, now and then a fresh one really catches my eye with that brilliant emerald green. 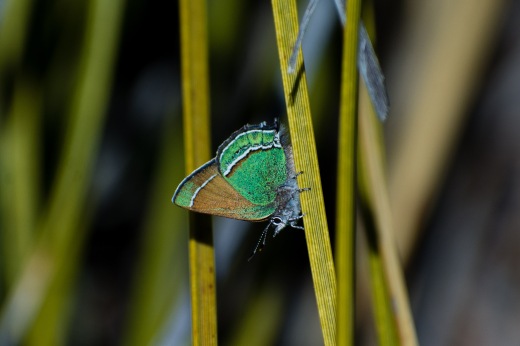 The Southwestern Orangetips have also been flying for the last few weeks, but are still pretty tricky to find perched anywhere long enough to photograph. 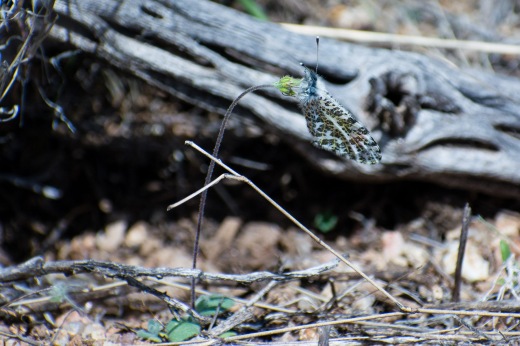 Rebecca’s recently turned me on to Three Gun Spring as a new spot for both butterflies and birds. I’d been there a few times in the past without finding it all that productive, but it’s going to be on my list of places requiring regular visits. Parking can get a bit crowded (at least these days), but we saw very few people there once we started up a side trail. It had plenty of those Sandia Hairstreaks, Southwestern Orangetips, the ubiquitous Painted Ladies that are showing up everywhere again, but what really got our attention was the Yucca Giant-Skipper. We’ve only seen this species in a few locations and were thrilled to see at least three individuals on a recent visit. 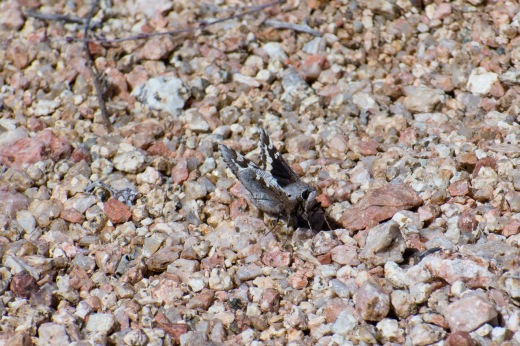 A few other more common species were also seen there most for the first time this season, including a Variegated Fritillary, Spring White and Checkered White, Common Checkered-Skipper, and the tiny Dainty Sulphur. 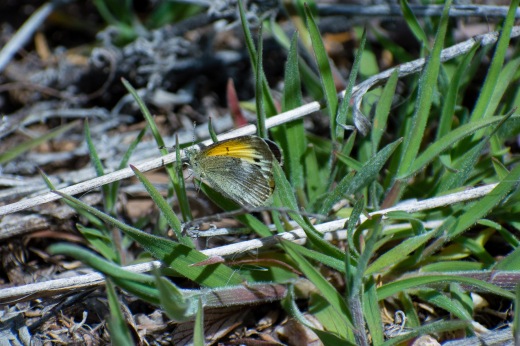 Most of my outings lately have been to my ‘local patch’, Embudito Canyon, which is quite close to my house and usually not too crowded. Butterflies have been pretty good there recently, but it was fun seeing a few new birds showing up again, including Black-throated Sparrow, 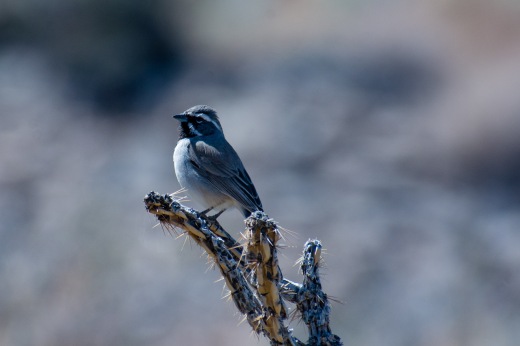 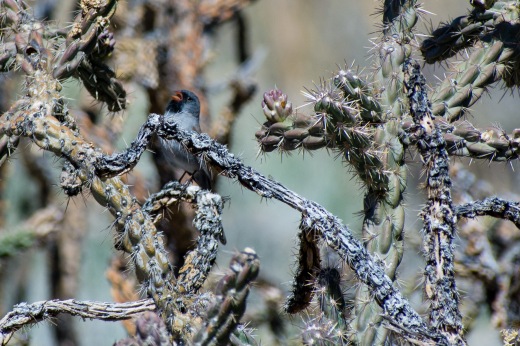 and a Ladder-backed Woodpecker that popped up right next to the trail. 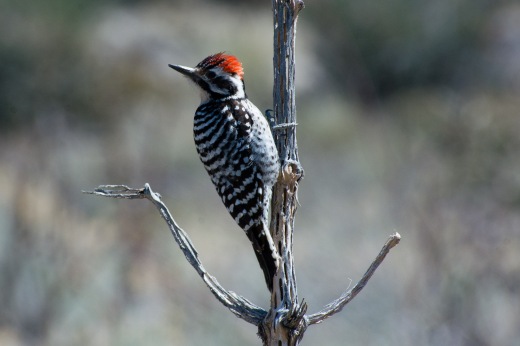 The other interesting sighting in Embudito last week was what struck me in these unusual times as a unicorn. 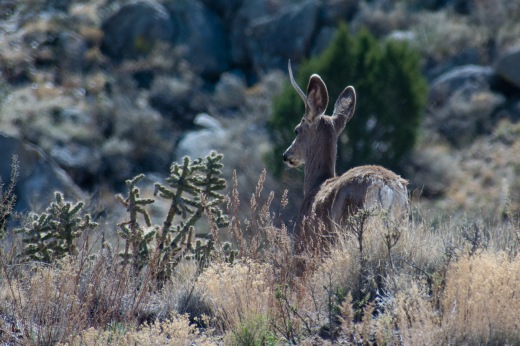 Turns out it’s (obviously) a young Mule Deer that’s shed one of its antlers. Still, tho, it’s the only unicorn I’ve ever seen out there.

On the way to Embudito, I’ve also noticed a Cooper’s Hawk has taken up residence that I’ll be keeping an eye on in the coming weeks. 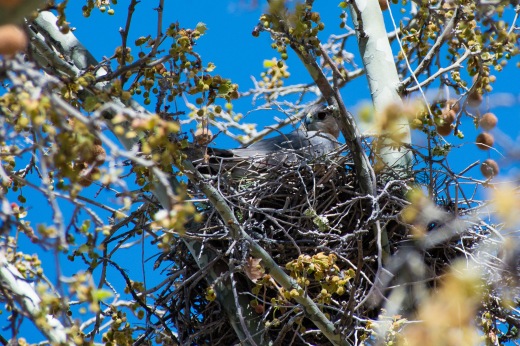 Made the rounds of most of my owl nests this past Sunday since it had been a few weeks and those little ones should start appearing any day now. A month since my last visit, things seemed about the same at Pueblo Montano although she might be sitting up a little higher. 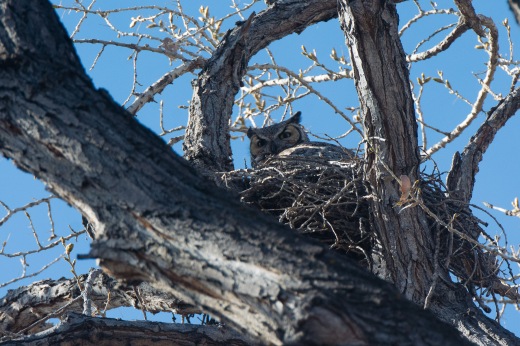 Also seen at Pueblo Montano was my first Snowy Egret for the year, hanging out at the pond at Bosque School. 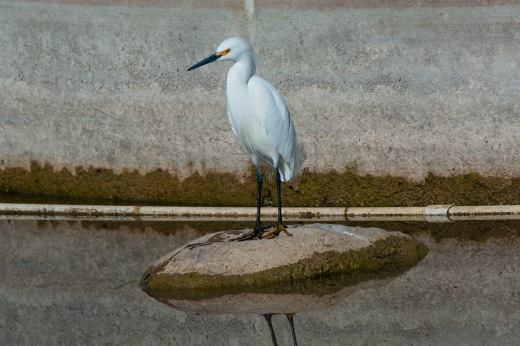 Also a month since my last visit, Willow Creek was pretty much unchanged (which was also the case for the Dixon Road nest). 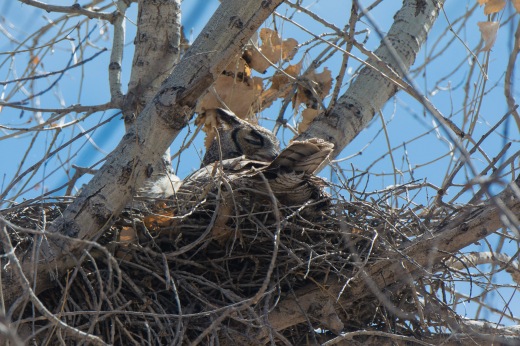 Since I was in the neighborhood, I also thought to take a look at Calabacillas Arroyo. It had been a month since I’d seen any of those owls who had so surprisingly finished nesting way earlier than I’ve ever seen. I had been back a couple of times after the day they all disappeared and had pretty much given up seeing them until next year. Having read somewhere that owls tend to stay in the same area all year, however, it seemed worth another look. And, yep, this time it was fairly easy to spot one adult and one of the little ones not far from the nest cavity. It wasn’t until I got home to look at the pictures that I saw a third owl…the two adults on either side of that squawking youngster. Bet the other little one is somewhere nearby, and I’ll be taking another look soon.

Heading home finally gave me a look at the two Osprey nesting at the North Diversion Channel. I hadn’t seen anybody or maybe one adult there in recent visits, but this time had the male fly in with a rather large fish while I was focused on the female looking off in the direction from which he was approaching. 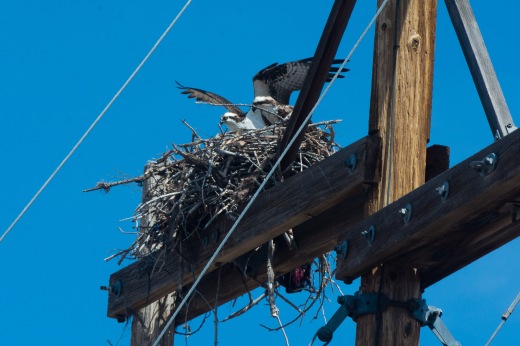