More than 3 weeks have now passed since my last posting; following are a few of the better pictures I’ve gotten since then. Weather hasn’t cooperated very often lately, I’ve gotten busy with taxes and other menial tasks, and I haven’t been getting many good photo opportunities. There have been lots of porcupines about lately, which are always fun to spot. 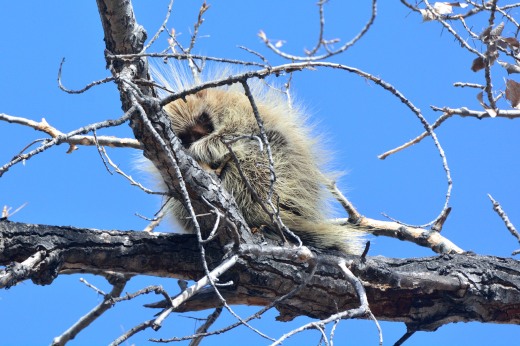 I’ve been focused the last few weeks on finding more nesting Great Horned Owls after spotting my first one for the year at Albuquerque Academy on February 17 (photo shown on my last blog update). Since then, I’ve found three more. The first one, during our Audubon Thursday Birder trip to Durand Open Space on February 28 was a total surprise we just happened to notice. 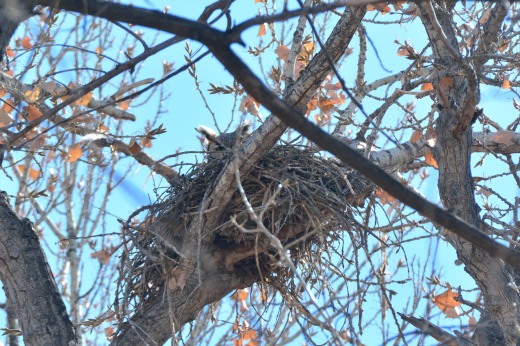 (I’d actually checked eBird that morning but none had ever been reported there, and our trip leader had just mentioned looking for them unsuccessfully during her scouting trip the day before.) Another highlight that morning was a young Bald Eagle that entertained us by flying fairly low right above us.

Next up was the one at Pueblo Montano Open Space I found on March 1 after looking around where some recent eBird reports suggested they were.

Checking back a week later, we spotted the male hiding out fairly close to that nest.

I’d imagine this is the pair that I’d seen sitting on the same branch of a tree much further south for about a month (and got to show the Thursday Birders on the February 7 trip).

Just today, I got to see my fourth nest so far for the year, interestingly nesting on the basalt cliffs of the Petroglyph National Monument. 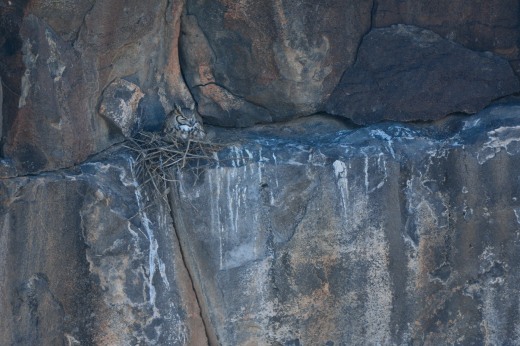 There’s a couple of other individual owls I keep seeing in the same spot on every visit, but have so far been unable to locate a nest that almost has to be nearby. I’ve been seeing one near the Rio Grande Nature Center since early February, and most recently think that one has taken up a spot just in front of the entrance to the Visitor Center. 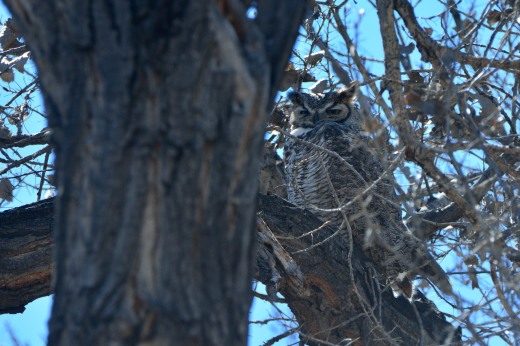 Keep expecting to find one of the old Cooper’s Hawk nests there occupied with a female, but haven’t been able to see any evidence of one yet. And then, of course, there’s the ones I’ve been seeing in Corrales for quite some time now (including yesterday’s Thursday Birders), but try as I might still can’t find a nest.

There’s also a quite obvious one in a tree by the City Place office building, a quite urban setting, but any nest just isn’t very easy to see buried in that tall ponderosa pine.

Something I’d been looking for regularly over the last few weeks, knowing they should be flying any day if the temperature just got high enough and the sun was shining, was the Sandia Hairstreak. A specialty of our area that was first seen in 1958 or 1959 by Noel McFarland in the Sandia foothills, scientifically named by Paul Ehrlich and H. K. Clench in 1960, and the New Mexico State Butterfly since 2004, I regularly have visitors from all over the country hoping to see one. They do fly from here down to Texas and into Mexico, but Albuquerque is where they were first recognized as a unique species and are not that hard to find during their seasonal flight. A treat nonetheless to see one right on schedule on March 6 in Embudito Canyon.

Also had a nice visit with a Cactus Wren that morning, a bird that’s only been seen here (nesting no less!) the last several years. 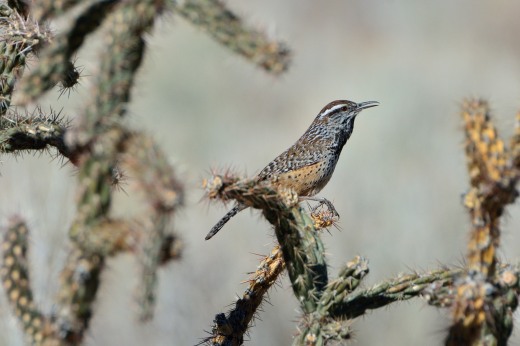 Looking forward to seeing some baby owls soon and lots more butterflies that ought to pop out as soon as the weather warms up a bit.