A Bit of Spring

The first day of spring arrived last Wednesday, and we’re finally getting a few calm, sunny days with fruit trees in bloom all over town, warmer days prompting a few spring wildflowers and a few more butterflies. We’re still waiting on most of the nesting Great Horned Owls to show their little ones, while there are at least two nests in town (one of which I’ve found) where the young ones are much further along and just about to disappear. Seeing a few other new birds for the year, too, as we anticipate the upcoming migration season.

For butterflies, I’ve mostly just gone on a couple of quick trips to check on what’s flying in my ‘local patch’ Embudito. There’s been a Sandia Hairstreak on my three trips in March, but it wasn’t until a visit last Monday that I’d pick up a few more species including the Southwestern Orangetip, Mylitta Crescent, Mourning Cloak, several Painted Lady, and a Common Checkered-Skipper among others. The Common Checkered-Skipper is usually quite common there most of the season, but usually lands on the sand with wings spread open, so it was a treat to get that ventral view while this one nectared on an early spring wildflower.

A bit of a surprise to me this early in the year was seeing two pair of Burrowing Owls last Saturday in the area known as “Owlville” down in Los Lunas.

And then the next day finding the one reported recently in Rio Rancho, where I’d heard they’d been seen last year as well. 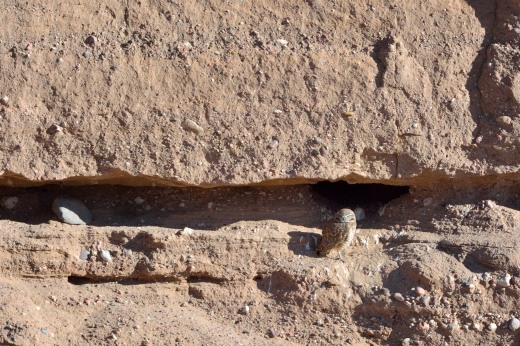 Looking around the bosque in the area of Tingley Ponds for nesting owls (unsuccessfully), I did get a nice shot of a Greater Roadrunner,

and later, a Hermit Thrush sitting out in the open. 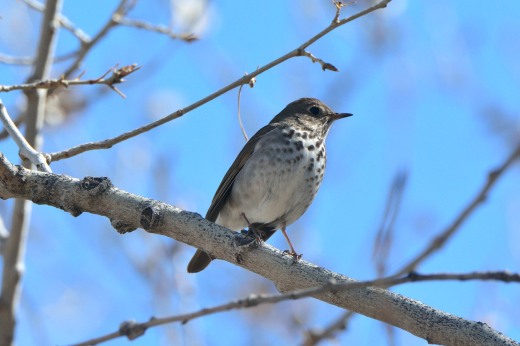 One day last week, Rebecca and I drove around the eastern plains of Torrance County on a rather slow birding day but did get nice looks at a Loggerhead Shrike.

Surprised to see a picture in the Albuquerque Journal one morning of a couple of young Great Horned Owls nesting on the newspaper’s property, I headed down the next morning wondering if I’d be able to find that nest. One had been reported there for the Albuquerque Christmas Bird Count last December, but I hadn’t heard anything about a nest there. Turns out the nest was quite easy to spot since it was in an open sycamore tree and the three little ones were spread out on the branches.

These guys are way further along than any of the other nests I’ve been watching, none of which have yet hatched their young ones. (I did, however, see a Facebook posting around the same date of another nest somewhere near UNM that also got started way early this year.) Returning about a week later, I’d see both adults;  Mom (look at her claws!) on a branch near the nest,

and Pop sitting in a nearby ponderosa pine, but only one little one sitting in the nest.

Later reports from a friend noted seeing one of the other little ones also in a ponderosa, so they will likely all just vanish one day soon. A little later that day, I stopped by to check on the nest at Albuquerque Academy where I’d first seen the female nesting way back on February 17 and would expect her little ones to appear any day now. But she was still tucked in pretty well waiting for those eggs to hatch with her mate perched a little higher in the nest tree. 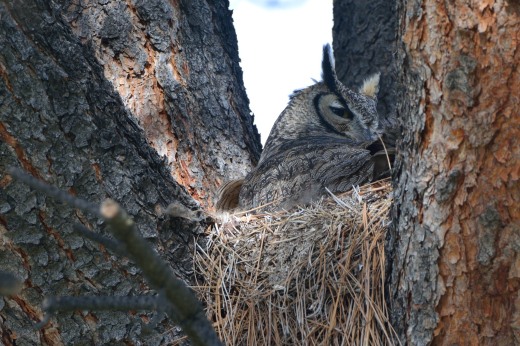 The next day after birding around Corrales for awhile, I thought since it wasn’t far I’d go look around Willow Creek Open Space one more time. Owls have nested there regularly in the past, but none had been reported this year and on my earlier visits I hadn’t seen any in their usual spots. With rather low expectations, it was quite exciting to spot an owl sitting up in a nest just off the parking area.

Last Saturday, Rebecca and I drove down to Bosque del Apache NWR to scout out her Audubon Thursday Birder trip there this week. Before getting to the refuge, we stopped by a house in the town of San Antonio to look for the Inca Doves she’d spotted there during the Christmas Bird Count last December. No doves that day, but it was quite unusual to note a rather large bird sitting in a tree in that yard as we pulled up – yup, turned out to be a Great Horned Owl; first I’d ever seen down there.

Although it seems the Sandhill Cranes and Bald Eagles have all moved on after wintering there, we had a good variety of birds as we worked our way around the refuge. First up, the White-throated Sparrow and the immature Harris’s Sparrow near the Visitor Center where we’d seen them on an earlier visit.

Three Great Egrets greeted us as we entered the refuge, a bird we don’t see very often here,

and we managed to spot both the Lucy’s Warbler and (lifer for me!) Long-tailed Duck an acquaintance working at the Visitor Center told us about. 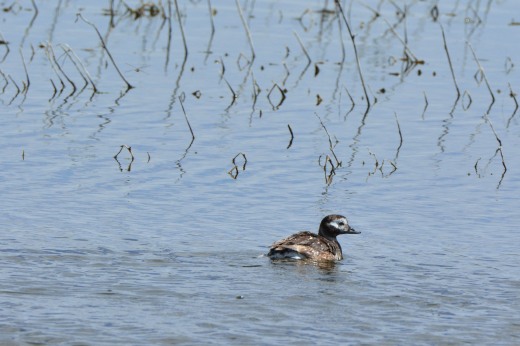 I also got a nice shot of a Bewick’s Wren that popped up as we were scanning for the Lucy’s. 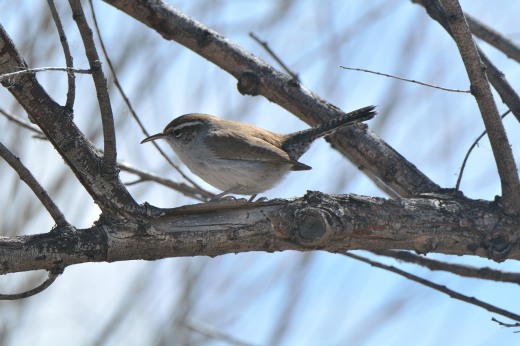 Yesterday, I went in search of a Great Horned Owl nest a friend had told me about at Valle de Oro NWR. Took me quite a bit of looking at the obvious nest from several different angles before I got a peek at the female brooding her eggs.

Interestingly enough, this nest is quite close to where the Common Black-Hawk nested last year and they were also back in town calling back and forth but not quite nesting yet.

Walking along the irrigation ditch toward that area, I’d also get nice looks at my first Osprey for the year.

And then today, I get a text that our breeding pair are back at their old nest getting ready for this year’s attempt. Last year, I think, was the first year that they’d ever successfully nested in the county so it should be fun to follow developments over the next few months.

4 Responses to A Bit of Spring