Most of the pictures for this posting were taken during last week’s Birdathon, with the rest from other outings from a week earlier. On April 24, a visit to Embudito turned up a Canyon Wren singing its heart out deep in the canyon,

accompanied by the non-stop vocalization of a Curve-billed Thrasher down in the cholla. While I’ve certainly got more than enough pictures of these guys, it’s hard to walk by without snapping another.

The next day was the Audubon Thursday Birder trip to Manzano Pond and Quarai, the latter a unit of Salinas Pueblo Missions NWR. We’d end up with a pretty good bird list for the day despite birding being a little slow most of the time; no doubt numbers will pick up once spring migration is in full swing. One of the highlights at the pond was this spectacular male Mountain Bluebird blending into that New Mexico blue sky.

And for me (of course) the highlight at Quarai was seeing that the Great Horned Owls had returned to their nesting spot in the niches of the old Spanish Mission ruins. Everyone easily got to see the male  in an open niche and the female in another…the little ones were still a little shy and I was one of the few that got to see both of them later in the morning.

The next day, I checked in on a few of my other nesting owls around town and stopped by the Northern Diversion Channel (I prefer to call it Tramway Wetlands) to see that the Osprey nest is still a work in progress, and to sneak up on a few American Avocet that I don’t recall ever seeing at that location before. 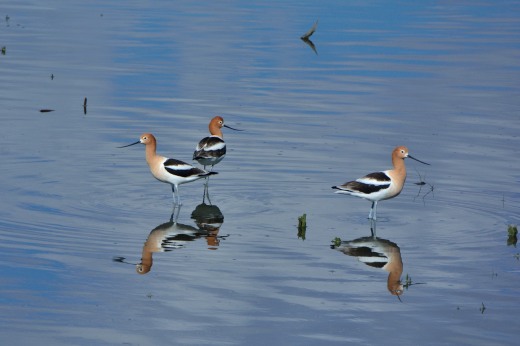 Later that day the sunny, calm, and warm weather had me checking on the butterflies in my “local patch” Embudito, and it was fun to spot a few good species, including my first Great Purple Hairstreak there in two years, continuing Sandia Hairstreaks, and others. Close to where the stream starts its run down the canyon I had three Two-tailed Swallowtails dropping down to the damp areas, one of which might have been about finished since it didn’t fly off as I approached and at one point allowed a Dainty Sulphur to perch on its wing. (Later, a young boy walked right up to it and got to pet the butterfly!) 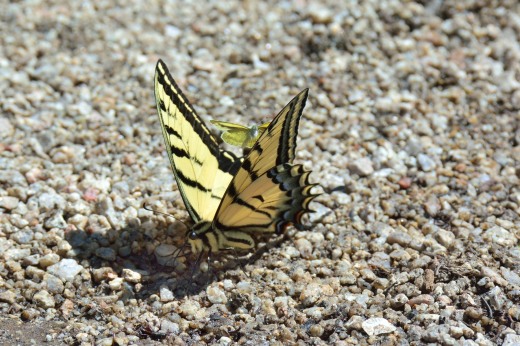 On Saturday, Rebecca and I returned to look around to find a few more species including a Short-tailed Skipper and our first Spring Azure for the year, and to get a nice shot of a Southwestern Orangetip that had finally landed – one of the few butterflies I’ve ever seen on a dandelion.

A few days later, a Scaled Quail posed nicely for me on a fence post close to the parking lot. Years ago, this was the most common quail species in this area of town (and my yard) and only rarely would we see Gambel’s Quail, a situation that has completely reversed itself over time.

About those owls, highlights that week included a visit to the nest at Albuquerque Academy, where the one little one was out in the branches of the nest tree but not quite ready to fly yet. It had already started learning how to hide good, and this was the best picture I was able to get while I was there.

It was a bit surprising exactly a week later to find no evidence of the little one or the female anywhere near the nest, although the male was still around in a nearby tree. Not sure what was up with that since I would have expected the young one to have a few more weeks close to the nest. At the nest in Corrales where I’d also seen a little one about a week earlier, this time I got a short look at two of them (Rumor has it there could be 3 in there, so I’ll be back soon.)

That one was also a little unusual, because while I spotted the male in his usual spot across the ditch from the nest the female was nowhere to be found. Usually it seems she’ll leave the nest to give the young ones more room, but will be standing close by.

So that brings me to our May 1-3 trip down to Washington Ranch south of Carlsbad, NM for the Thursday Birder Birdathon. Since Rebecca had volunteered to organize and lead the event, we got an early start to do some scouting for water birds at three locations near Carlsbad. While it was easy enough to get to our first spot, Cheapskate Point on Brantley Lake, driving a bit further north around a cove would have been a little tricky for some of the group and with the breezy conditions that day we saw very few birds. One that popped up right next to the car, though, was a cute Snowy Plover.

We also checked out an area around Avalon Lake and then Six-Mile Dam, but again didn’t see many birds maybe due to the time of day and weather conditions, and both involved driving down some deeply-rutted, but fortunately mostly dry, dirt roads. For the Birdathon, we decided we’d focus on three main locations, Washington Ranch, Rattlesnake Springs, and Slaughter Canyon thinking we might make an afternoon visit to Cheapskate Point if we’d exhausted the other locations and the weather improved. We’d had good luck on Birdathons at those three main locations in the past, but for most of us this would be the first time to stay in the few rooms and cabins available at Washington Ranch (with others in their RVs and tents on the property). The ranch itself gets an excellent variety of birds, with lots of fruiting mulberry trees, a large pond and several water features, a wetland area along a creek through the property, all surrounded by more typical desert scrub. Rattlesnake Springs is just next to the ranch, and is also quite the hotspot for good birding. The group of 20 gathered there for a picnic dinner the night before the Birdathon before heading back to the ranch, seeing a few Lesser Nighthawks flying about as dusk faded and hearing a Great Horned Owl near the pond (that we’d find the next day) along with all those Wild Turkeys strutting around and a few of the Vermilion Flycatchers usually seen there. 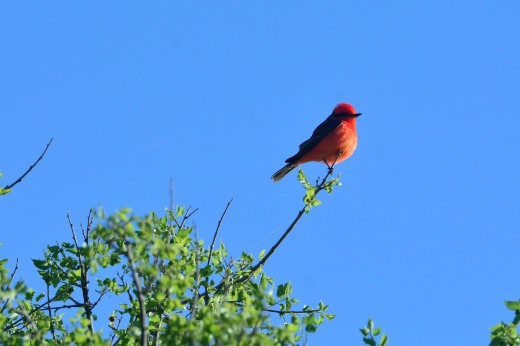 Unfortunately, very early the next morning outrageously stiff winds kicked up that would blow for hours, making it nearly impossible to do any birding and difficult to even be outside. Deciding to postpone the start of the Birdathon for a few hours, we all hung out in the lobby until Rebecca realized the winds had dropped a little and the south side of the building sheltered us pretty well. The mulberries were ripe out there and the birds starting showing up to eat, doing their best against the wind, and we were therefore all out there taking a look. Good birds, too, leading to a respectable total (considering the conditions) of 93 species by the end. One of my favorites, and a bird I’ve rarely seen anywhere, was the Lazuli Bunting, one of four species of bunting we’d add to the list.

We had a good number of Cedar Waxwings show up at several spots; despite the crazy winds blowing I was determined to get this shot of three of them lined up in a row.

As the morning progressed, the winds did die down some and we found there were areas that were fairly well sheltered from it and would turn up more good birds. Of the four oriole species we’d eventually see, I got pretty good shots of Bullock’s Oriole

and the Orchard Oriole.

The Great Horned Owl at the ranch was also easy to see once somebody first located it,

and I also got a pretty good look at a male Western Tanager (one of three tanager species we’d add). 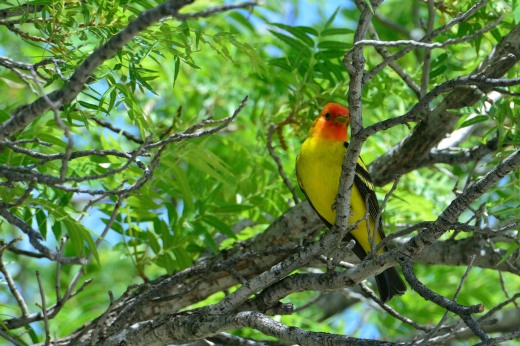 The group would also tally five species of swallow, most zooming around the buildings and the large pond, but two birds I’d at first assumed were swallows circling low over the pond turned out to be Spotted Sandpiper. Here’s a picture of one once it finally landed nearby.

Northern Mockingbirds are fairly commonly seen (and photographed), but this one posed quite nicely for me.

By the next morning, the winds had finally died down and we headed out to Slaughter Canyon for what turned out to be a wonderful day, especially as the clouds burned off. On the way there, one of the team was first to spot a young Great Horned Owl on a snag near the road. 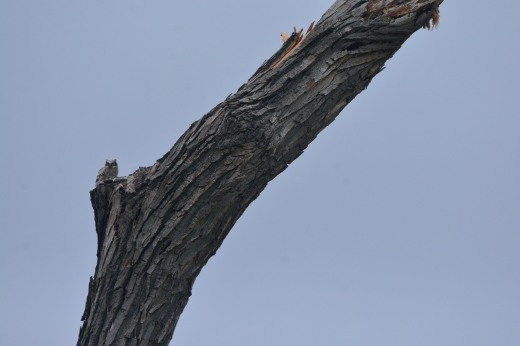 We’d been there the afternoon before looking for owls since we’d seen three little ones there during last year’s Birdathon, but were unsuccessful in seeing any and noticed last year’s tree had since been knocked down. We’re thinking this year’s nest must be right where that little one’s perched since it doesn’t look old enough to fly yet. Looking around we’d also spot both parents a good distance away. On the way back from Slaughter Canyon, of course we had to stop and take another look but didn’t see that baby owl anywhere although Dad was right by the road with Mom still pretty far from the nest tree.

Absolute highlight for everybody at Slaughter Canyon, and a “lifer” for several, was the Varied Bunting. This one let us get fairly close and the lighting was much better than the only other one I’ve ever seen (also in Slaughter Canyon on our 2016 Birdathon).

Focused on the birds those two days, I hadn’t paid much attention to butterflies but had taken a photograph of a Painted Crescent near the wetland area of Washington Ranch,

and on a stop at Bitter Lake NWR on the way home, Rebecca and I were both surprised to see good numbers of Saltbush Sootywing, a species I’ve only seen twice before, once in 2013 and then again in 2014. 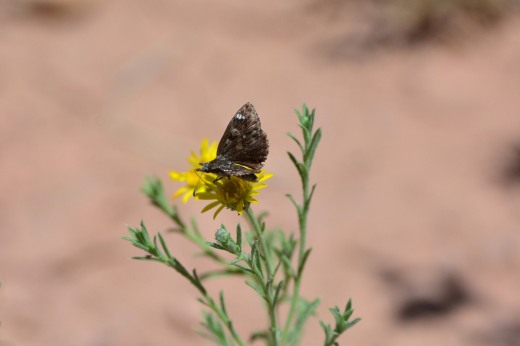 2 Responses to Birdathon and More