It’s been a pretty good week weather-wise for this year’s search for nesting Great Horned Owls. A number of outings to various places we’ve had them in the past and several others that seem promising haven’t yet turned up too many, but I managed to locate two new ones since last week. It must be the time of year, but there really haven’t been many birds showing themselves to me and certainly very few calling or singing to let me know they’re around. Still surprises me, then, how many species we manage to turn up on our Audubon Thursday Birder trips. This week was no exception, with the large group of 37 birders tallying 46 species on a morning trip to the Rio Grande Nature Center. Sure, we get a few more species from all the ducks and waterfowl on the ponds, but those large numbers must have something to do with having all those eyes looking around and spending as much time as we do. One of my friends that morning had good directions for locating this year’s “Campbell Road” owl, nesting in a different spot than the last several years so after lunch a few of us went looking for it. Exactly matching the location description was an old hawk nest high above the trail that had to be it, but we were lucky to catch just a bit of a look at the female from one particular direction before the female hunkered down even lower in the nest.

Pretty cool, too, was one of my friends spotting the male a short distance away and much closer to the ground.

This week’s Thursday Birder trip is to Willow Creek Open Space at the far northern end of Rio Rancho. We’ve had owls nesting there the last several years, and after seeing a report on eBird that one had been seen there the day before, I headed there Saturday morning to see if I could find it. After looking pretty hard without success around where it nested last year, it was back to search mode walking all over the area searching the fairly open trees for likely nesting spots or owl-like silhouettes against the background. Although there didn’t seem to be too many birds making their presence known, now and then one would pop up and ask me to take their picture, including this Spotted Towhee

and a Bewick’s Wren sitting at the top of a small tree singing its heart out.

So, anyway, I kept walking around the loop trail and finally spotted a nice old hawk nest high in a tree right by the trail that I think the owls used a couple of years ago. Despite looking from different directions, I couldn’t see anybody in there. Scanning the nearby trees, however, this rather owl-shaped lump on a branch caught my eye.

Getting a little closer it turns out my hunch was correct. Interestingly, he just sat there with the sun in his eyes and must have been pretending I couldn’t possibly realize he was there since he never once turned to stare right at me like they usually do.

Knowing he was there meant that she was probably in a nest close by, so I took another look at that old hawk nest. Sure enough, she’d moved just enough that I could see a bit of her tail sticking over the edge.

Rumor had it there might be another owl nesting at the southern end of the Corrales bosque, so next I wandered over there to take a look. Although I wasn’t successful in finding it, it was fun seeing two Great Blue Herons high in the cottonwoods. as they usually do, one took off as soon as it detected my presence, but the other one pretended I couldn’t see it and remained sitting there as I went past and was still there on my return. Here’s a shot of it pretending to be just another branch on the tree, but giving me that look that must be the last thing a fish sees before it becomes lunch.

Still reasonably early in the morning, although it was beginning to get cloudy, it had been more than a week since I’d checked in on the owls at Calabacillas Arroyo and Piedras Marcadas. Both places have been interesting since first seeing them again early in February-some days I’ll see them close to where they nested last year and other days they don’t seem to be anywhere around. On that morning, I didn’t see anybody at Calabacillas; either they’ve moved somewhere else or are hiding well. Earlier visits showed they can both hide pretty well and I’d only managed to spot one on my last visit when they made the mistake of calling to each other; she can also get pretty deep in the snag where she’s nested the last two years to avoid detection. At Piedras Marcadas, their old nest has fallen apart and probably can’t be used again. I know of two other old hawk nests in the area, one that seems a little too open and another that looks perfect and was used just last summer by Cooper’s Hawks. The owls don’t seem to be interested in it for some reason as I’ve yet to see them anywhere nearby, and instead have been seeing them near their old nest as if trying to figure out a new plan for this year. On my latest visit, one was hiding out in one of its usual spots, 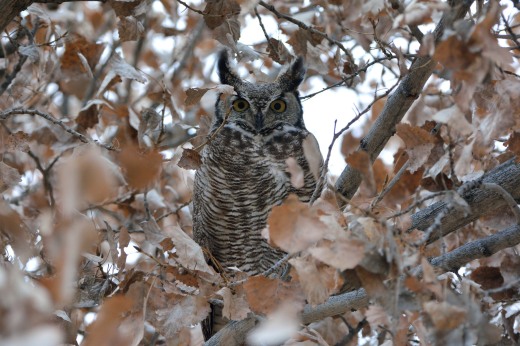 and surprisingly flew off soon after I got that photograph. I’d stumble onto him a little later perched in a very open spot, and again he flew off this time to a little better hiding spot he’d used last year. In my experience, when I do manage to spot an owl in a tree they remain motionless and almost always with a small twig or leaf in front of them to break up their outline and almost invariably are looking right at me; it’s most unusual for them to fly off especially when I’m looking right at them. So I’ll give those guys a break and not visit them very often or move too close once I spot them.

Later in the week had me out looking around a few other promising locations, but so far without success in finding any more nests. Since the trees won’t start leafing out for a few more weeks, there’s time for a few more looks. It’s still February and I’ve already seen five nesting spots and know of at least two others I haven’t gotten around to yet, so it looks like another good year for them. One of those areas was north of the Rio Grande Nature Center where they nested pretty late in the season (May!) last year. Haven’t found them yet this year, but had fun spotting a Cooper’s Hawk hiding in an olive tree right by the Candelaria Ponds viewing blind.

There are also two big old hawk nests in Bachechi Open Space that caught my eye a couple of months ago that sure look like someday an owl will choose, or maybe the hawks will later in the season. I did get a fun picture of a pair of Mallards there, the male displaying that distinctive tail curl.

3 Responses to The Owl Quest Continues