After a chilly start to the week, we’ve broken into a streak of fabulous picture-perfect weather this week, sunny, calm, and temperatures rising almost to 70 degrees over the next few days. The birds out there seem to like it, too, and we’re starting to see more every day. Last week’s Audubon Thursday Birder trip to the Bosque del Apache NWR was still a bit cool, but with the sun shining brought out a good variety of birds for the group. It was a treat to see a rather large group of Long-billed Dowitchers right as we entered the refuge,

and nearby another of those ‘imaginary’ Wilson’s Snipe blending perfectly into the background. We had several Ruddy Ducks on the pond, one of which came close enough to photograph. 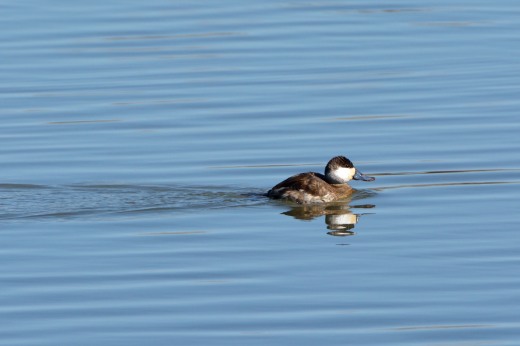 I hadn’t realized before that this is what the male looks like in his winter plumage; by summer he’ll take on a rich brown color and sport a comical light blue bill.

We’d see several Northern Harriers working the fields, a couple of Bald Eagles surveying the water, the occasional American Kestrel, and quite a few Red-tailed Hawks. This one seemed a bit perturbed by all the staring people, but seemed indecisive as to whether or not to take off. 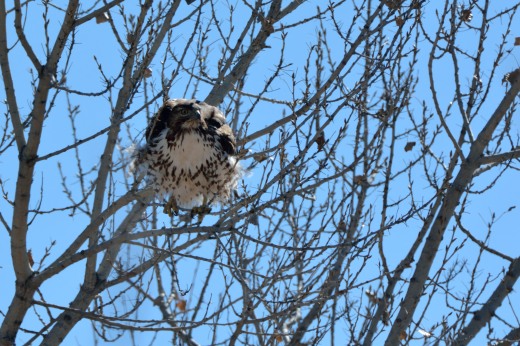 Very few birds on the Boardwalk Pond, but some female Red-winged Blackbirds were darting through the cattails, posing now and then to be photographed.

Highlight for me that day, however, had to be seeing the Western Screech-Owl in a cavity where I’d last seen one on a Thursday Birder trip back in January 2013. Naturally, every time I’ve been there since, I look to see if it’s home, but the cavity has always been empty. We were in the first car since Rebecca was leading the trip that day, so it was great fun spotting that guy as we stopped to give everybody a good look.

Later that day, I posted the picture to Facebook’s Birding New Mexico group page, something I rarely do, and have been surprised it’s gotten more than 115 likes – viral for me!

A couple of days later, acting on a vague tip (Albuquerque Bosque, east side of the river) that a Great Horned Owl had starting nesting, I headed down to the Rio Grande Nature Center to look around. Now the bosque runs almost 24 miles through Albuquerque so the nest could be anywhere, but at least I was on the correct side of the river. Fortunately, I ran into a friend at the Nature Center who gave me a tip that it was close to where they’d nested two years ago. Found the nest pretty easily after that, closer to the river this time and way earlier than these guys usually start nesting.

I was a little surprised that Hawks Aloft had placed signs and fluorescent pink tape all around the general area, which I’d think might draw a little too much attention to the spot, bur learned later it was done to make sure city workers don’t even think about starting construction of a hard-surfaced trail in the area until the birds, protected by the Migratory Bird Treaty of 1918, are finished nesting.

Now that breeding season has begun, several trips have taken me this week to look for more nests in what’s become kind on an annual tradition for me. Haven’t seen any more just yet, but stopped by Piedras Marcadas, where I’d seen an adult a couple of weeks ago near where they nested last year. The one adult was still there, but I haven’t yet spotted the other one or where they might nest this year. 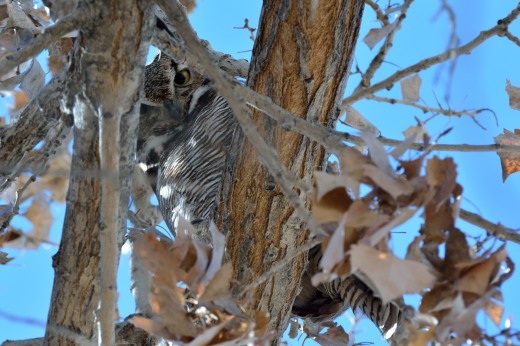 There’s usually a nest somewhere in Pueblo Montano Open Space, so Monday with the weather switching to warm and sunny for a change I wandered around hoping to spot a few potential nesting spots (old hawk nests). It was clear everybody was enjoying the warm sun as a low-flying American Kestrel buzzed by me as I was getting out of the car,  a porcupine was snoozing in the short trees by the irrigation ditch, and this Greater Roadrunner wondering what I was doing in its parking lot. 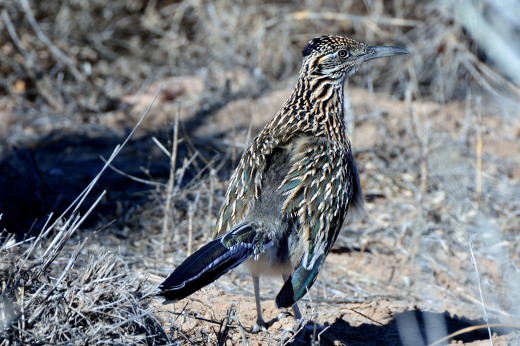 A Bewick’s Wren was just singing its heart out from an open perch high in the willows, taking a break long enough for me to get this picture. 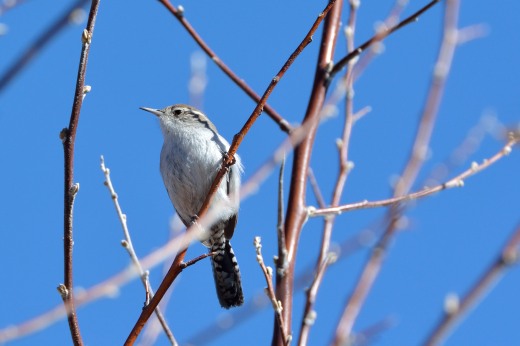 Didn’t manage to spot any owls there that morning, but was treated to a pretty cool porcupine making its way across the ground. 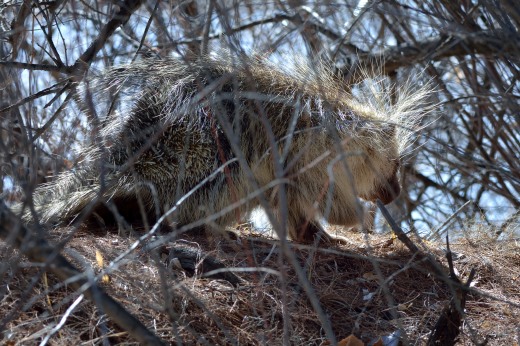 It’s pretty unusual to see them on the ground during the day, and there were 4-5 more typically snoozing away the day high in the trees that morning. This one was also interesting because it was a bright gold color, while they usually look more dark chestnut brown; something age-related? They are fun to watch on the ground, moving slowly enough they think you won’t notice and then curling up at the base of a tree to hide, but showing their business end to the inquisitive. 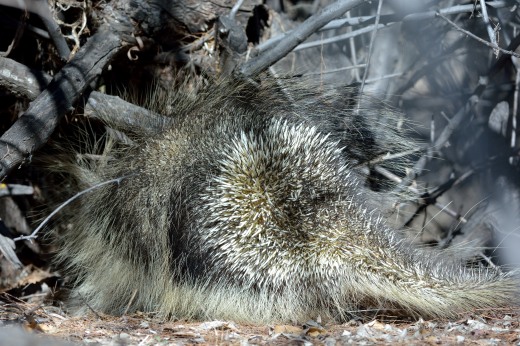 Then it was off to nearby Los Poblanos Open Space, where Liz & Larry had given me excellent directions for finding a Western Screech-Owl in a nest box that I hadn’t known about much further east than where I’d seen them in the past. 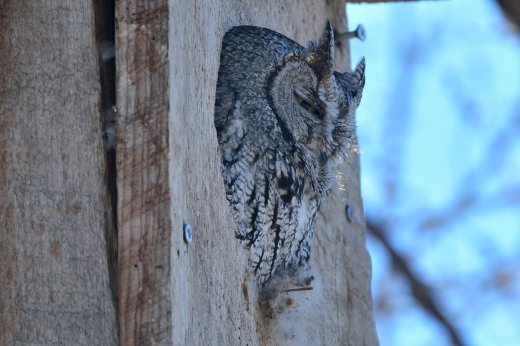 The owl’s obviously aware someone’s looking at it, but doesn’t seem overly disturbed by the attention so it was fun to point it out to a couple of folks walking by that hadn’t noticed.

For those of you keeping track, that’s two species of owls so far this week, Great Horned Owl and Western Screech-Owl. On Monday, Bill Maley, birder extraordinaire, noted that the Northern Pygmy-Owl that he’d spotted last year was back in Cienega Canyon on the east side of the Sandias. It had been seen there (on what must’ve been a gruesome trek) during the Christmas Bird Count, but Bill’s report was the first this year. The Forest Service closes off the road into the canyon until mid-May so it’s a bit of a walk in over mostly snow-covered road, but the weather was so good and the bird so rarely seen, on Tuesday morning I went to check it out. Very quiet bird-wise until I got to the meadow, where things picked up considerably. Up at the upper parking lot, I sat for a few minutes looking for the owl high in the trees without success as a Hairy Woodpecker, Northern Flicker,  and White-winged Dove stopped in the treetops, and a couple of Steller’s Jay and some Red-breasted Nuthatches blew through. Looking closer at where that dove had been just a minute before, however, there was my guy – triple play!

A little surprising to me, a couple of the pictures I got of it show a Red-breasted Nuthatch working the tree right next to the owl and a Northern Flicker flapping around as well. The other birds weren’t really harrassing it as they usually would do, and given that pygmy-owls have a taste for little birds odd the nuthatch seemed unconcerned. No complaints here, tho, and truly a treat seeing that guy.

Wrapped up this week with a visit to the bosque between Tingley Ponds and Bridge Blvd. Two good birds this morning was my first Brown Creeper for the year, 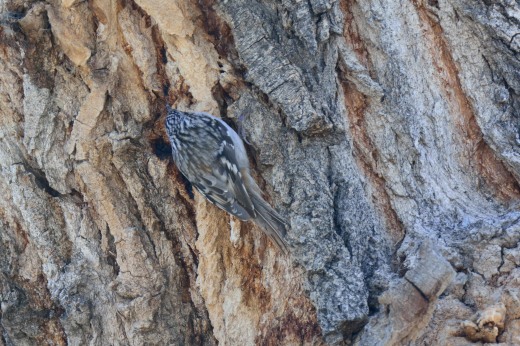 and a stunning Bald Eagle calmly watching me from above. 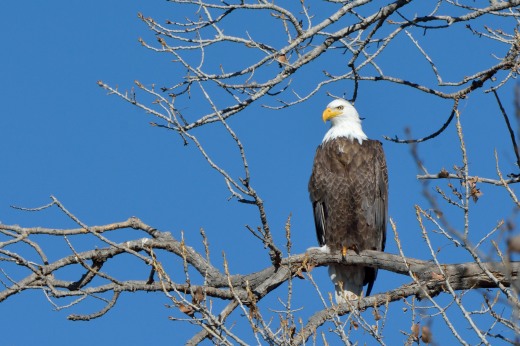