Back to the Mountains

With the monsoon rains starting early this year, the Sandia Mountains were closed for just a week and it is again possible to get up there for the best part of the butterfly season. The last few years it seems they’ve had to close the mountains due to the fire danger for at least a month or I’ve missed the peak season being off traveling somewhere, so it was great to be able to check out a few places there this past week. I wasn’t able to get out until Wednesday to visit at a few of our favorite spots to see if they’d be worth a more deliberate stop the following day.  First up was Ojito de San Antonio Open Space, where I’d forgotten there is a large patch of the butterfly magnet, Dogbane or Indian Hemp (Apocynum cannabinum). In just a short visit, at least 14 species of butterflies were seen around that patch. One plant had five Juniper Hairstreaks on it, 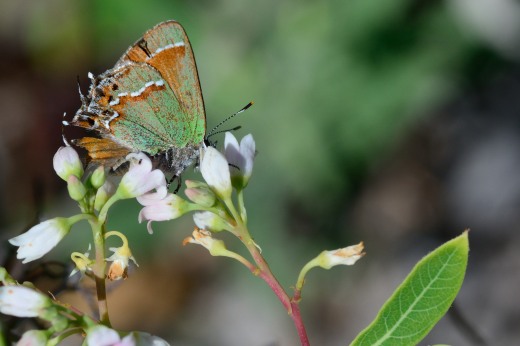 and I’d see my first Monarch of the year, half a dozen Common Wood-Nymphs, and a variety of Blues, Hairstreaks, and several Whites and Sulphurs. Then it was up to the 8000′ foot sign further up the mountain where there is another large area of dogbane. I’d hoped to spot a few of the more uncommon hairstreaks seen there in past years, such as Behr’s and Banded, as well as the spectacular Tailed Copper, but instead had a large number of Northwestern Fritillaries and, my first for the Sandias, a Milbert’s Tortoiseshell. 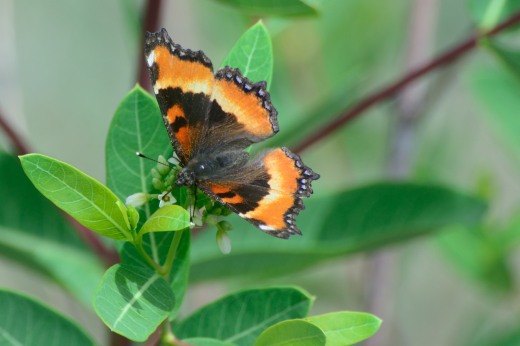 The next day, I met up with Rebecca at the Tijeras Ranger Station for this week’s Audubon Thursday Birder trip. Not particularly birdy that day, the location had been scheduled assuming the mountains would likely still be closed and was a fairly short walk through open habitat. We did see a few good birds, however, including a Downy Woodpecker so busy searching for bugs that it didn’t seem to notice all the people standing around staring at it through binoculars. 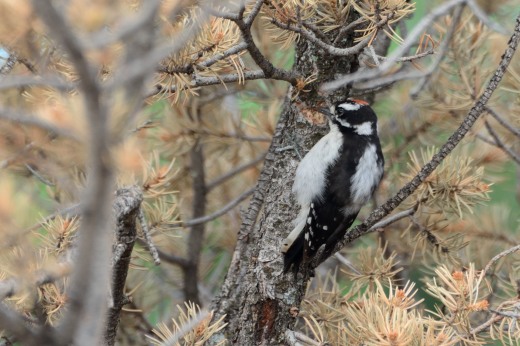 After the walk, Rebecca and I returned to Ojito de San Antonio, the 8000′ sign, Doc Long Picnic Area (and nearby Bill Spring), and Cienega Canyon in search of more butterflies. An excellent day for butterflies, with Gray Hairstreaks 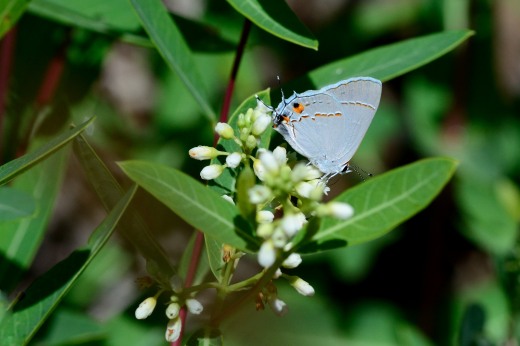 and (new for the season) Dotted Roadside-Skippers at just about every stop along the way. 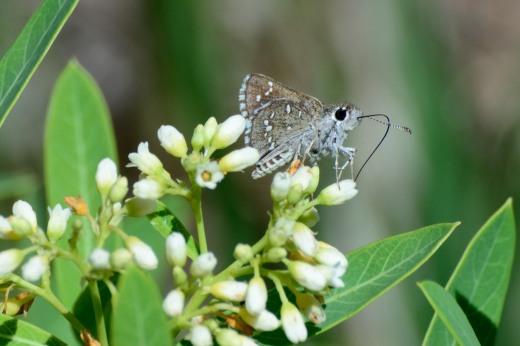 On the dogbane at 8000′, we didn’t see the Milbert’s Tortoiseshell again, but Hoary Commas, a tattered American Lady, and plenty of Northwestern Fritillaries were about. 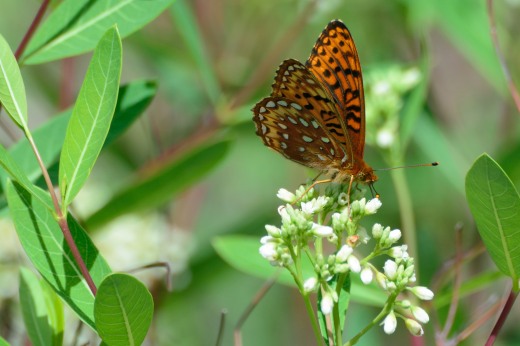 Russet Skipperlings were also busy wherever we had dogbane. 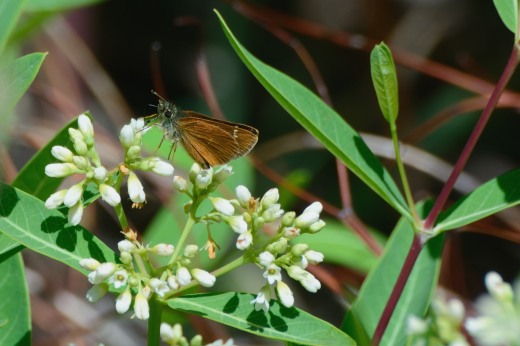 There wasn’t very much water at Bill Spring, but it was good to see the coneflowers, a favorite nectar source for certain butterflies, had started blooming . Right at the entrance to Cienega Canyon and Sulphur Canyon, a flowing creek by the side of the road had a large yellow flowering plant that was quite popular with butterflies. Most of them turned out to be the pretty common Marine Blue, 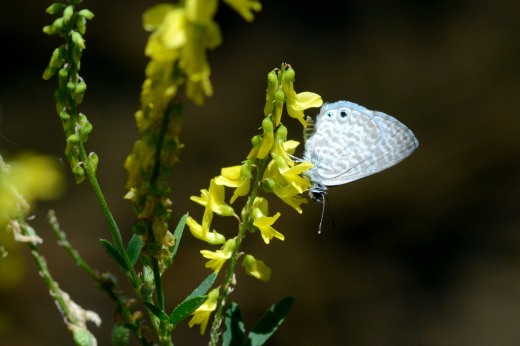 but Rebecca spotted one that looked a little different and would turn out to be one we rarely see anywhere, a Leda Ministreak. 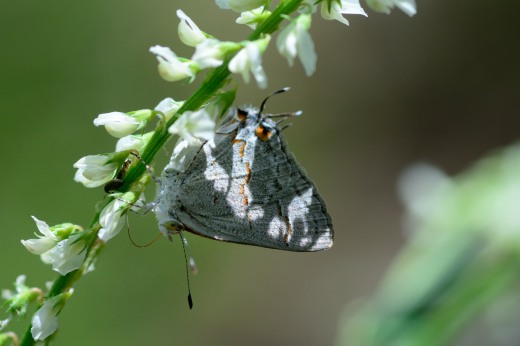 After a most successful day, we decided a return visit to Las Huertas Canyon on the north end of the Sandias was in order for a trip on Saturday. Another perfect day for butterflies, we’d get our first definitive Southern Dogface for the season in a meadow near the Sandia Man Cave that has proven productive in the past. A fabulous puddling spot next to Las Huertas Creek a little further up the road was even more productive than it had been on my earlier visits at the end of June. We first spotted several Hoary Commas, Weidemeyer’s Admirals, and a mixed group of Cabbage Whites and Checkered Whites enjoying the damp sand, but the longer you looked the more species appeared, and most were patient enough to allow for good photographs of them, such as this Taxiles Skipper. 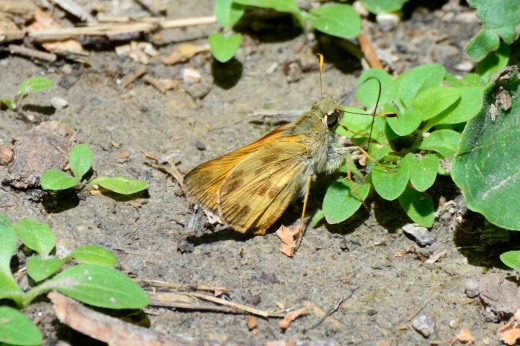 The best surprise of the day, however, was spotting a Tailed Copper in the mix, a small but stunning butterfly.  I’d been hoping to spot one for the last few weeks, and that day we’d see them there at the puddling spot and later on a goldenrod in the picnic area. 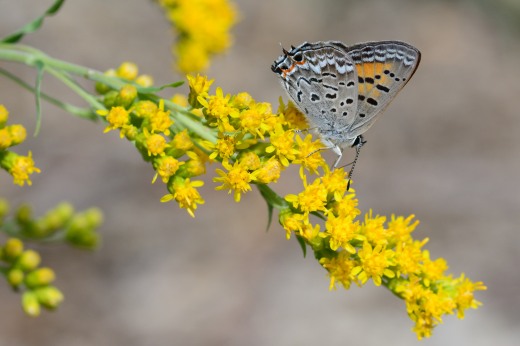 On Monday, it was off in search of birds after hearing that the Mississippi Kites I’d seen nesting in Corrales a few weeks ago now had chicks. Some friends had been there the day before for great looks at one of the adults feeding a youngster, so I’d hoped to get a look. When I arrived, however, it almost seemed as if the nest had been abandoned with nothing moving in the nest and no adults around anywhere. Hanging around for a bit, I soon noticed a pair of adults way high in the sky and as I started to leave, one of them flew down to a favored perch I’d seen them in before. 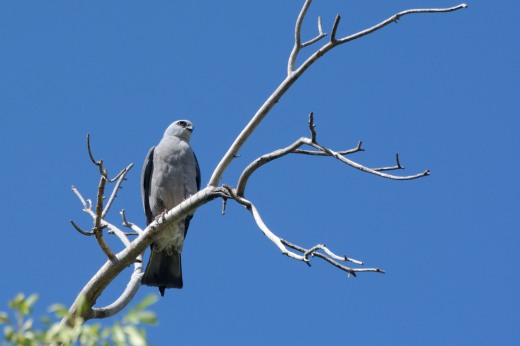 After a couple of minutes surveying the territory, she flew right to the nest and poked around in it for several minutes more, so I’m thinking the young one was in there but just wouldn’t show itself for me. Guess I’ll just have to return for another look soon. Next I headed where someone had reported seeing Burrowing Owls near where they’ve been seen the last several years. Oddly, there have been few reports in town for this species this year, so it was certainly worth a look. I didn’t see any near the burrow they’ve used in the past and later heard the one that had been seen was in a different spot in that general area. Just to follow up, I then checked out another location nearby where they’d nested last year, but again struck out. You know they’re around somewhere, so I may just have to head out looking a little harder and probably a little earlier in the day. One picture I did get that day was of a mating pair of a new species of dragonfly for me, which I think is a Brimstone Clubtail. 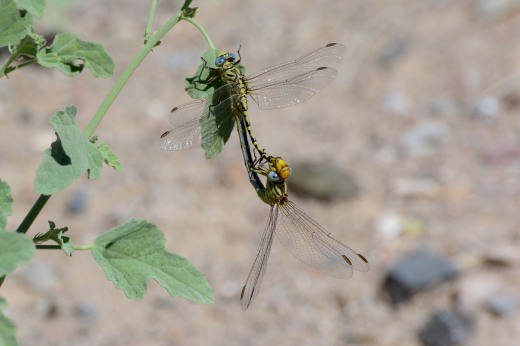 4 Responses to Back to the Mountains