Normally, I try to post a blog update about once a week (unless I’m off on some extended jungle adventure), so it’s a little surprising two weeks have zipped by without an update. Partly, it’s been the weather which keeps switching from winter to spring and back again, but also because I haven’t been seeing many birds or butterflies lately. I’m guessing they’re on some sort of Spring Break and will come flooding in with migration in the coming weeks.

The hunt for Great Horned Owl nests continues with time drawing short as leaves start appearing on the trees. There’s the one I mentioned last time near the Rio Grande Nature Center that I stopped by again today to see how things were going.

On my first visit on February 23, both owls were at the nest with the female hunkered down inside; today it was just her sitting up and pretending to be invisible.

A White-breasted Nuthatch was also in the vicinity today, busy pecking away at the bark and looking around for something to eat. 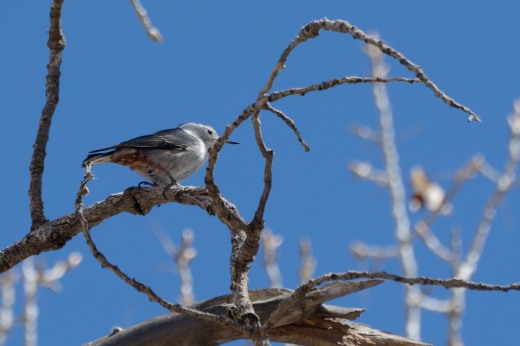 Since then, despite a number of walks in places I’d expect I might see one, I’ve only found one other nest on February 28, this one across the river and a mile or so north near the Open Space Visitor Center.

Same story – two owls right by the nest, but when I went by again today, only the female was in the immediate area sitting quietly on the nest. In all this searching for old hawk nests that an owl might be using, it’s not unusual for one of those odd lumps to turn out to be a porcupine especially in the area around Pueblo Montano and the Bosque School. Just about every time I’m there, I’ll see 4-5 of those critters, including this one that was right over the path close to the school.

This was a good couple of weeks for catching birds in flight, it seems. Both times I checked on the Open Space Visitor Center nest, a Belted Kingfisher was making a lot of racket flying up and down the irrigation ditch.  The first time I got this okay picture of one,

and the same day had a Black Phoebe making its move.

The weather was a lot more cooperative today and allowed me to grab this one of the Kingfisher.

Despite a bit of a chilly morning, the Audubon Thursday Birders had a nice variety of birds in Embudito Canyon on February 27 and met our criteria that it’s always a good day when we see more birds than we have people in the group. Not many photo opportunities that day, but I did get (another) pretty good shot of a Curve-billed Thrasher – birds that sometimes almost seem to beg to have their picture taken.

A couple of days earlier while fruitlessly looking for that Sandia Hairstreak that had appeared almost 3 weeks earlier than normal, there were a couple of Mourning Cloaks flying around (not too surprising since they over-winter and pop out as soon as the weather warms up) 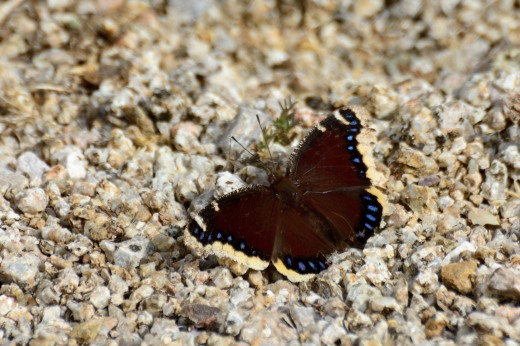 and a couple of Painted Lady butterflies nectaring on the arroyo willow, which was a little surprising seeing them this early and all by themselves on the willow that is usually covered in Litocala moths early in the season.

Back again on Sunday with new friend Cliff to try again for that Sandia Hairstreak. Right at the beginning of our walk, sure enough that hairstreak was right where it had been almost two weeks ago, and the first time I’d seen it again in all that time! Of course, that was pretty much the one and only butterfly we saw that morning, but we had a good time and saw a couple of birds that we hadn’t seen with the group on Thursday, notably the Gambel’s and Scaled Quail.

This past Thursday, the Audubon Thursday Birders were off to Corrales where we wandered the irrigation ditch after parking at the end of East Ella. Perfect weather brought out quite a large group (so unfortunately we didn’t quite satisfy our bird/birdwatcher ratio > 1 criterion), but a good day was had by all. The American Dipper seems to have moved on, but we did scare up a Wilson’s Snipe along the ditch, and got a nice look at a Red-tailed Hawk for a minute before it bailed on us.

Bird of the day, however, popped up right at the end of the walk – a Brown Creeper, hard to see and impossible to photograph, but not seen all that often since they blend into their background so well.

This week, we’re off to Bernardo WMA which should be a good trip and I might stop by the Belen Marsh on the way where I’ve been hearing reports of several Burrowing Owls showing up already.