Spring seemed to arrive just on time this year, with pear trees coming into bloom along with the daffodils and a few wildflowers. That is, up until Tuesday night, when we got blasted by high winds, cold temperatures, and a pretty good dose of snow. Apparently no big deal down close to the river, but those of us near the foothills woke up to windows covered in ice/snow, an inch or so of snow on the roads and landscape, and as sometimes happens, nice deep snowdrifts piled up at our doors. By this morning, of course, most roads are completely cleared and much of the snow has vaporized away. Still rather cool out and no telling what that’s done to those blooming trees or the few butterflies that started flying over the last several weeks.

Still figuring out my new Sony RX-10 iv camera, which was used for all the following pictures. As typical this time of year, it’s fairly easy to spot plenty of porcupines anywhere in the bosque along the river. They sort of jump out at me wandering around down there looking for old raptor nests often used as nests by Great Horned Owl…just look for the lumps in the bare trees; it’s either an old nest or a porcupine. At Pueblo Montano, one can usually spot about a dozen porcupines and often two or three in the same tree. This is one of the better photos of one there on March 11. 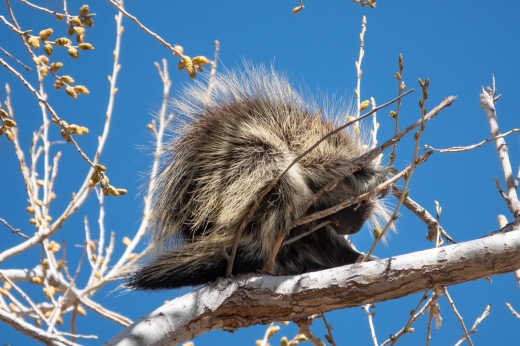 This next picture is a bit different than those I usually post. Late last year, one of my sisters sent me (and the rest of the family) an amaryllis bulb for Christmas. We were supposed to follow the enclosed directions and wait for them to bloom over the next couple of months. Soon enough, everybody else’s came into bloom and on our weekly Covid Zoom call we shared the variety of colors, # of blooms, etc. with everybody. Mine, however, had never gotten started due to my having over-watered it. Taking another shot at it resulted in the following:

Four huge, gorgeous flowers with a fifth in the center that would eventually open as one of the others faded. Great fun!

The next day or so, following the detailed directions of a friend, I tracked down a Great Horned Owl pair nesting in the area of Calabacillas Arroyo. It took a couple of tries, but eventually I found the right spot and could just make out the female’s back as she was sitting in a most unusual cavity.

My friend also gave me ideas of where to find the male. Again, it took me quite a bit of searching to spot him, but you might notice him (as I did) standing out on the left side of that tree just about in the center of this photo.

Without wanting to disturb him, I circled around at a pretty good distance to finally get a better view of him.

A few days later after seeing eBird reports of a nest on the opposite side of the river and closer to town, I took the Atrisco Bosque trail to see if I could locate it. Delightful trail just across the river from the Biopark, I’d never before visited that area in almost 40 years here. Surprisingly easy to spot the nest as the only old raptor nest I came across there, the male was also fairly easy to see. Here’s a wide view with both of them; the male on the left at mid-height on an almost horizontal branch and the nesting female that lump high on the right.

Here’s a better look at the male (taken from a considerable distance with my new 600mm lens).

I’d see a few other good birds that morning including this Cooper’s Hawk.

Pleased with my success, I next headed over to the Rio Grande Nature Center. I’d been twice before to see the tail of the nesting female, but had yet to see her face or to spot the male who had to be somewhere close. Good luck was in store for me as a group of birders there pointed out the male, 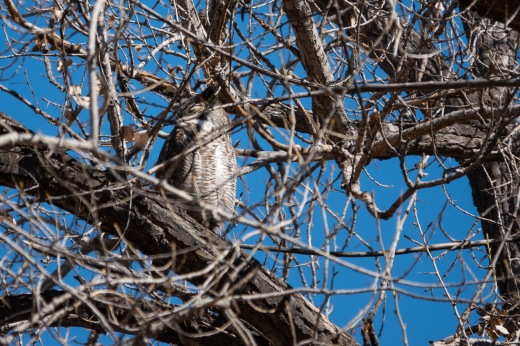 and taking another look at the nest I caught Mom yawning when she sat up a little. 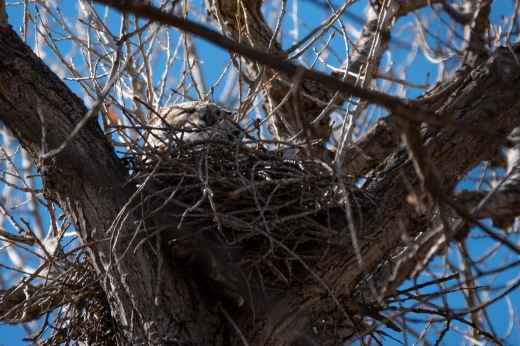 Two other shots from that morning included this Green-winged Teal 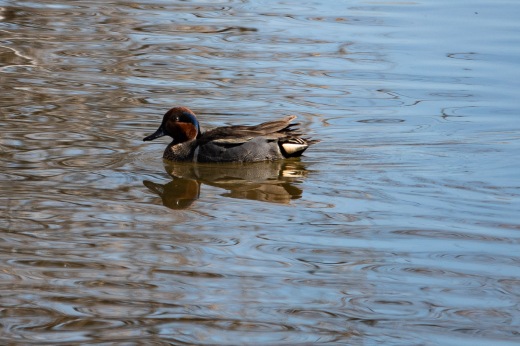 and first of the year for me, Belted Kingfisher. 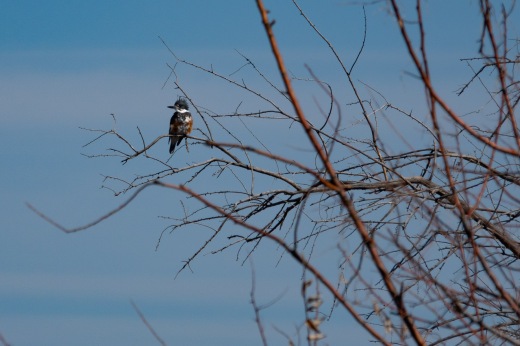 A few days later, I walked a couple of areas of the Corrales bosque that I hadn’t visited in quite some time (if ever) on the off chance there might be another owl about or other photo opportunities. No owls, but it was fun seeing a male Wood Duck rather high in a tree

and later, getting a shot of an American Robin. Robins are being seen in good numbers most everywhere these days, but are so common I rarely feel the need to photograph one; this one came out rather well.

I’d made several passes by the North Diversion Channel after hearing that the Osprey were back and likely to nest again where they have for the last few years. They haven’t quite taken up residence yet, though, but I did finally spot one of the pair on March 21.

I’d also made a few trips to Embudito Canyon whenever the weather seemed suitable for bringing out a few butterflies, in expectation of starting to see the Southwestern Orangetip. In my last post, I mentioned having our first Sandia Hairstreak on March 6. I’ve seen a few more since and usually on their host plant, Texas Beargrass. On March 21, however, I was a little surprised to find one on the willow catkins just above the spring. 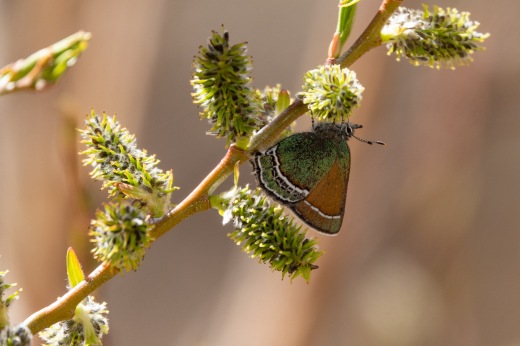 The catkins had just come into bloom, and in addition to the large numbers of Litocala moths present, is one of the spots I check for those orangetips. I would finally spot one (a male) closer to the stand of hackberry trees and working some of the new wildflowers.

8 Responses to Crossing into Spring