Posted on January 5, 2021 by joeschelling

Well, we seemed to have finally gotten past 2020 without any more crazy surprises and there seems to be a reasonable chance for things to get back to something like normal sometime in 2021. Trump, of course, continues to deny reality and attempt to destroy our democracy, but should be put out to pasture for good in about two weeks; wish we could say the same for all those clowns supporting his insanity. We haven’t yet seen another spike in Covid-19 cases due to holiday parties and travel, but imagine we will over the next week or so. Not clear when I’ll qualify to get the vaccine, but am definitely signed up to be notified as soon as that happens.

Meanwhile, I did get out on those three Christmas Bird Counts with Rebecca and had some interesting sightings on other outings over the past couple of weeks. Our first count was the Bosque del Apache CBC on December 19, where we surveyed our usual area north of the refuge to Hwy 380 and the town of San Antonio and added five species to the overall count list that weren’t seen by other participants. One of these was a Merlin, which we spotted out in the open and didn’t seem to mind our getting close enough for a picture.

We’ve seen Loggerhead Shrike in several locations recently, but that day provided my best photo of one. 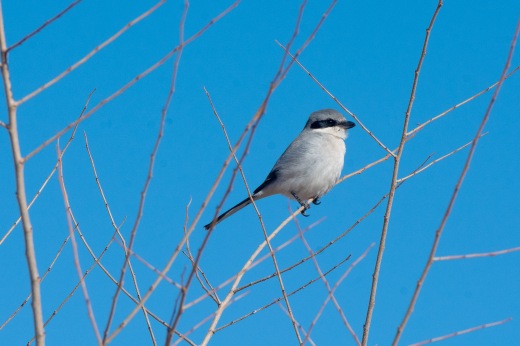 The next morning was the Albuquerque CBC where we were assigned the West Mesa section of the count circle. Rather dry and sparsely vegetated, we weren’t expecting to see very many birds overall, but had scouted the area extensively before count day and hoped to see several species less likely to be seen in other areas of the count. We worked several locations, accompanied by an expert birder friend familiar with the West Mesa, and kept at it until we’d finally seen almost all of our expected targets. Just over 20 species seen (about half the number we’d seen the day before in San Antonio), and I’d only end the day with two photographs, one of our Sagebrush Sparrows from the North Geologic Window area,

and the Red-tailed Hawk surveying the Paseo de la Mesa area that made it difficult to find the Loggerhead Shrike we’d been counting on, but would finally see later that day.

The day after Christmas, we’d meet up with two of our birding friends to cover the eastern end of Bear Canyon from the Michial Emery Trailhead for the Sandia Christmas Bird Count. Of the nearly 20 species we’d see that day, a highlight for me was the Rufous-crowned Sparrow. 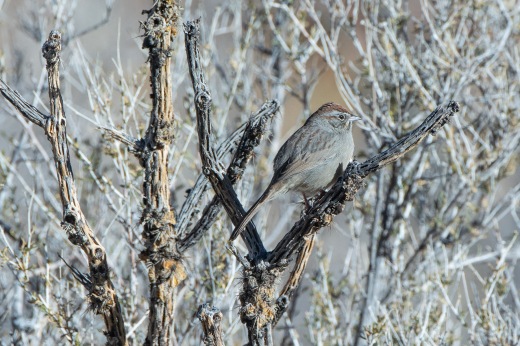 A couple of days later, Rebecca and I headed out to Clements Road east of Albuquerque between the towns of Moriarty and Estancia. This area, especially around this time of year, is usually good for a variety of raptors perched on the power lines or irrigation pivot equipment as well as other grassland species. It may have been the breezy conditions, but we wouldn’t see near as many birds that day as expected, so a return visit may be needed soon. We did get good looks at a Ferruginous Hawk,

and lots of Horned Larks, although the latter were usually quite far away or hidden in the grass. 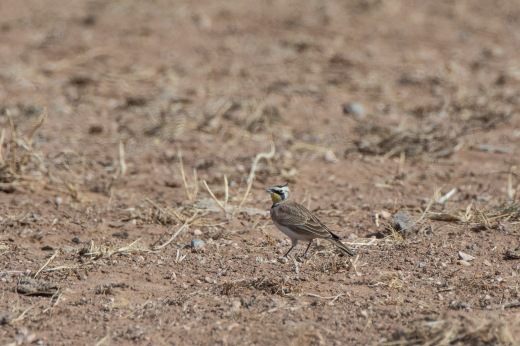 Yesterday, we’d thought it could be fun to check out Coyote del Malpais Golf Course in Grants, NM, about 90miles west of Albuquerque. Absolutely delightful weather, a good variety of ducks and a few raptors, and almost deserted of golfers until noon indeed made for a fun day. One of our very first sightings was of a Prairie Falcon.

Only a few of the ponds had water and of those, one or two remained frozen, but that tended to concentrate the ducks around the open water. Some of the goodies we’d see included  Green-winged Teal, 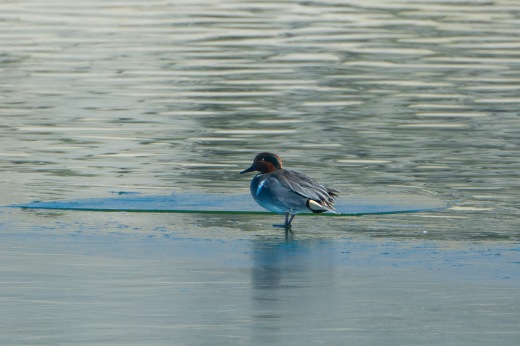 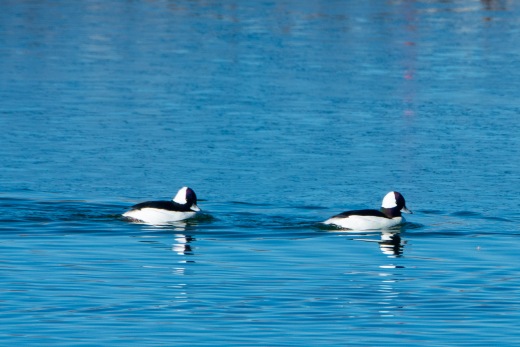 and one I rarely see, Common Goldeneye.

Some of my other outings over the last several weeks have turned up a few good sightings. One morning at Calabacillas Arroyo had a Great Blue Heron in the Rio Grande take exception to my presence by flying away. 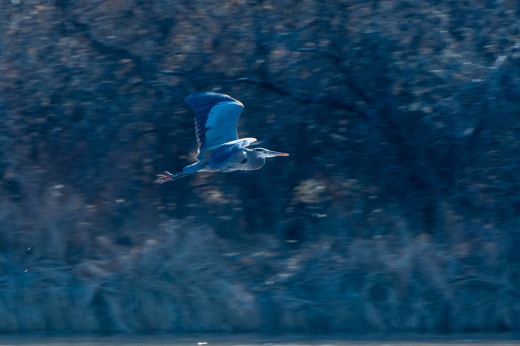 I’ve made several trips to the Corrales Bosque recently, since there are usually few people around and the birds seem to like the habitat near the slow-moving water in the irrigation ditch. An American Woodcock was first seen there during the Albuquerque CBC on December 20 and has occasionally appeared there ever since. A most unusual sighting for our area, it’s drawn plenty of birders hoping to catch a glimpse of it (and making it somewhat more crowded than normal). I take a look every time I’m down there, but have yet to see it. Others, it seems, are willing to spend the entire day in hopes of it showing itself. I did note on December 22 that for the first time since last May, both of the Great Horned Owls have returned hopefully to nest in their usual spot again this year.

Other visits have provided good photo opportunities of more commonly seen species, including a Black Phoebe

I’d never noticed the hook on the tip of their bill before (you may need to zoom in to see it), and am wondering if it isn’t a bit exaggerated in this individual.

Quite a few Song Sparrows have been working the ditch on most visits, sometimes making for a good photo.

Other outings have been to the bosque on either side of the Rio Grande near the Rio Grande Nature Center. Not particularly birdy the times I’ve been recently, but now and then things turn out pretty well. Two days ago on the east side of the river, I’d see this Northern Flicker at quite close range,

and finally get a decent shot of a Bald Eagle.

Heading back to my car, I was surprised to once again see a Wilson’s Snipe working the bank of the irrigation ditch just south of the bridge to the Nature Center, the same spot every once in a while I’ve seen them in the past. 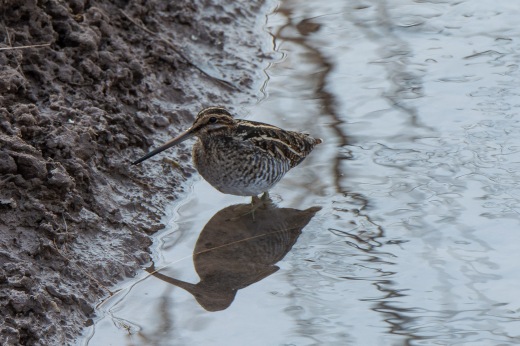