Just less than 3 weeks since my last post, it seems like it’s been a long, long time. Not too many pictures to share this time, but probably due mostly to my just not getting out there as early or often as usual. A couple days after my last post we got a good taste of winter, waking up to about 7″ on snow in the yard but only a couple inches on the driveway; quite a change from the preceding nice warm days. Silly me, I actually shoveled the driveway and sidewalk only to have the rest of it typically evaporate away later in the day. The next morning, a relatively short walk around Elena Gallegos Open Space turned up a few bluebirds, a couple of which posed nicely in the snow-dusted juniper trees for a moment before flying off. 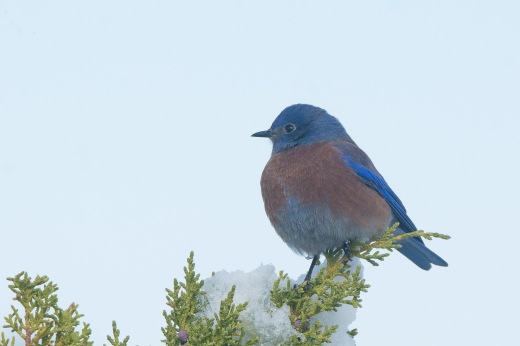 The next day found me at the Rio Grande Nature Center and nearby bosque. While they’re still closed to out-of-state visitors and only open four days a week, they’ve now opened the gate on the west side to provide access to the bosque and Rio Grande. Interestingly, they’re checking resident status at the parking lot, but anyone can wander in through that gate. That included one lad who didn’t have a mask on but at least had his dog on a leash despite the obvious sign prohibiting leashed pets. Anyway, as I crossed the bridge over the irrigation ditch, I was thrilled to see a pair of Wilson’s Snipe making their way along the side of the ditch right where we’d seen them in late February. I pointed them out to a few other people and noticed the next day on eBird that folks had seen as many as five individuals.

Sandhill cranes have also been appearing in increasing numbers every day, most on their way toward Bosque del Apache NWR I imagine. The largest flocks I’ve seen lately have been flying over Corrales; this is the only picture I’ve gotten of one so far this Fall.

Made it to Tingley Ponds a few days later to find a good mix of ducks, Canada Geese, and others, including this Pied-Billed Grebe. 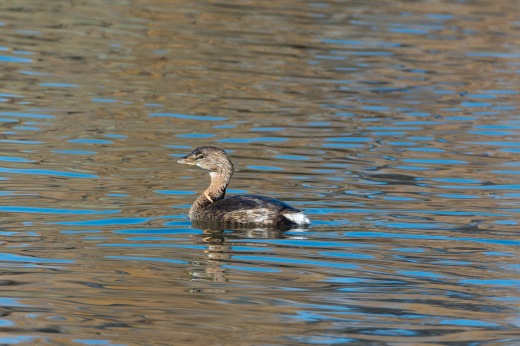 Election Day was the next day and it was a treat to have a small herd of seven mule deer appear just outside my front door, apparently mistaking it for a polling site and interesting in serving as poll watchers. I’d been seeing two or three wandering around recently, but spotted a few of them resting in the grass just as I started to open the door. 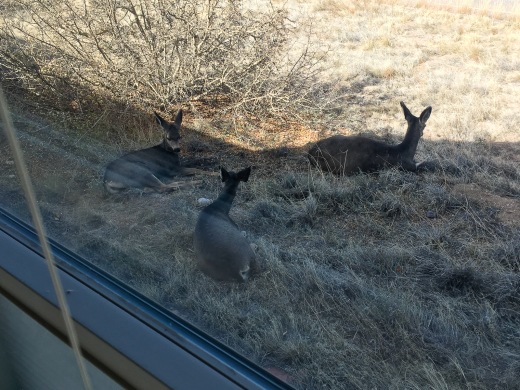 They noticed, but didn’t seem too worried about me.  Over the next hour, I first checked the view from other windows and tried for a few photos; this is the leader of the pack taking a snooze by my patio wall.

Later, I went through the garage and across the street for a few more pictures, and it was fun pointing them out to a few walkers and noticing that just about everybody going by in their cars and trucks would stop to grab a picture with their phones. At the end of the show, one of the females started moseying across the street, stopping for a second for a little one to nurse (no photo unfortunately), and then the rest got up and took their time wandering after her (not a great photo, but taken with my phone) with the male the last to leave.

In the days since, of course I’ve been following the post-election nonsense and growing concerned about the latest spike in Covid-19 happening all over this country (and many others around the world). Ranting about all that on this blog wouldn’t change anything, so instead here’s a photo of a Great Blue Heron I surprised at Calabacillas Arroyo one morning,

and of a Bushtit a little later that morning.

Two days ago on a unexpectedly cool and breezy morning in Corrales, it was fun to spot (as one of the few birds out that morning) that at least one of our Great Horned Owls has returned close to the nesting spot they’ve used the last few years, and the first I’ve seen since mid-May.