My Favorite Time of Year

Early autumn is always my most favorite time of year here in New Mexico with the weather just about perfect, warm and sunny days with little wind and pleasantly cool nights. The bright yellow sunflowers and purple asters slowly give way to the chamisa coming into bloom, and the trees start glowing golden until they lose their leaves. The aspens high in the mountains have already peaked, but the cottonwoods are still building to their crescendo. Things are about to change it seems with cooler temperatures and maybe even snow over the next few days.

Shortly after my last post, Rebecca and I made a run down to Las Cruces on an unsuccessful search for two species of Giant-Skipper butterflies we’d hoped to find. Still interesting as I’d long heard of Aguirre Springs and Dripping Springs in the Organ Mountains east of town but had never visited. This rock formation at Dripping Springs kept attracting my attention with what looked to me like a guy wearing a cap while bringing up his right hand to salute…looks a lot like a few birders I know just about to get their binoculars on some high-flying bird. 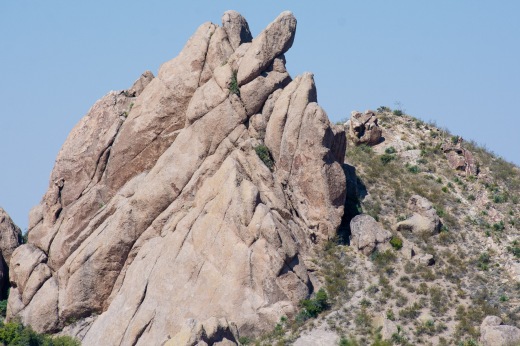 We didn’t see many butterflies at all in either spot near Las Cruces, and rather than reversing our drive up I-25 we headed home by way of Alamogordo and Carrizozo. Another new (for me) place we stopped was the Three Rivers Petroglyph Site midway between Tularosa and Carrizozo. I’d heard about it for years, but was always on my way somewhere else and had never visited. The petroglyphs were interesting in that many of them seemed to use a different artistic style than seen in the Petroglyph National Monument in Albuquerque. A little research suggests the Three Rivers petroglyphs are generally several hundred years older and made by different people. The area seemed to have gotten more rain than most of the state this year and there were quite a lot of blooming flowers. We didn’t see many butterflies, though, until Rebecca spotted some bushes (she later identified as Brickellia eupatorioides or False Boneset) by the Ranger’s home that had plenty. Two that certainly caught my attention was this Great Purple Hairstreak 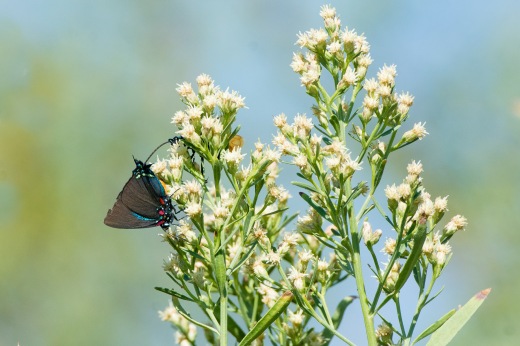 and the first of two American Snouts we’d see.

The trees near those bushes also turned up a Verdin, whose nest we’d later spot in a tree near the picnic tables.

Headed for Socorro and home, we made a quick stop at Valley of Fires where we’ve sometimes seen good butterflies and almost always come across a large Eastern Collared Lizard sunning on the rocks. Didn’t see that one this time (and maybe since it’s later in the year) but Rebecca did immediately spot what is probably a young one.

Arrived home to find a couple of mule deer just in front of my garage. I usually only notice them a couple times every year, but these guys have now put in an appearance just about every day for the last two weeks.

There have been a few good bird sightings on my typically daily walks, although it’s getting old trying to figure out where to go where I won’t run into too many others and then keeping an eye out for folks so I can put on my mask and keep my distance. The virus cases jumped way up over the last week and don’t seem yet to be tailing off; fortunately, most folks out there do seem to be complying with the mask rule.

First up in the birds was another Northern Waterthrush in the irrigation canals in Corrales, a bird I’ve only seen a few times in the past but am seeing there regularly for the last couple months.

One day in Embudito, a Scaled Quail was surverying the scene from the top of the rock close to the parking area that’s always a popular lookout for different birds. Years ago, Scaled Quail were quite common in the foothills, while Gambel’s Quail were only occasionally sighted. Over the last few years, that situation has been totally reversed.

Ruby-crowned Kinglets seem to be common just now, too, and I’d get a close photo of one busy finding things to eat in the chamisa also lining the Embudito parking area. 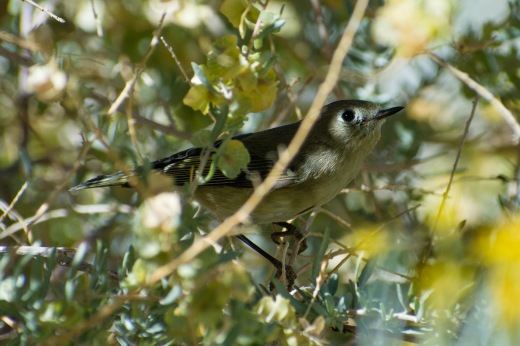 Last weekend, I’d see my first porcupine for the season and will undoubtedly start seeing them frequently as the leaves fall from the trees.

Last Saturday, I saw a Facebook post to the Critters of New Mexico group asking for an id on a moth seen at Bosque del Apache NWR. Recognized it immediately as a Nevada Buckmoth that the woman posting it thanked me for and said she’d seen thousands that day. (Amazing to see her post has had 84 likes – way more than anything I’ve ever posted.)  A very cool moth we’d seen there in the past, so Rebecca and I shot down there on Monday to take a look. They really were just everywhere, sometimes perched and often flying by so we got our fill of photos in short order.

Not much water yet at the Bosque del Apache so we didn’t see too many other birds that day, but did have to wait at one point for a large flock of turkeys to cross the road, and had a Great Blue Heron waiting for us when we got to the Boardwalk (which unfortunately was closed for repair). 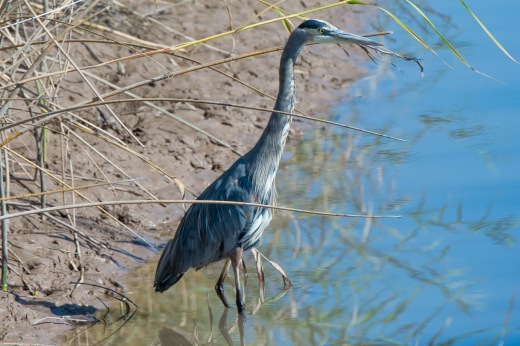 About a week later walking the Corrales ditch, I’d first scare one off when it took off from the ditch while I was still quite far away, and then later seemed to have surprised another one close to the Dixon Road bridge who chose to pretend I couldn’t possibly notice it hiding behind an overhanging branch.

One day up at Cienega Canyon, an Abert’s Squirrel caught my attention high in a tree and I assumed taking a nap. Usually, these guys are dashing about so it seemed a little unusual to see one in that pose.

It wasn’t very birdy or have any butterflies earlier this week in Embudito until I was almost back to the parking lot. I’d first get a nice close shot of a Cactus Wren,

then get a good look at a nearby Ladder-backed Woodpecker, when I was surprised to see a Canyon Wren close to the bike trail. They’re usually much deeper in the canyon hiding among the cliff-like rocks. As I tried to get closer, it flew from a tall rock into the yard of the new houses, so I stopped to wait for it to pop back into view. Took a few minutes, but eventually he flew to the top of the wall for a second before dropping back into the yard….best I could do for a photograph below.

3 Responses to My Favorite Time of Year