Two weeks into summer and there have been quite a few interesting and different things to see out there. Mostly butterflies as usual this time of year, but some good ones that photographed well. With the coronavirus still a threat floating around, I’m still limiting my exposure to other people and trying to get out for birds and butterflies when I’m unlikely to run into others and certainly not anywhere close. The day after my last posting took me to Elena Gallegos Open Space quite close to my house. The parking lot can be rather full, and they’ve started charging an entrance fee again, but it’s rare to meet others on the trails and it can turn up some good sightings. Not much to see that morning, but I noticed several Fulvia Checkerspots (a butterfly I’ll see most years but usually only one or two individuals).

About the only other butterflies I’d see that morning were on a blooming milkweed…the only nectar source in the area which had three Juniper Hairstreaks working on the same flower head. 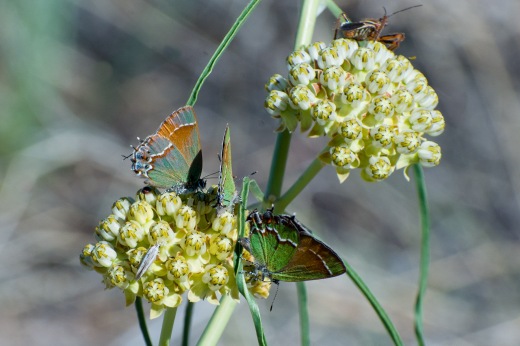 A couple of days later while wandering around Calabacillas Arroyo, this Bewick’s Wren popped up to give me the once over. 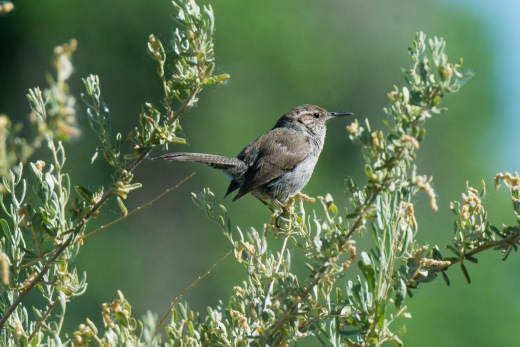 Toward the end of the week Rebecca and I repeated a 2013 trip, based in Eagle Nest but with stops at Coyote Creek, Cimarron Canyon, and Angel Fire and this time adding a stop at Santa Fe Ski Basin on the way home.  Because of the virus threat, we again drove separately and brought our own food; it was comforting to note later that Eagle Nest is one of the few spots in New Mexico with no recorded cases of Covid-19 (at least as of today). Although we didn’t manage to spot a few species we’d seen there in 2013, we enjoyed finding several new places to look and had good luck spotting a few new ones and coming across large numbers of several species. One highlight was coming across lots of Ruddy Coppers in a new area for us at the south end of Eagle Nest Lake, and first of that species I’ve seen in New Mexico.

We first saw them in the afternoon, but returned early the next morning to find them hanging out in the same area. Along with large numbers of Ruddy Copper, we also spotted a couple of female Purplish Coppers. 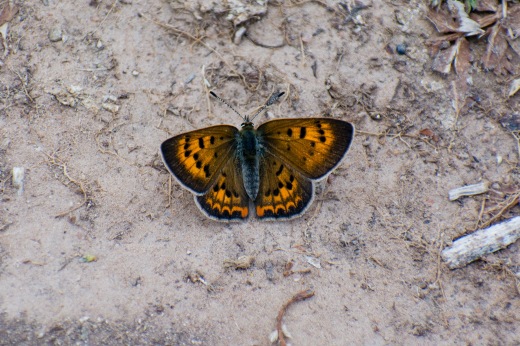 At other spots near the lake and again at a spot we randomly stopped for lunch in Angel Fire, we saw good numbers of Spalding’s Blue, a species we’d been looking for recently but hadn’t seen in years.

There were lots of prairie dogs running around near the lake that I couldn’t help but photograph when they’d pose for me.

In a couple other spots, we’d come across a few Square-Spotted Blue butterflies.

One morning, we’d driven into Cimarron Canyon looking for a patch of dogbane we’d seen in 2013 full of good butterflies. We indeed found the spot, but it seemed somehow smaller and with the weather clouding over wasn’t attracting very many butterflies. Heading back, we pulled into Colin Neblett Wildlife Management Area and with the clouds still keeping the butterflies hidden started looking for birds. Rebecca almost instantly spotted an American Dipper (a second one would appear) working the river and we soon had several other species popping in and out in the same area. Entertaining enough that we got out folding chairs and just sat there watching the show. Here’s one of the many shots I got of the American Dipper

and here’s one of one of several Song Sparrows that showed up. 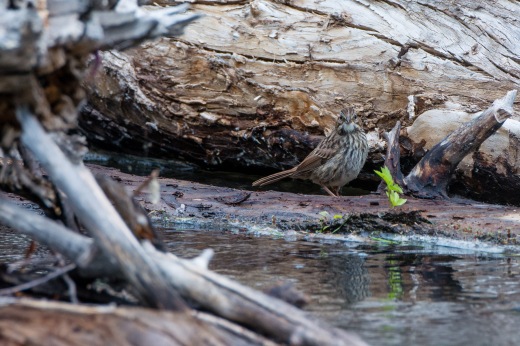 Giving the area around the parking lot one last look before we headed back to Eagle Nest, Rebecca spotted an Orange-headed Roadside-Skipper, new for my New Mexico list and a species I’d only seen once before in Arizona. 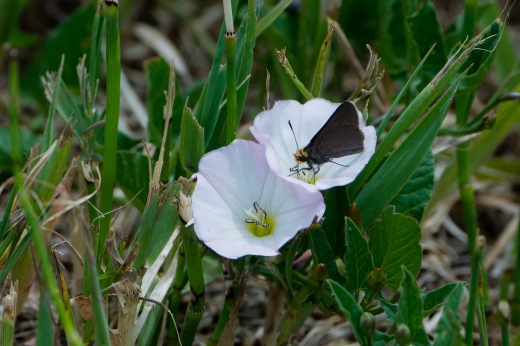 That afternoon looking around near the Eagle Nest Lake State Park Visitor Center, we’d spot a couple of good butterflies but got excited near the end spotting one down near the water. I remember calling out “Weidemeyer’s Admiral?” when we first saw it, but was convinced it had to be something new since it seemed so much more colorful than the ones we see around here. It was a bit disappointing to conclude from looking at our field guides that it was indeed a Weidemeyer’s. Once I got home, sure enough, my other pictures of them have the same basic appearance but none as vividly as that one.

Our stop at Santa Fe Ski Basin on the way home proved productive as well, turning up such sightings as Draco Skipper

and Common Alpine, the only location in New Mexico I recall seeing those species,

One day last week, with nothing better to do I headed down to Los Poblanos Open Space on the off chance of seeing one of the Lazuli Bunting birds that folks had been talking about on Facebook for awhile. Those reports suggested looking in the big sunflower field next to the garden plots in the NW corner and to listen for their song. While I never got quite as close as I’d hoped, it was fun hearing one easily enough and soon spotting it singing just as predicted. It would sing a few bars, then sit quietly for a bit before winging off to another part of the field to put on another show.

While hanging around the garden waiting to hear the bunting again, I kept seeing a dark swallowtail butterfly that never landed and would disappear before I could identify it. Keeping an eye out for it, eventually two of them appeared, one landing on the coneflower for a few photos and identification as a Black Swallowtail, a species I don’t often see. 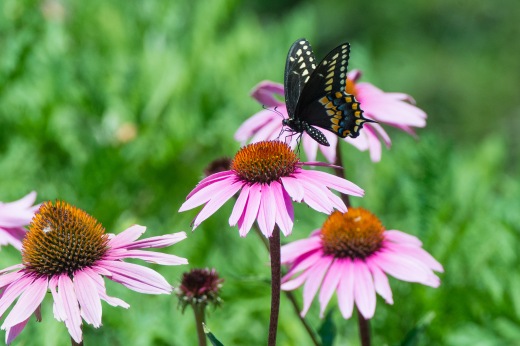 A quick visit to the Common Edge field at the Open Space Visitor Center turned up another Band-winged Meadowhawk. 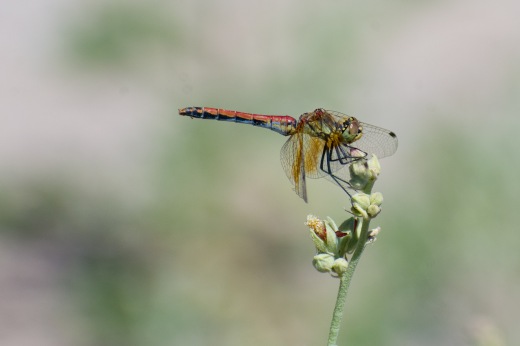 Last Thursday, Rebecca and I headed to Capilla Peak in the Manzanos on the highly unlikely chance of seeing an Ursine Giant-Skipper. It had been seen once there years ago but we thought we might get lucky. She’d been there for birding in the past, but not for butterflies; I’d heard of it forever but had never been. A bit tricky driving the last stretch of the 9 mile dirt road to the peak, but not really all that bad. No luck on the target species, but at the top we’d get nice looks at Taxiles Skipper

and another highly photogenic Two-tailed Swallowtail.

On the drive up we’d noticed several patches of bee balm, a plant that’s known to attract a variety of butterflies. Working our way slowly back down the mountain, we’d planned to check out a few of those spots and maybe take a look at the spring at New Canyon Campground a little more than halfway. At each of those spots, there might be a Northwestern Fritillary on the bee balm, but we would be astonished at all the butterflies we’d see on the horehound mint and white clover that were also blooming nearby. One of the first species Rebecca would spot was a Leda Ministreak, a species we’ve been seeing in quite a few locations this year. 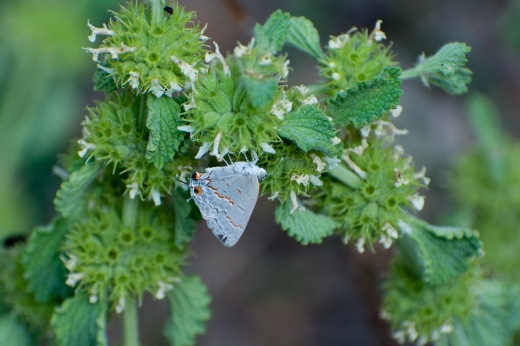 We were a little surprised to see a single American Snout, a Dark Buckeye, a couple of Funereal Duskwings, and even a Great Purple Hairstreak (another species we’ve seen more of this year than in the past).

There were also plenty of the more commonly seen small species, but the highlight of the day was seeing a total of six Nais Metalmarks, a species that should be around but that we’d only seen once before in Arizona and never in New Mexico. 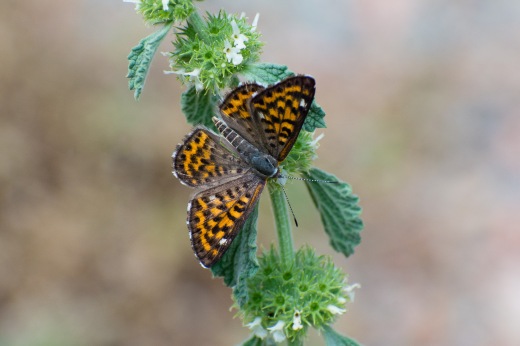 Valencia County has only recorded a little more than half (73) the number of butterfly species as my home county of Bernalillo (131). Just south of Bernalillo County, Valencia County is more agricultural and desert-like, which may account for the difference in numbers or people just may not have been looking all that often. Thinking we might search for some new locations and maybe track down a County record or two, on the Fourth of July Rebecca and I drove down to Los Lunas thinking to take NM 6 toward the Rio Puerco looking for potential butterfly spots. It’d been years since I’d even driven that road, and it’s been closed for construction for the last several years. Unfortunately, without much in bloom at the moment we saw very few butterflies. At one spot, Rebecca did spot a Dotted Roadside-Skipper, which was cool to see but flew off just as she pointed it out to me. And at another spot closer to the Rio Puerco, she’d pick up on a Saltbush Sootywing that I did manage to photograph and which will give Rebecca another County record when confirmed.

Had to stop by Owlville to see how the Burrowing Owls are coming along, but most of them that day seemed to be holding a meeting in their burrows and we’d only spot single individuals at a few of the nesting areas. Just as we were headed out, however, a dark patch under a tumbleweed caught my eye which until I got my binoculars on assumed was just a piece of tarpaper or black plastic – nope, turned out to be a single Burrowing Owl quite close to the road.