For the last two weeks, it’s mostly been about looking around for more owl nests and checking on the latest status of those I’ve found. Before we get into that, here’s a couple of other pictures I’ve gotten since my last update. A week ago while at the Rio Grande Nature Center for their annual Friends meeting, we’d heard about Wilson’s Snipe being seen from the bridge over the irrigation ditch and decided to take a look. Sure enough, two of them were right there working along the bank and unusually oblivious to the presence of all the people going by or stopping to give them a look. They would duck behind the overhanging grass now and then, but soon reappear and go about their business. 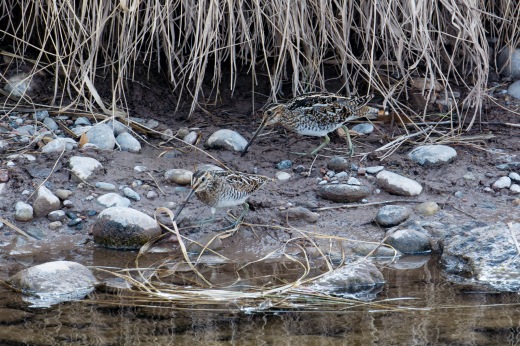 That week’s Thursday Birder trip to Tingley Ponds turned up a nice number of species, only one of which I managed to photograph, a Pied-billed Grebe.

Naturally, my camera was nowhere ready when a young Bald Eagle came flying low right over the crowd. I did get organized pretty quickly the next day as a Cooper’s Hawk flew by during a visit to Embudito.

Now, about them owls.

Last time, I’d reported that we were thrilled to find owls nesting near Calabacillas Arroyo where we’d last had them nest back in 2017. I’d gotten a photo of an adult at the nest site on two visits and had heard reports of at least one owlet being seen in the nest cavity already (which would be astonishingly early in the season, and normally I expect to start seeing active nesting around Valentine’s Day). Stopping by on February 18, I did indeed see an owlet peeking out.

Way beyond the “fuzzy tennis ball” stage when we usually first get a look at the little ones, it was even more astonishing to hear the owlets had started “branching” the next day, moving out along the branches of the nest tree before they learn to fly. Of course, I got back there a few times over the next several days to see and here’s what they looked like by February 29.

In my last posting, I’d also mentioned finally seeing both adults at Willow Creek Open Space back in early February, but they hadn’t started nesting. On February 20, the Thursday Birders were at Willow Creek and fully expected to see the owls in that same spot, but were completely unsuccessful. We also looked pretty closely at the only old hawk nest nearby but saw nothing. That’s happened to me before…at Pueblo Montano last year we’d reliably see the adults near a previous nesting site for weeks until one day they vanished only to find them nesting almost a half mile away.

Dropped by Willow Creek yesterday, again didn’t see anybody where I’d first seen them, did the whole loop trail again looking at other possibilities without success, and just like my first time thought to give the original location another look. This time, yep, Mama Owl was sitting on that old nest (where she probably was on the Thursday Birder visit), but I just happened to take a look from a little different angle. 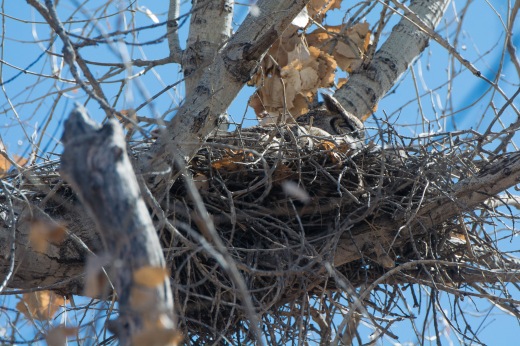 In other news, I’d been to the aforementioned Pueblo Montano area a few times looking for owls particularly after seeing a recent eBird report. It was satisfying when I finally spotted the nest to note that of all the old hawk nests around, they’d settled on one that I’d thought looked like the best on my earlier visits. 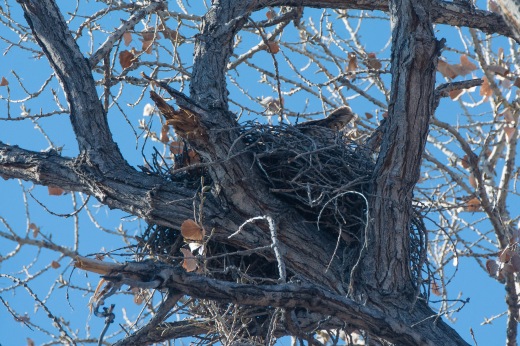 One more new nest to report – I’d seen a photo on Facebook yesterday of an owl looking out of a nesting cavity at the Rio Grande Nature Center, and was definitely headed down there today to try and find it. We usually have at least one nesting pair in the vicinity and have been looking regularly without success, so it would be a relief to finally find it. Turns out it’s right next to the entrance walk but only visible from the restricted area. Fortunately, the regular weekend walks there do get to visit that area and I was able to get a photo. Unfortunately, she was kinda tucked in there this morning and this is all one could see. At least we’ll be able to take a look every weekend and once the little ones are old enough might get to see them more easily. I did look pretty hard for the male this morning but without any luck.

I’ve also checked in on the Corrales nest a few times, but all I ever see (other than the male keeping an eye from across the irrigation ditch) is a single telltale feather above that cavity. I did hear a report that the female was seen peering out of the cavity yesterday, so maybe we’ll be seeing little ones there soon.

A visit to the Albuquerque Academy today showed the female still sitting on them eggs,

but this time I also saw the male perfectly obvious in the next tree over. 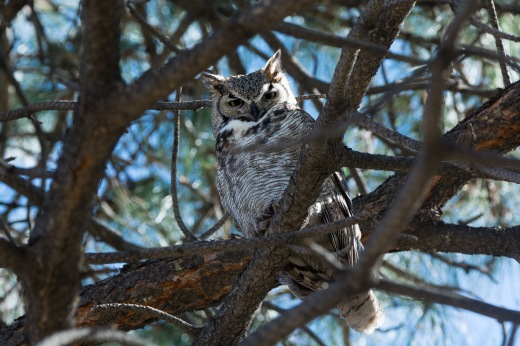 So here we go. That’s a good half dozen nests going on so far this year; no doubt a few more will be discovered in the next few weeks.