Posted on September 17, 2019 by joeschelling

Surprising to realize it’s been three weeks since my last posting, so I wanted to get some of the few photos up there that I’ve taken during that time. No particular reason, I just haven’t gotten out there as often and haven’t gotten all that many pictures when I do get out there. Our Audubon Thursday Birder trip to Las Huertas Canyon at the end of August turned up a couple of good butterflies including views of both sides of an Arizona Sister, first the dorsal view

and then the ventral.

I’d also get what is probably my best shot ever of a Canyonland Satyr that hung around long enough for most of the group to see.

The next day, Rebecca and I made the fairly long drive up to Springer and then down to Mills Canyon wanting to check on some butterfly spots that had been quite good a couple months ago. Unfortunately, those spots hadn’t gotten much summer rain and there weren’t many nectar sources available so the butterflies weren’t around. Before heading home, we took a look around Las Vegas NWR and had fun seeing a few good birds including what I think we decided was a young Swainson’s Hawk.

and plenty of Say’s Phoebes and American Kestrels perched in different spots.

Just a couple of days after our Springer trip, we were at Valle de Oro NWR to do a little scouting for last week’s trip and just happened to notice a few interesting flowers blooming in the weeds. Got home later to identify it as Hibiscus trionum.

Interesting to note one of its common names is Flower-of-an-Hour (some other common names include bladder weed, modesty, shoofly). It’s called that because “each flower blooms during a single day that is sunny, and remains open for only a few hours.” Who knew?

We’d also see a few young Snowy Egrets by an irrigation ditch where they’d still be more than a week later (Huge numbers of Cattle Egrets would also be seen off in the NW corner of the refuge.)

The next day on a walk at Pueblo Montano Open Space one of the few birds I’d see was a female Wood Duck parked right next to an American Bullfrog. Just the day before a friend had posted a similar picture from a different location, and both of us had wondered how common that is since we’d certainly never noticed it before. 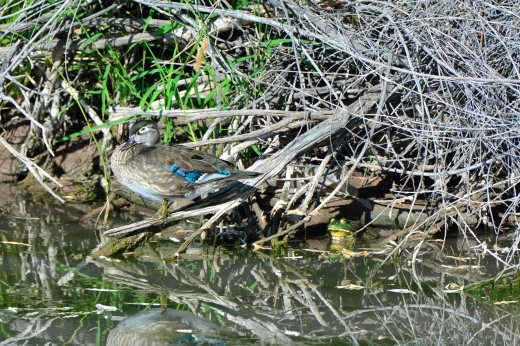 Last Saturday, we decided to check out the new butterfly exhibit and Bugarium at the Biopark. In a good way, the new exhibit only has native butterfly species rather than some of the fancier neotropic ones kept in the original butterfly pavilion. These included a number that we’ve only seen in in the wild in South Texas and Florida, such as the White Peacock, 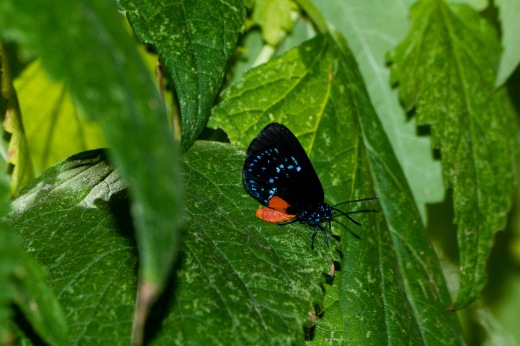 Bugarium was pretty cool, too, with lots of unusual stick insects, some leafcutter ants, scorpions, beetles, and others.

Later that evening, we headed down to Sevilleta NWR for their Moth Night that included a twilight stroll around the Visitor Center for some good bugs. Just like last year’s event, we’d see quite a few walking stick insects in the Broom Dalea and on the stucco walls, and this year found several different spiders, many of which were Black Widows. 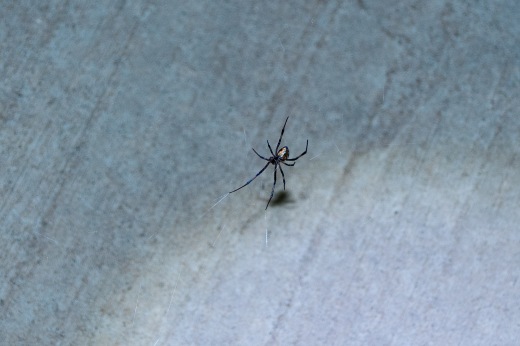 For the moth part, John Wilson had his blacklight set up when we arrived and Rebecca brought hers along to add to the fun. We’d see a good number of moths, mostly small ones and several that we’d never seen before. My pictures weren’t that great, though, so none of them are included here (If anybody’s interested, they’re posted on my New Mexico Moth page at http://www.sandianet.com/moths/index.htm.). As usual, other insects attracted to the light would show up while we were looking at the moths, including a couple of katydids, grasshoppers, and antlions.

Months ago, I’d picked up a UV LED flashlight that I’d heard were good for spotting caterpillars and spiders that fluoresce under the UV blacklight. So far, it hasn’t seem to work to well for that purpose and I’ve only noticed a few small spiders that seemed to give off any light. But when I thought to point it at a stucco wall near where we’d been seeing moths, this scorpion just totally lit up from probably ten feet away. 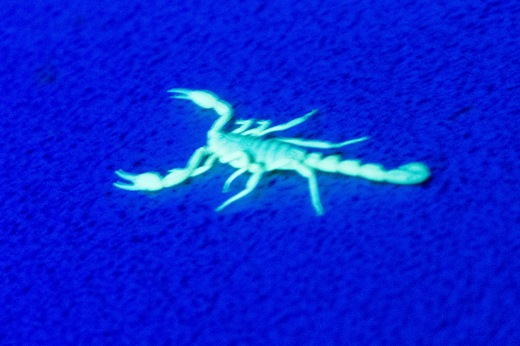 That’s more like it! Guess I’ll bring that little flashlight along on future night explorations.