Not Just Birds and Butterflies

A nice variety of new and interesting creatures since my last posting along with a few old favorites. In addition to the birds and butterflies I post regularly, this time there’s a few moths, spiders, a new for me lizard, a mammal I haven’t figured out yet, and a few other interesting insects.

On most of my recent trips looking for butterflies in the Sandias, the tachinid flies have been present in large numbers and are rather interesting if viewed closely.

One of those trips to Cedro Canyon turned up a Milkweed Tussock Moth caterpillar; I’d thought only Monarch butterfly (and its cousins, the Queen and Soldier) caterpillars ate milkweed because it contains toxins disliked by predators.

On Saturday, August 17, Rebecca and I drove down to Whitfield Wildlife Conservation Area to look for butterflies and to check the visitor center walls for any moths that had been attracted by their lights the previous night. A little surprising to me was how many different moth species we noticed, most of which Rebecca was able to readily identify (I’m still too new at this moth thing to easily identify any of them.). Among them was the Salicet Sphinx Moth,

and this small, but very cool looking Purslane Moth, one of which we’d seen during the White Sands Mothapalooza at the beginning of August.

Target butterfly of the day, of which we’d see a good number and typically only see at Whitfield, was the Bordered Patch.

Another day, I made a visit to Owlville to see how things were going and assumed there would still be a good number of young Burrowing Owls about since we’d seen quite a few in Torrance County recently. Either it was the wrong time of day or more likely too late in the season, but I’d only manage to spot a total of two of them hiding under bushes. There were some guys out there busy drilling a well or some such that day that may also have sent the birds into hiding. 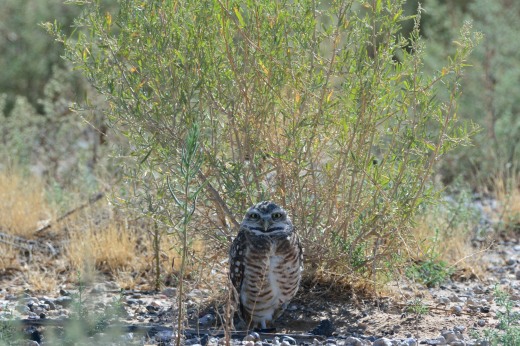 Just a couple of days later, after hearing about it from a friend, it was off to an arroyo at the north end of Rio Rancho for a Barn Owl. I’d long suspected that area might be used by owls or other raptors in addition to all the Bank Swallows that nest there. I’d  heard about this Barn Owl a few years ago but had yet to see it. This time was lucky as there it was peeking out of a large cavity I noticed from still a good distance away. 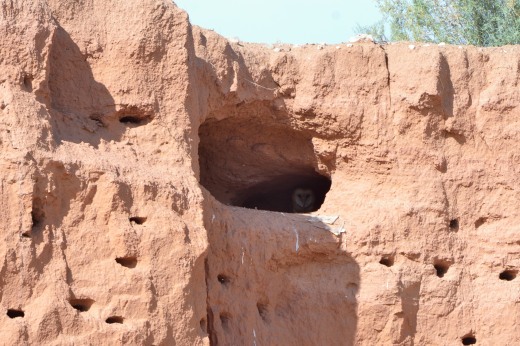 It had been watching me the whole time, however, and decided to fly off to better hide in a nearby big cottonwood tree.

Having been successful at seeing two owl species in recent days, I also stopped in on a Western Screech-Owl to see if it was around (nope). A nearby tree had a critter sleeping away the afternoon. I’d expected it would be a porcupine from its size and behavior, but it’s clearly not one of those. Too big for a squirrel, not the right color for a skunk or weasel; maybe a raccoon?

Rather slow day for butterflies in the Sandias last Friday, but we did get a good look at a Common Wood-Nymph in Ojito de San Antonio Open Space,

and a good picture showing all the colors of the top of an Arizona Sister in Sulphur Canyon. 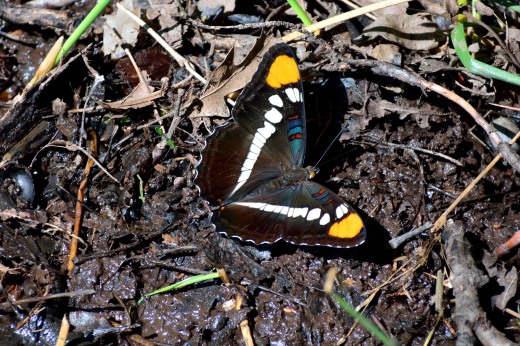 The day before had been a good Audubon Thursday Birder visit to Alameda Open Space, but my favorite sighting and photo from that day is of a White-belted Ringtail dragonfly, a new species for me and one that sat there patiently for quite a long time for all to see.

It was also a treat a few days later to spot a similar-looking Brimstone Clubtail on a walk in Corrales, this one munching on a damselfly.

That same day, I stopped to check in on the Osprey that had nested at the North Diversion Channel Outfall since about late May. I’d known they’d successfully raised three young ones this year, but assumed they had probably moved on by now. It was entertaining to see one of the adults perched on top of the power pole leisurely digesting what looks like a large piece of salmon while below a nearly mature young one perched on the nest calling incessantly to be fed. 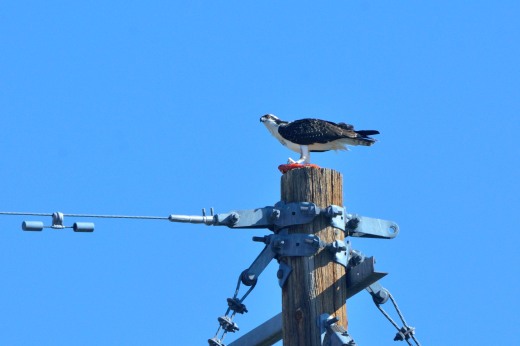 Last Saturday, Rebecca and I joined in on the annual butterfly count at Sevilleta NWR and had a fun day seeing a few species we don’t often see along with a nice variety of other interesting creatures. About the first thing we’d spot that morning was a new for us moth, the Clio Tiger Moth.

Shortly after getting a few pictures of it, Rebecca brought the count leader over to show it to him, arriving just in time to watch a lizard crawl down the stucco and snatch it for a snack. We’d see several species of lizard that day, some of which were new for me including what I’m thinking is a Long-nosed Leopard Lizard. 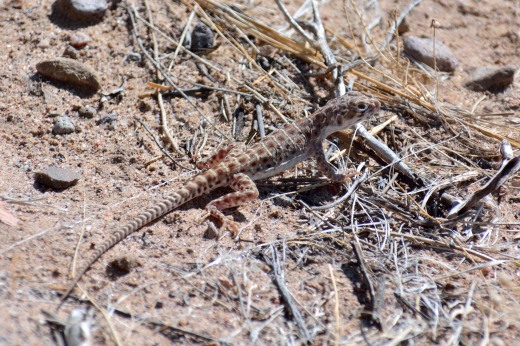 Later in the day, a Reginia Primrose Moth was spotted hiding in a bush, a species Rebecca had only recently seen coming to her UV light late at night.

For butterflies, we’d see a few of our usual Reakirt’s Blue,

but also see several Rita Blue, a species we’ve only seen there and at Cerrillos Hills State Park. 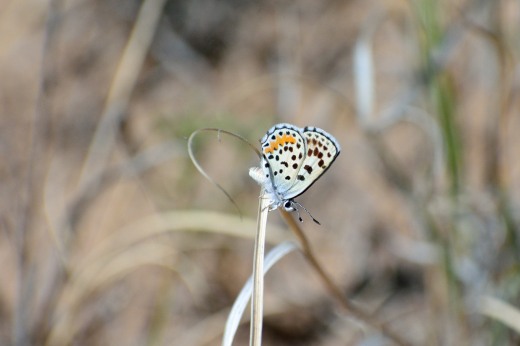 Another good butterfly to see was one we don’t see very often at all but had been hoping for since we’d had it on the Sevilleta count last year, the Palmer’s Metalmark.

While busy looking hard for butterflies to add to our count list, we saw several other cool critters, such as this Jumping Spider eyeing me warily,

and this tiny Crab Spider, who’d managed to snag a bee.

Always a highlight for me on visits to Sevilleta is spotting all the Walking Stick insects hiding in the Broom Dalea – it may take looking carefully a few times before spotting one as they’re quite good at camouflage, but once you spot one you’ll soon notice several others usually in the same bush. 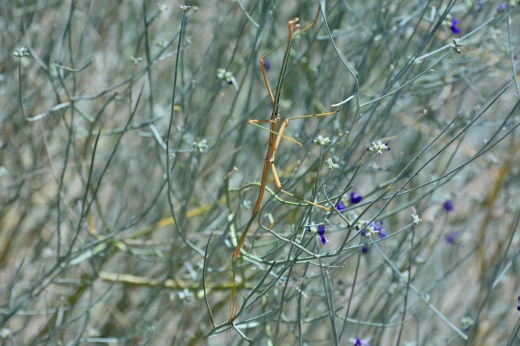 Other people may be able to see Praying Mantis insects here in town, but Sevilleta is about the only place in the state that I’ve ever seen one (and usually quite a few when I do). These guys tend to hang out in the Broom Dalea or clinging to stucco walls. 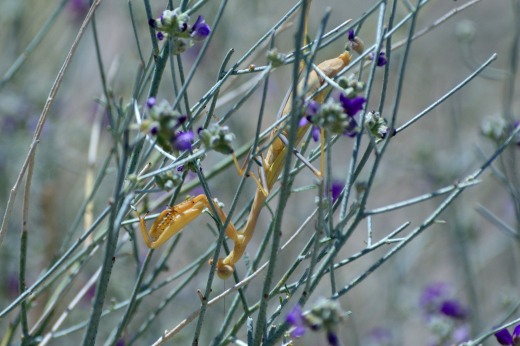 9 Responses to Not Just Birds and Butterflies