Posted on February 5, 2019 by joeschelling

Just like the quantum mechanical paradox posed by Schrödinger’s cat, I’m beginning to think a similar situation applies to owls.  Whenever I’m out looking for them, they can either be there or not and we’ll at least know if they’re there if we actually see them. If we don’t, they might or might not be there. Several times in the last few weeks, I’ve wandered around spots where either I’ve seen them in the past or had seen recent reports on eBird without managing to see any. But then in a few other spots have been fortunate to get a look.

My last posting had a photograph of one I’d lucked into seeing in the area at Pueblo Montano where they’d nested last year. Returning about two weeks later after seeing eBird reports of more than one owl there, it was cool seeing a pair out in the open albeit in a tree somewhat farther away than the first time. (They’d be in the exact same spot a few days later, so we’re hoping to show them to the group on this week’s Audubon Thursday Birder trip.)

The same day, I decided to take another look around the Albuquerque Academy. I’d looked there a number of times over the last month or two after seeing regular eBird reports of at least one being seen; a photo in one of the most recent reports gave me the idea to check a particular location where they’d roosted in previous winters, and following my Schrödinger’s Owl hypothesis decided to give it a really good look. It took some pretty serious scrutiny from a number of angles, but (yay!) I finally spotted one deep in the Ponderosa pine. 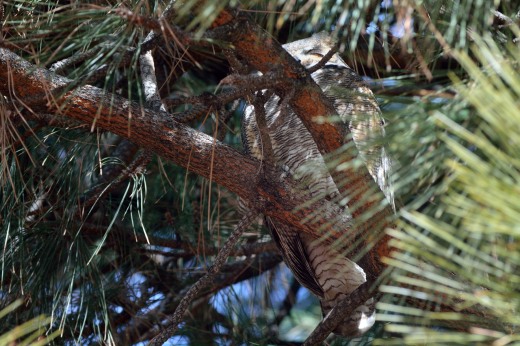 Yesterday, on a walk in the Rio Grande Nature Center bosque I started walking along the bike path to an area where we’d had nesting Great Horned Owls late in the season in 2016 and where I’d once seen a hidden Western Screech-Owl also in 2016. As I approached, a woman walking her dog asked if I’d seen the owls yet (guess my bins and camera gave her a clue what I was up to). When I said I hadn’t, she laughed and said “Well, any day now!”.  Too fun about five minutes later when she’d continued far down the bike path that this one just popped out at me, close to eye level and near the path. 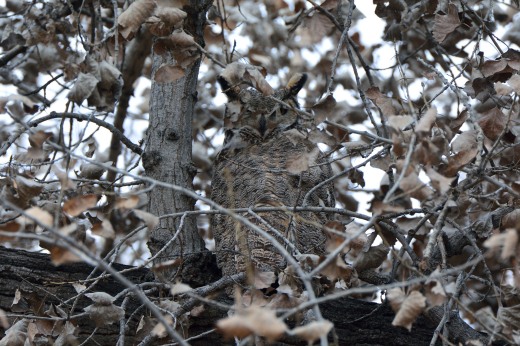 This morning, I started out looking around Willow Creek Open Space where an eBird report from a couple days ago included a photo of an owl in what could’ve been the tree the male hung out during the 2017 nesting season. Never found a nest or saw the owls there last year, but seemed worth a look. This time, I was unsuccessful and will have to return when the weather improves for a closer look. Since it was on the way home, I stopped in on the Corrales location thinking maybe I’d get a better picture of them more out in the open than on my earlier visits. Strolling down the irrigation ditch, one immediately popped out against the sky high in a little different tree than I’d seen them before.

I kept walking along looking to see if I could spot the other one that’s been nearby on my last several visits. When that didn’t work, I came back and bushwhacked around the tree to see if I could be a little better view – oh yeah! 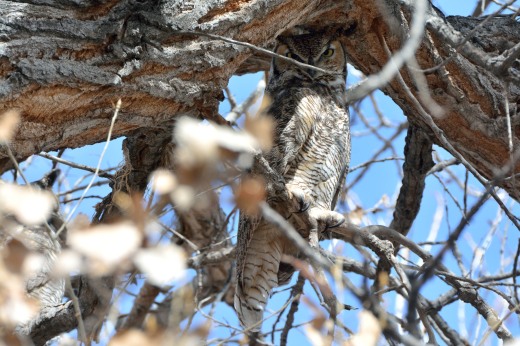 But then it struck me as I was walking away back toward my car that I didn’t remember that huge branch above the one in this second picture being there in the first picture. Wondering what was up with that, I turned around and looked a little closer…if you look close on the left side of either of those two pictures, you’ll see there’s two owls there. In the first picture, one is almost completely camouflaged by the tree trunk with only his eyes giving him away, and in the second, she’s effectively blocked by a few dead leaves.

Crossing over the main ditch to the east and looking back from a good distance away, it was a little easier to see those silhouettes. 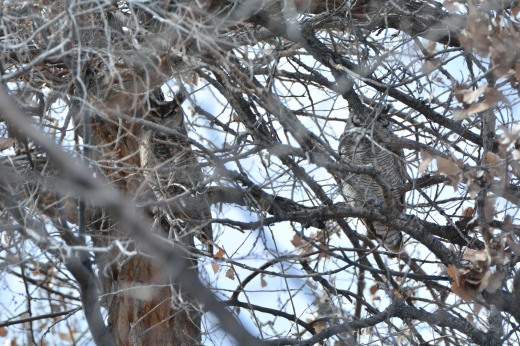 A few other pictures from the last couple of weeks include a Brown Creeper trying to distract me from the two Corrales owls, 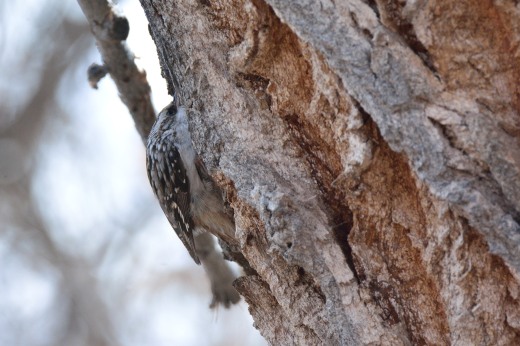 one of the Western Bluebirds (of which there were quite a few in Corrales),

and a Cedar Waxwing from along the Rio Grande near the Nature Center yesterday.

I’d actually been walking along the river there looking (unsuccessfully) for the Bald Eagles that roost there this time of year, but where I’d also stumbled across a flock of waxwings last year, again busy feeding on the low New Mexico Olives and going to the water.

Our Audubon Thursday Birders had gone to Valle de Oro NWR on January 24 and had some good birds despite the rather blustery weather and quite large group. We would spot a few Bald Eagles that morning

but have a heck of a time getting on a Greater White-fronted Goose in a flock of Canada Geese. Rebecca and I returned a few days later hoping (unsuccessfully) to see the Brant that had been reported there, but got much better looks at several of those geese.

On a visit to Tingley Ponds a couple weeks ago, it was fun to see a female Bufflehead at fairly close range, 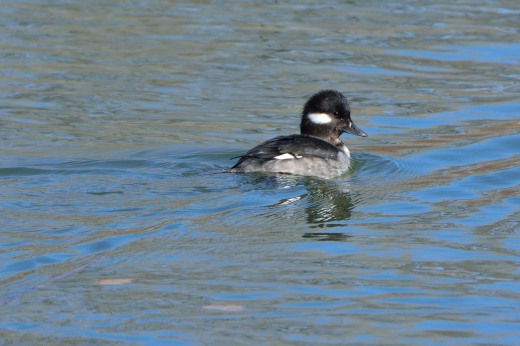 and to come across this Great Blue Heron perched right above the trail around one of the ponds.