Every year since 1972, the skies above Albuquerque fill with hot air balloons most mornings for nine days in early October. The Albuquerque International Balloon Fiesta brings nearly 600 balloons from all over the world to town for our biggest event of the year along with huge numbers of visitors who come to see the show. Hundreds of these balloons float above town each morning, drifting about depending on which way the breezes blow.  Quite the sight and the subject of innumerable photographs over the years, it also seems to be the time of year that the weather switches seasons with the arrival of the first serious cold front, bringing with it cooler temperatures (appreciated for the increased lift for the balloons), and a bit of precipitation and a couple of windy days (not so appreciated if flights are cancelled). This seasonal weather change also brings a few changes to what I see out looking around for birds, butterflies, and other nature subjects.

A visit to Tingley Ponds almost two weeks ago was quite entertaining as two Belted Kingfishers squabbled over territory. Both females I’m pretty sure, one would sit in a tree calling continuously until the other would swoop in and chase it off; they’d then head to their respective corners and go again. It got to where I could almost predict where they would fly, usually around the north pond and sometimes off toward the south pond before returning, and I enjoyed watching the show for at least 20 minutes. Of several pictures I took, this is the one I thought came out best.

Since then, I’ve also checked out my ‘local patch’, Embudito, a number of times seeing some good butterflies now that things have picked up a little with various plants in bloom and the chamisa coming into its full autumn color. A butterfly we’ve seen a few times this year in different locations but that isn’t seen at all in other years is the American Snout, a rather unusual looking species.

More typical this time of year are some of the sulphurs – Clouded Sulfur (in unbelievable numbers anywhere alfalfa grows), the very similar Orange Sulphur (a mating pair shown below),

Lately, I’ve also seen a few of the Painted lady butterflies that got everybody’s attention last year as they were seen in very large numbers all over town, but strangely absent this year. There also has been at least one Variegated Fritillary on almost every visit.

At Bosque del Apache NWR on another day, a Queen posed nicely for me on the chamisa in full bloom.

There have been a few other notable sightings in Embudito recently, too. Among these is the gorgeous Sacred  Datura, with blooms that open early in the morning and evening but close up in the heat of the day. Some (I think maybe freshly blooming ones) take on a classy purplish tint that eventually fades.

Always a few dragonflies working the canyon, too, that usually turn out to be Variegated Meadowhawks.

Embudito is an excellent birding location for this high desert habitat of the foothills; it was fun getting this picture of a young (I’m guessing) Say’s Phoebe sitting high on a cholla.

Another nice odonate (damselflies and dragonflies) seen last week at Alameda Open Space was this female American Rubyspot, a species I usually see about this time of year along the Rio Grande. 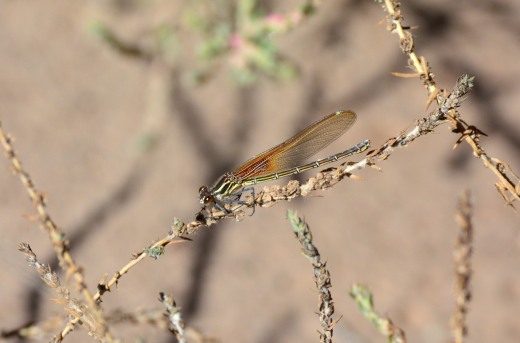 Last week’s Audubon Thursday Birder trip to Bosque del Apache NWR was quite a success and much more productive than we had expected. CNMAS held their monthly field trip there the previous weekend. That field trip group found little water present at the refuge, which limited the number of waterfowl species seen and they ended up with a respectable, but rather low number of only 26 species. With an unusually small number of 11 Thursday Birders, we were almost certain to exceed our success criterion of more birds than people and delighted with our total of 40 species by the end of the trip.  Of those 40, there were a few really good ones and some that allowed me decent photographs. One that we’d see in Luis Lopez along the way to the refuge was pretty far away for a photograph but unusual enough for us to see was a Vermilion Flycatcher, which almost made up for our not seeing the Phainopepla we’d expected to see in that area. 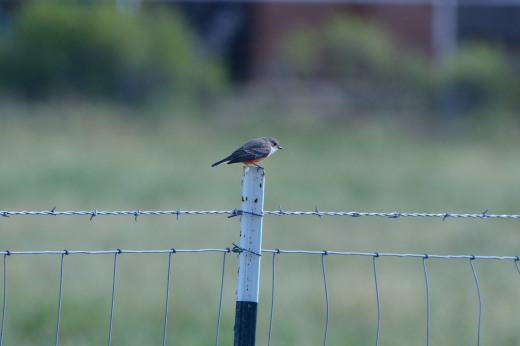 One of my favorites that we usually see there but never at home is one someday I hope to photograph completely in the open, a Pyrrhuloxia; this female let me get pretty close but is still a bit tucked into the weeds. 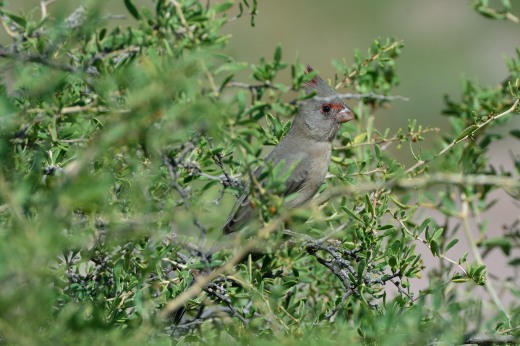 While wandering around outside the Visitor Center, several members of our group kept getting good looks at a kingbird in the low trees near the parking lot. Earlier in the day, we’d seen a Western Kingbird a little late in the year for them and the our other common kingbird, Cassin’s Kingbird. This one, however, was obviously a different species. 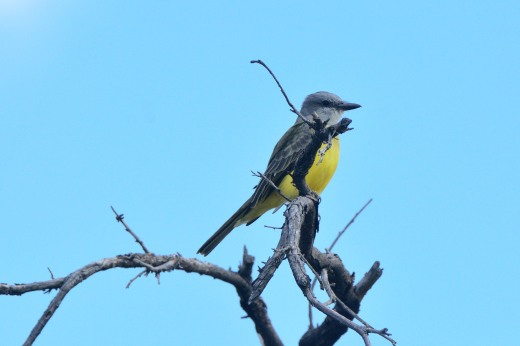 It was either a Tropical Kingbird or Couch’s Kingbird, either of which is rarely seen in New Mexico and, as we discovered later, distinguishable mainly by sound. One of our group submitted the picture and description to eBird later that day, a rare enough sighting that a number of local experts ran down over the next few days to determine from audio recordings that it was indeed a Couch’s Kingbird. eBird shows one had been seen at Bosque del Apache NWR back in November 2016; eBird only shows a couple of reports for Tropical Kingbird near Carlsbad NM earlier this year and from Santa Teresa NM (outskirts of El Paso TX) from 2010. Now that’s what I call a Bird of the Day!

Another good one at the Boardwalk Lagoon, about the only spot on the refuge that day with plenty of water were the American Avocet, the first time I’d seen them in their winter plumage and at closer range than I usually see them.

9 Responses to Beyond Balloons