Not So Creepy Crawlers

Posted on September 19, 2018 by joeschelling

Since my last post, in addition to the usual birds and butterflies I’ve been seeing a few other cool-looking critters including caterpillars, some special insects, and several lizards. Thinking of a title for each blog post is always the toughest part for me and a necessary first step before adding text and pictures.  So the title of this one refers to these unusual sightings.Not all that easy coming up with the text part, either, but fun to describe and keep a record of what I’m seeing out there and to put some of those photos in context.

Those lizards include this Eastern Collared Lizard seen on a visit to the Abo ruins with Rebecca last Saturday, 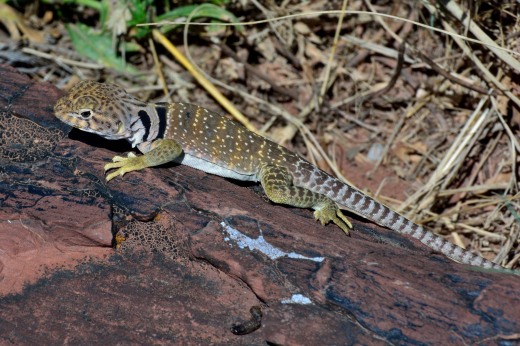 and another lizard I haven’t yet tried to identify seen earlier that day at Sevilleta NWR. 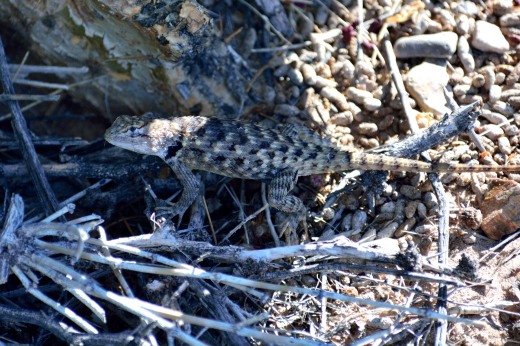 We’d been to Sevilleta NWR a week earlier when Rebecca happened to notice this colorful Greater Earless Lizard from the car as we were entering the refuge.

Although this next one is quite commonly seen all around town, it’s only been recently that I found out it’s our New Mexico State Reptile. News to me, too, is that they’re all female – reproducing through a process termed “parthenogenesis” and are essentially all clones. 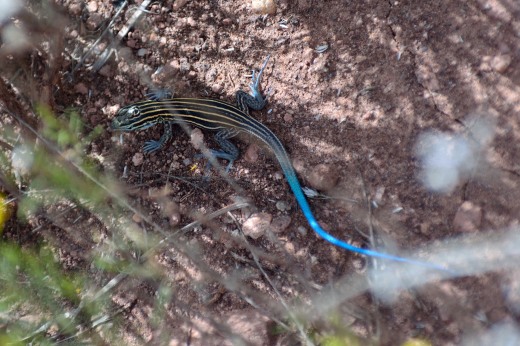 Last but not least, while looking around for butterflies at Oak Flats was my first Short-horned Lizard (probably Phrynosoma hernandesi) for the year. 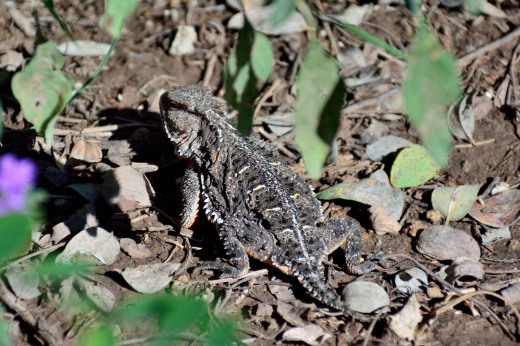 Having had a great time at Sevilleta NWR at the end of August helping with their annual Butterfly Count, we headed down there again two weeks later for their most interesting “Moth Night and Friends!” event. After a short presentation on insect identification, we headed outside late in the afternoon spotting a good variety of interesting insects before waiting for sunset to see some good moths attracted to UV lights set up on the Visitor Center patio. Among the insects was this robber fly who’d captured a bee, 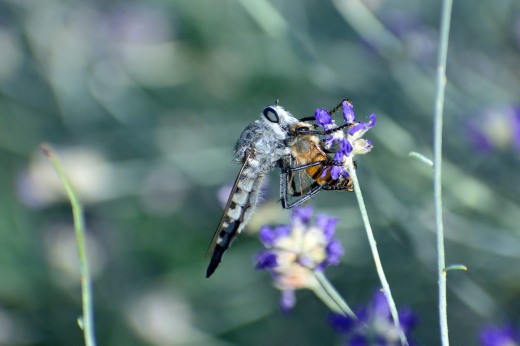 and a large number of spreadwing damselflies. 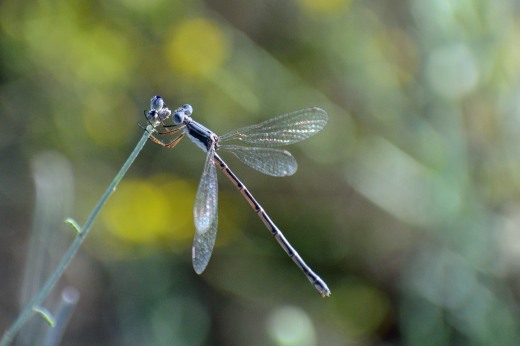 Very cool, however, was seeing a couple of mantises (and managing not to get any good pictures of them) and a crazy number of walking stick insects, neither of which I’d ever seen in New Mexico before. On that and a subsequent visit, we’d spot a couple hiding in the broom dalea 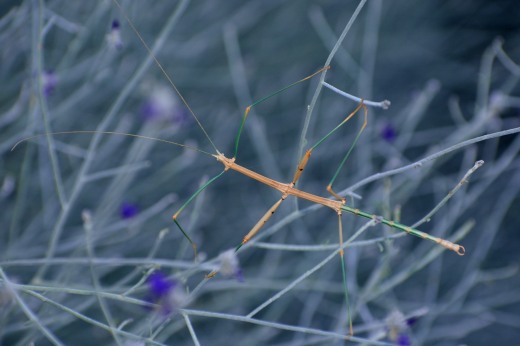 and others clinging to the stucco walls of the Visitor Center. 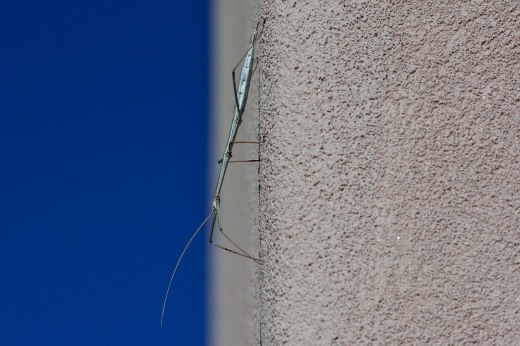 Since then, I’ve been checking the broom dalea that’s in bloom around town now but haven’t yet found any walking sticks on it. Interesting, too, has been how colorful the desert is these days. Since the summer monsoon rains hit, wildflowers have popped out, several types of ground cover have appeared out of bare soil, and the other grasses, bushes, and cacti are looking much healthier. One wildflower I’d never noticed before is Devil’s Claw with that gorgeous flower and unusually broad leaves and thick stems compared to other more typical desert species. 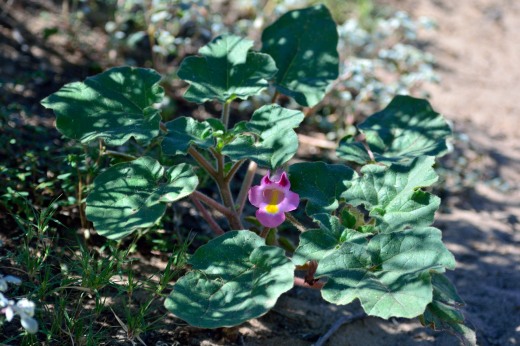 The first Audubon Thursday Birder outing for September was a nice morning visit to Alameda Open Space. One of the first birds seen was a young Swainson’s Hawk, whose identity fooled us at first with some thinking it might be a young Red-tailed Hawk. 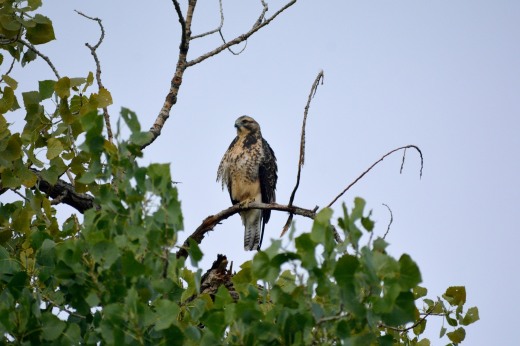 We’d later see Wood Ducks in their eclipse plumage where the males in particular lose their colorful breeding plumage after breeding, something I’d never noticed before. 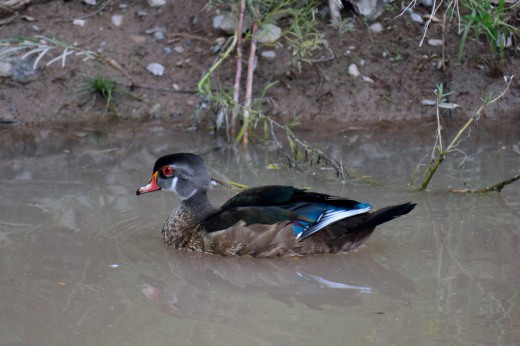 That day, Rebecca also would draw everybody’s attention to a Viceroy butterfly (a species we don’t see around here very often) she’d spotted near the trail. 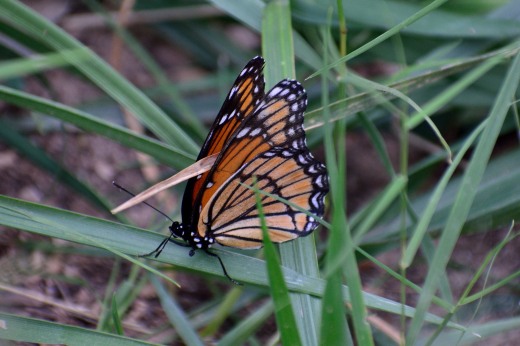 On a butterfly trip a few days later, we drove by the Estancia Playa and huge new El Cabo windfarm that I’d first seen earlier last month. Every time I’ve been near Estancia or seen it from an airplane, I’ve wanted to get a closer look at that playa. 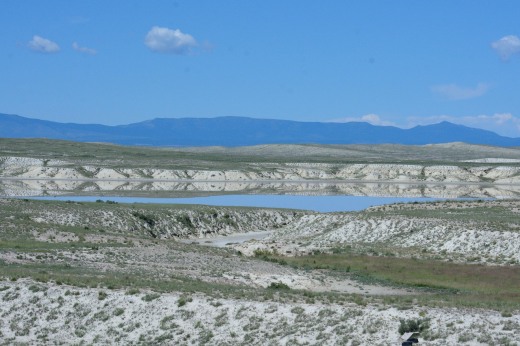 Pretty impressive with that bit of standing water, this area of dry lake beds extends north for almost 18 miles. Unfortunately, seems to be on private ranch land so it’s not really accessible on foot. Later that morning just west of Willard NM, we stopped along the highway to look for butterflies and were surprised to spot an Uncas Skipper, a species we’d only seen a couple of times before and never close to Albuquerque. 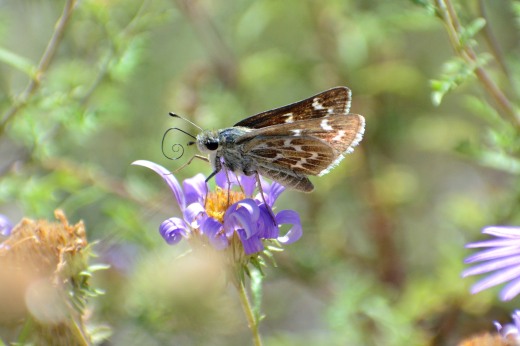 Last week’s Audubon Thursday Birder trip was once again a nice visit to Whitfield Wildlife Conservation Area and the Belen Marsh with a good range of birds including a flyover of a large flock of White-faced Ibis. Seen when the birds were busy hiding in the brush were a few cool looking caterpillars (that Rebecca was later able to identify as Clouded Crimson Moth), 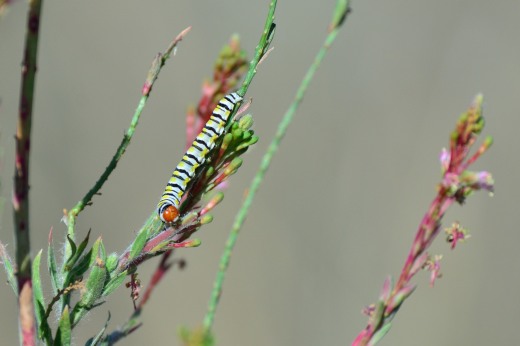 several butterflies including this tiny Dotted Roadside-Skipper, which we also don’t see very often at all, 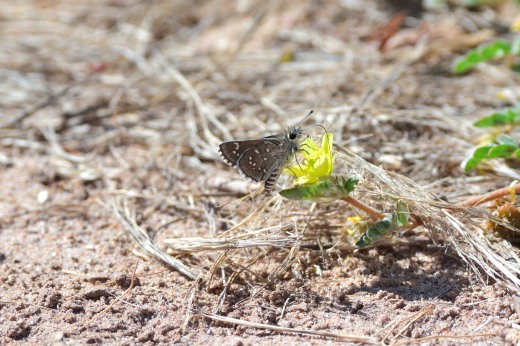 and a couple of Monarch butterflies including this one posed rather dramatically on a sunflower. 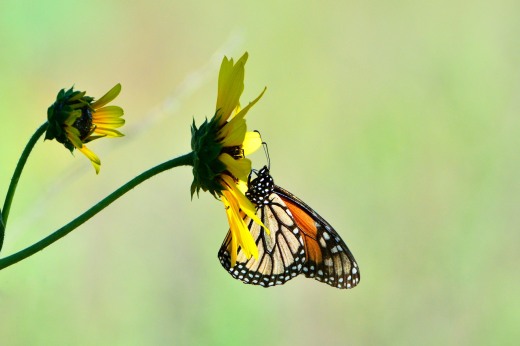 Finally, I’ve been seeing roadrunners out and about pretty regularly the last few weeks, this one especially friendly following me around for a few minutes and posing nicely for a portrait. 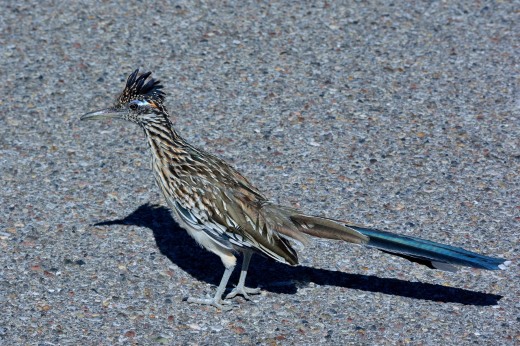 4 Responses to Not So Creepy Crawlers