It’s been a little more than a week since returning from a fabulous almost two-week European butterfly trip, mostly in the Swiss Alps with a couple of days in England coming and going, and thought I’d post some of the stories and pictures here. 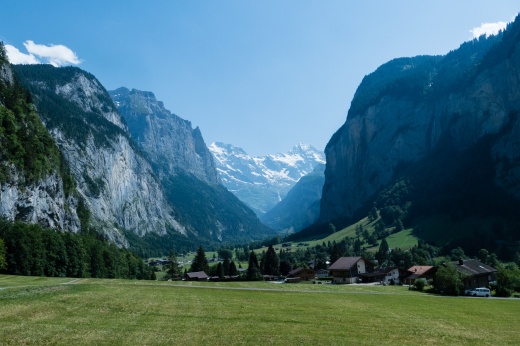 Rebecca and I first flew to London-Heathrow by way of Denver. I’m usually bothered by jet lag flying east, but it turned out not to be at all a problem this time for either of us. The secret (as I’ve learned from other trips) is to grab some sleep on the plane and then stay up until evening at the destination. It just got too easy this trip when we decided to upgrade to those lie-flat business class seats for the 9-hour flight, took advantage of the fabulous shower facility at the arrival lounge at Heathrow included in that ticket, and were able to check in to our hotel hours before the normal check-in time. We’d gotten tickets on the Heathrow Express train online for the 15-minute ride to Paddington Station and got to the Best Western Delmere Hotel after a short, easy walk. Hyde Park was only about a 10-minute walk from the hotel, so we stayed awake that afternoon looking for butterflies and birds in the rather large park. Before the trip, the UK Butterfly Conservation website showed a butterfly field trip scheduled for the next day at Stanmore Country Park. The park was only  a short walk from the Stanmore Station at the end of the Jubilee line of the London Underground (Tube), which we took the next morning from Paddington. A delightful walk that morning led by John Hollingdale, voluntary park warden, with a small group of local nature lovers and getting to see a good mix of the birds and butterflies, most of which were new to us (and certainly helpful having them around to identify them). One of the butterflies that morning that posed nicely for me was the Marbled White (actually a brushfoot), which we would also see occasionally later in the trip. 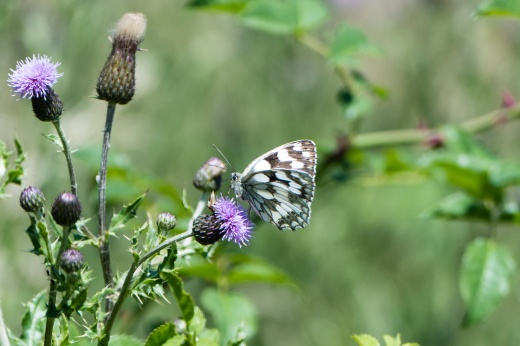 The next morning, we checked out and took the quick trip back to Heathrow to meet our Naturetrek tour group for a flight to Zurich and then a series of three trains to our destination for the week, the Hotel Berghaus in Wengen. 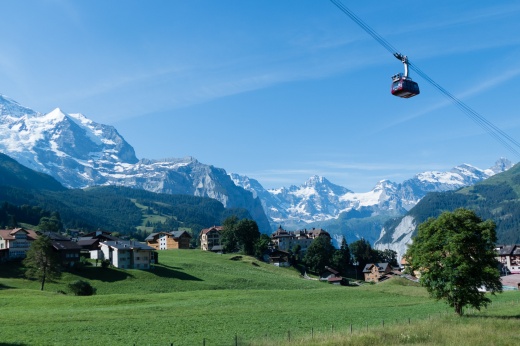 In one of the few hiccups on the trip, as Americans Rebecca and I had to spend almost an hour in the long Swiss customs line in Zurich, while the Brits got to breeze right through the EU line. We finally got through and barely had time to apologize to the group before we all ran for our first train scheduled to leave minutes later. I hadn’t even thought of the customs bit when planning our trip, so we ended up going through British customs twice (on arrival from Denver and then again returning from Zurich) as well as our time with Swiss customs.

The small town of Wengen lies in the shadow of the some of the more dramatic Alps, the Eiger, Mönch, and Jungfrau, and is reached by a cogwheel train from Lauterbrunnen. With very few vehicles allowed in town, it is wonderfully quiet with mostly only the sounds of birds and twice a day the sound of cowbells as a small group of dairy cows are herded to and from their mountain pasture. Cowbells are a big deal there, as shown by this display on a barn in nearby Gimmelwald. 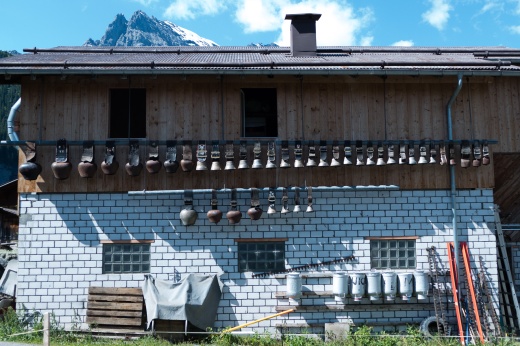 Hotel Berghaus was quite enjoyable, with most rooms (including ours) having balconies facing that majestic view of the mountains. The owners and staff were quite friendly and made us feel right at home from the moment we arrived. We’d start each day meeting for a breakfast of several alpine cheeses, freshly-made breads, homemade jams, soft or hard-boiled eggs, excellent coffee, and a few other things. Late in the day, we’d return for leisurely and tasty dinners usually served outside on the comfortable patio with views of the late afternoon light on those mountains. Cheese and chocolate seemed to play a large part in out diet that week and was all delicious.

After breakfast, several people would head to town with Jon Stokes, our leader, to pick up supplies for lunch, which we would then divvy up among the group for wherever we ended up going that day. Jon’s first job each day was to check the weather and decide where we’d go to look for butterflies, and next do an amazing job of working the logistics for the day – finding the best combination of train, funicular, cable car, bus, and walks to get us all there and back in a most efficient manner and always having a backup plan if the weather changed on us or we might miss a connection. We each had a 6-day Jungfrau Travel Pass that let us easily take any mode of transportation in the area. Public transportation in Europe, and especially in Switzerland, has always been impressively efficient and convenient in my opinion, but it certainly takes skill to coordinate moving a good-sized group of people (17 in our case) among multiple modes of transport. Jon is quite an expert not only on butterflies, but also quite knowledgeable on the plants, birds, and most other aspects of nature we’d see during the trip, and having grown up spending summers nearby was quite familiar with the area and options for getting around.

Prior to the trip, weather forecasts were predicting clouds and rain for most of our time there, leading me not to expect to see many butterflies at all and wondering a bit about what our backup plan might be. It came as somewhat of a surprise, therefore, finding quite good weather for most of each day, with Jon picking destinations in different valleys to maximize our chances for finding butterflies.  The one day when it did look overcast all day we hopped the train to Interlaken for a ferry across the Brienzersee and a nice hike along the shoreline.

Our first morning we took the cable car from close to the hotel in Wengen to Männlichen for incredible views of the Jungfrau and far below the valleys leading to Mürren and Grindelwald. 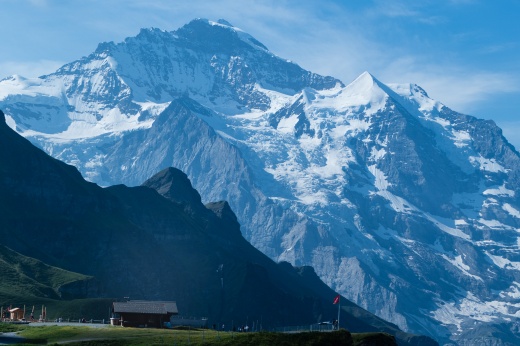 The alpine scenery was considerably more dramatic than I remembered. Gorgeous wildflowers covered the meadows at that elevation of about 7300′ (2225m), with glaciers and snow-covered peaks at higher elevations (Jungfrau tops out at 13642′ (4158m). Naturally, I ended up photographing quite a few of those flowers including one of my favorites, the Alpine Forget-me-not. 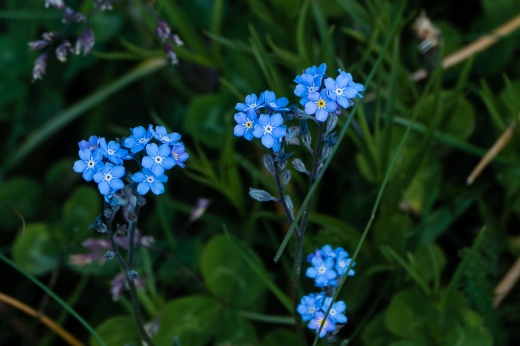 Another stunning wildflower we’d see in alpine habitats is the Common Spotted-orchid. 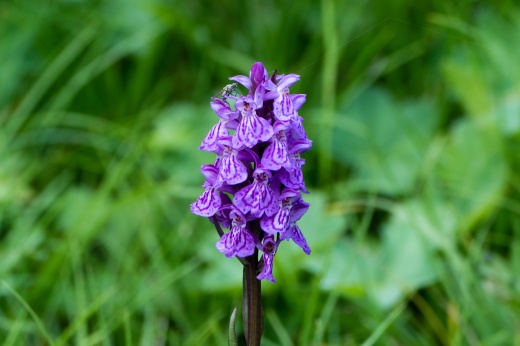 Seen regularly on the trip (in both England and Switzerland) was the Small Tortoiseshell, 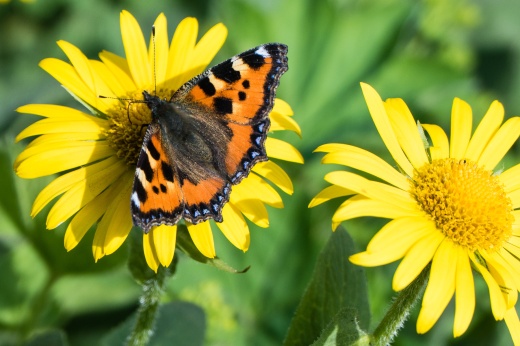 but we’d also see a nice number of species probably found only in alpine habitats, such as the Alpine Grayling. 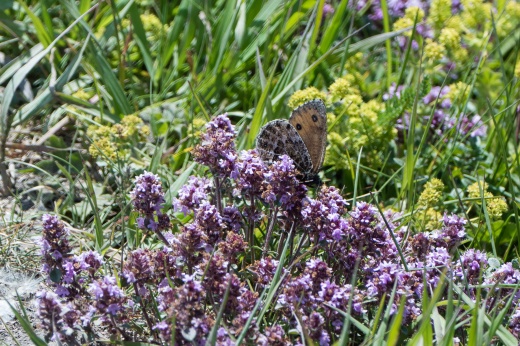 After spending a couple of hours working the meadows near the cable car station, we started on the mostly downhill hike toward Kleine Scheidegg, breaking for lunch about halfway and adding lots of flowers, birds, and butterflies to our trip list. 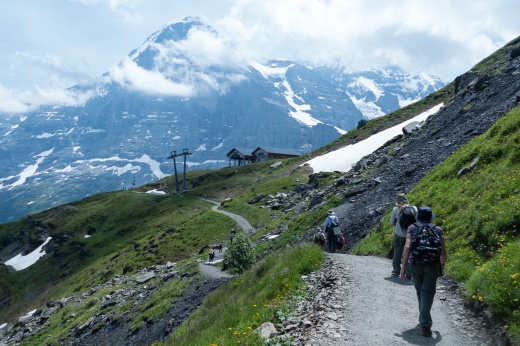 A nice butterfly to see along the way was the Eros Blue at a damp spot that drew several similar species. 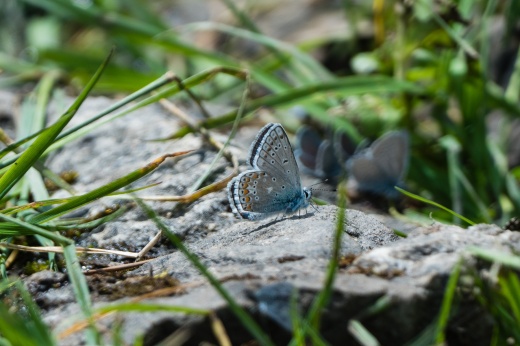 A bit of late afternoon rain that day hurried us on to Kleine Scheidegg where we’d catch the cogwheel train back to Wengen.

On several days, we’d generally find our way by various means to Grindelwald in the next valley over and then to different locations above town including Grosse Scheidegg. A few of the butterflies seen there include the Sudetan Ringlet, 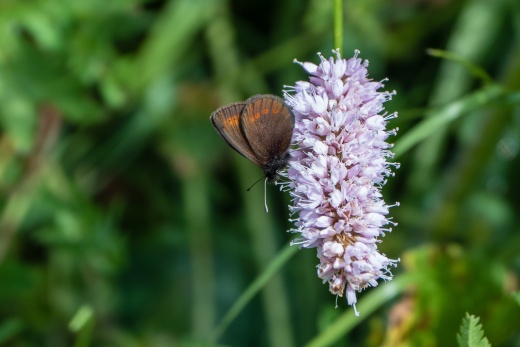 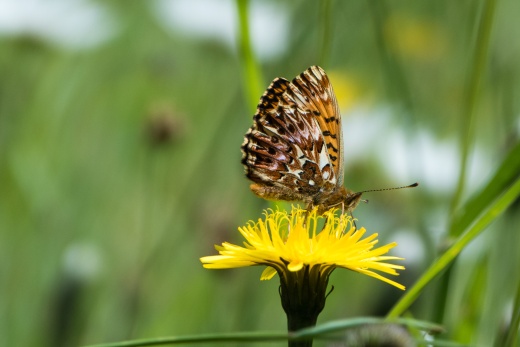 and of False Heath Fritillary. 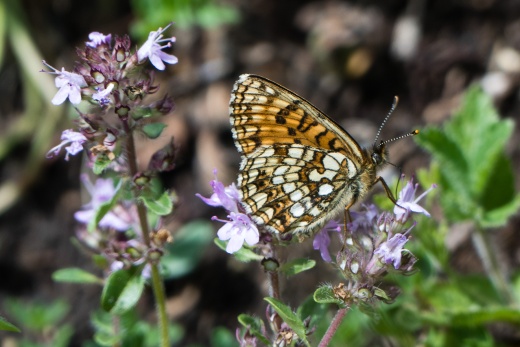 Here’s what they look like from the top in a photo taken the next day. 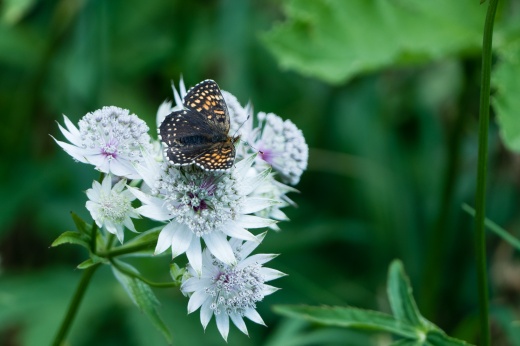 There were also quite a few Alpine Heath butterflies to be seen anywhere in those alpine wildflower meadows. 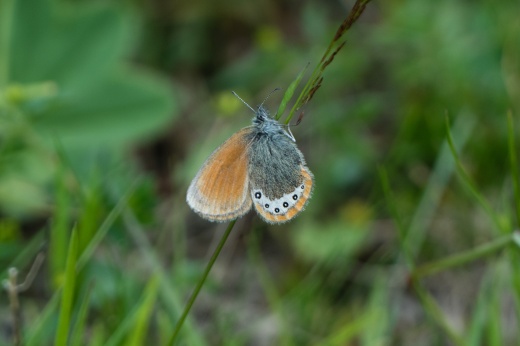 Another fritillary from that area is the Pearl-bordered Fritillary, easiest identified in my opinion by the underside pattern. 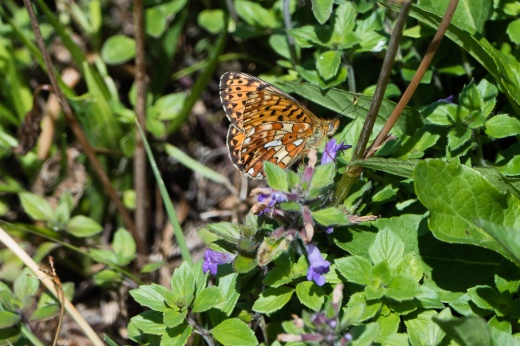 My favorite day was taking a cable car up to the small village of Gimmelwald high on a cliff on the opposite side of Lauterbrunnen Valley from Wengen. 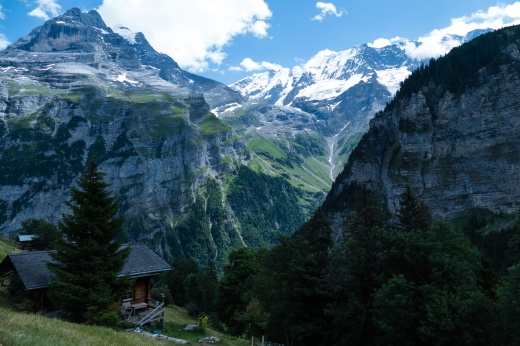 It’s a very quiet town with a few interesting shops and cafes and just a short distance away was a spot where we had our picnic lunch after seeing lots of different butterflies. One of the first we’d see, nectaring on flowers in the town, was the Apollo, one I’d been hoping to see and that we would later find in several other locations. 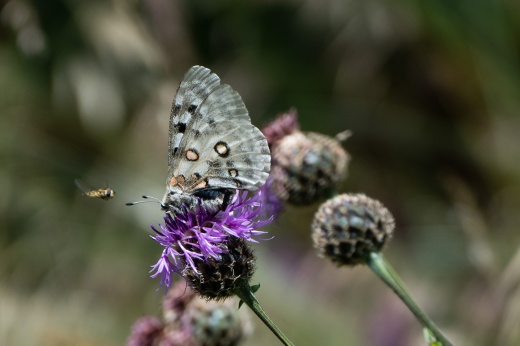 Another butterfly I’d see for the first time that day is the actually rather common, but quite good looking, Large Wall Brown, both from the top view 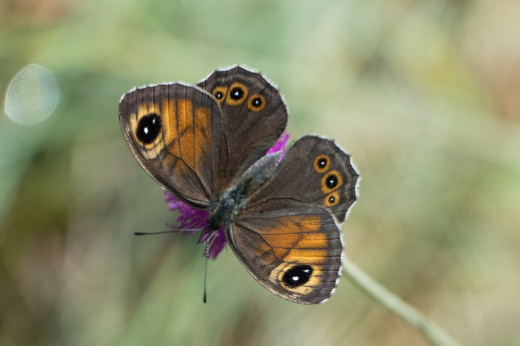 Another butterfly that seemed pretty special was the Arran Brown with its distinctive white streak on the underside. 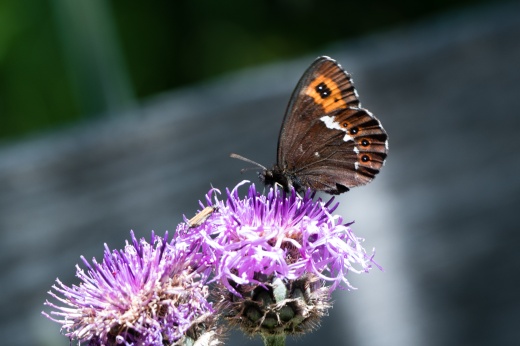 Quite similar looking from the top and seen on a visit our last day to a meadow just above our hotel is the Scotch Argus. 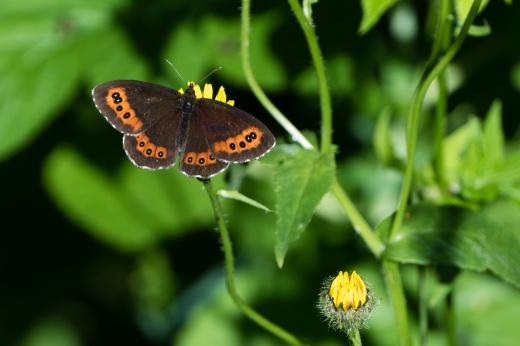 At our picnic spot that day were some nice, big fritillaries including the Silver-washed Fritillary 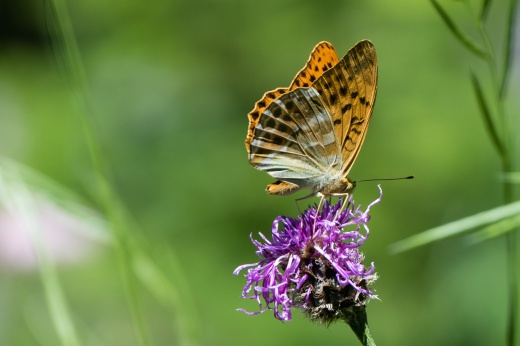 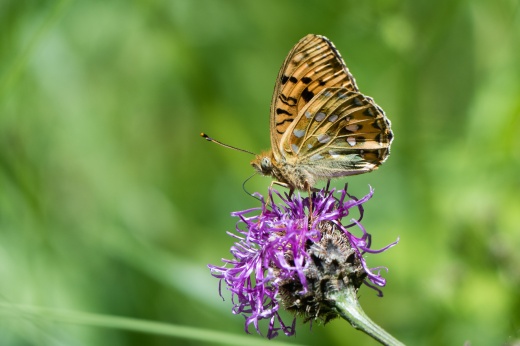 In the shadow of some trees nearby, Rebecca pointed out a few of the Martagon Lily that were in bloom. 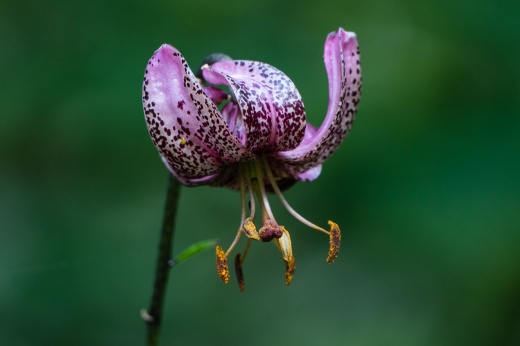 One of the very last butterflies we’d see in Switzerland was a hairstreak we may also have seen back in England on our first full day butterflying at Stanmore Country Park, the White-letter Hairstreak. 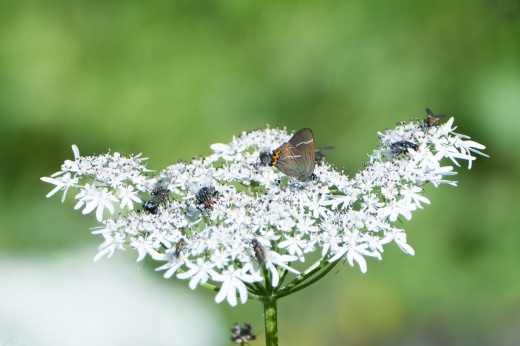 All in all, the group would tally nearly 100 species, an excellent total for the area of which I photographed about half. More of my photos from the trip are online at my website at http://sandianet.com/swiss/index.htm .  After a full, fabulous week in Switzerland, we headed back for home, reversing the order of the three trains it took to get there, having a minor flight delay out of Zurich, and arriving back at London-Heathrow in early evening. Rebecca and I stayed at the Heathrow Terminal 4 Hilton and left right on time the next morning for Houston and a connecting flight to Albuquerque. Unfortunately, we arrived in Houston to find our next flight cancelled for aircraft maintenance issues, but after scrambling around a bit United booked us home on a flight the next day after putting us up in a hotel and giving us vouchers for food. Not exactly fun, and it’s interesting the small items you miss from your checked luggage, but may actually have eased the jetlag transition once back home.