So Much For Winter

Spring in the northern hemisphere begins with the equinox this morning after a most unusual winter here. While the east coast seems to have gotten a number of winter snowstorms one after the other, we’ve missed out on much precipitation at all and have had long stretches of unusually warm weather. But so far March has otherwise been fairly typical with calm sunny days interspersed with a few windy, cloudy, and chillier days.

A highlight for me of our Audubon Thursday Birder walk on March 8 was spotting another Great Horned Owl as our rather large group walked along the irrigation ditch in Corrales near Dixon Road. Fairly high in a tree right next to the path, most of the group had passed right by it sitting out in the open when I picked out those distinctive ear tufts against the blue sky. As usual, its camouflage was just about a perfect match to the tree bark and it could easily be mistaken for just another branch. And as usually seems to be the case, it pretended to be invisible despite all those humans down below looking at it and taking its picture. Assuming it was a male, a few of us looked around in vain for a nesting female. I went back on Saturday by myself, first to see if the male was still around and second to look around more carefully for a nest. Still no luck nest-wise, but felt lucky to spot the owl again in a different tree close to where we’d seen him before and this time almost at eye level.

That morning, I also checked in with my pair at Piedras Marcadas Dam. The week before, they’d both been on the same branch close to last year’s nest but hadn’t yet started nesting for this year. Despite all the construction equipment being used to remove sediment from the base of the dam, the owls had again taken up residence and are busy incubating some eggs. You might want to zoom in by clicking on the picture below, but you can see the female sitting on the nest there on the right side just above the center of the page and if you look carefully can spot the male about the same distance from the left side in that clump of dead leaves. 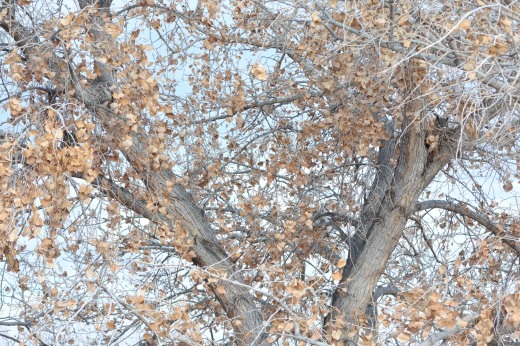 Several times over the past week, I’ve wandered around Embudito Canyon hoping for a few more butterfly species to start appearing. A small number of Sandia Hairstreaks have been seen each time, and one or two individuals of a couple of other species, but I’m still waiting to spot the Southwestern Orangetips that should be flying by now. This has been a good year all over town for Mourning Cloaks, which overwinter as adults and thus appear whenever it’s warm enough.

The willows have started budding out deep in the canyon, which can attract butterflies, moths, and other insects, so I’ll definitely drop by later this week when the weather should be sufficiently warm and sunny for a few more butterflies to start flying. While looking earlier this week, it was fun to have a Ruby-crowned Kinglet pop up right in front of me while it was busy working the willows for some of those insect snacks.

According to my reference sources, once those Great Horned Owls start actively nesting the average incubation period is 33 days. Since the pair near the Rio Grande Nature Center has been seen nesting since February 12, the little ones are sure to hatch any day now.  I took a look last Saturday (March 17) but didn’t see any little ones or the impression that the female had changed position (females will often sit up a little higher once her eggs have hatched).  It was interesting the male was in pretty much the exact same spot as the last time I’d been by two weeks earlier. 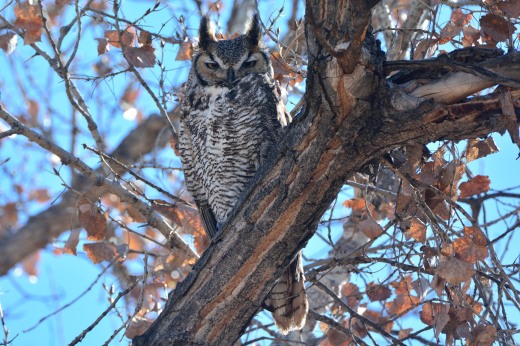 It of course was a treat to find one of the Western Screech-Owls catching some sun in one of the nest boxes at Los Poblanos Open Space on last week’s Audubon Thursday Birders trip, but I’d also heard the one in a natural cavity in Columbus Park was still being seen (most odd – I’d first seen it there almost two months ago!) so I stopped there on the way to the Nature Center two days later.  And, sure enough, there it was quietly soaking up some sun.

It had been a couple of weeks since I’d first spotted the nesting Great Horned Owl at Pueblo Montano Open Space, so I also stopped by there. The female was still on the nest, but I still haven’t managed to spot her mate who I assume is somewhere close by – this year for some reason the males have often been in the same tree as the nest, but usually they’re some distance away in a well-hidden spot. A Black Phoebe posed nicely for me at quite close range that day, 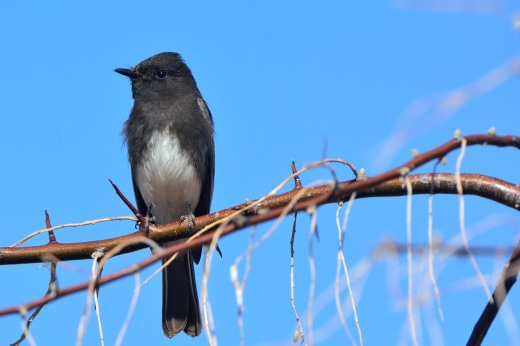 and a pair of Cooper’s Hawks were making quite a commotion near where the owl was nesting.  One finally flew off leaving the other posing in the sun for me. 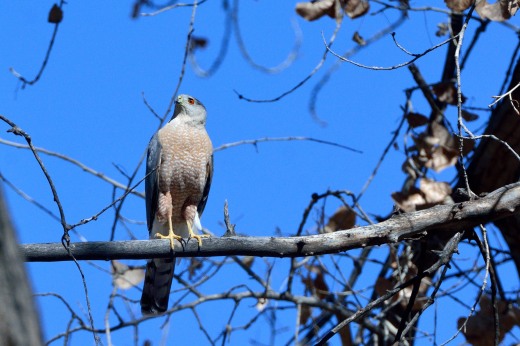 The Cooper’s Hawks also start nesting about now and I’ll have to start looking for them again soon, and no doubt will start seeing a few baby Great Horned Owls in the next week or so. Them butterflies ought to start popping up again, too, now that Spring is here and we’ll be seeing some warmer days.

4 Responses to So Much For Winter