The weather’s been just about perfect lately, bringing a number of fun sightings and new butterflies for the year. It has been getting a little warm in the afternoons as we’re closing in on summer and hopefully our summer “monsoon” rains will kick in soon. The day before I had to leave town for a couple of days last week, my friend Kelly sent me an email telling me about a Ferruginous Hawk nest she’d found near Stanley NM, way out in the plains east of Albuquerque. Figuring they’d likely fledge and maybe even disappear before I’d get another chance to get out there, I headed out there that morning. Kelly’d given me pretty explicit directions, but even knowing the large nest was in one of the few trees there, it was almost impossible to see anything from the side of the road. Sneaking around behind the tree, however, the nest was easily visible and I got a good look at the female and one of the two little ones at almost eye level before she flew off to distract me. 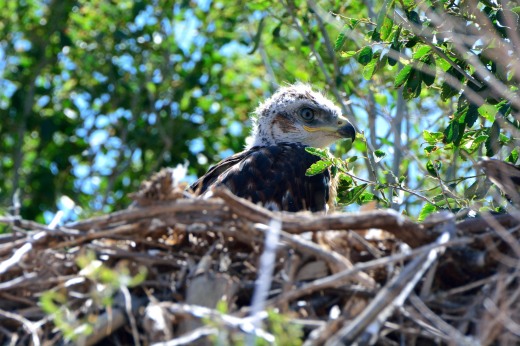 Almost immediately, Mom flew off to a nearby telephone pole for a couple of minutes before taking off and circling high above me for a bit before pretending to fly away.

Figuring I’d caused enough consternation there for one day, it was back in the car to head for home. There were any number of other hawks, Western Meadowlarks, Western Kingbirds, and Horned Larks along the way on any available perch,

and it was cool getting a nice look at a Swainson’s Hawk on another telephone pole not far from the nest location.

Flying to Dallas the next morning and back the next evening, I made it home in time for last week’s Audubon Thursday Birder trip to a friend’s cabin up in the Jemez Mountains. Our hosts volunteer for our group to come visit every year for what is always an enjoyable day and lots of good birds, some of which we rarely if ever see at home; this year’s visit included a couple of Evening Grosbeaks, several nesting Violet-green Swallows and Northern Flicker, and a good variety of other birds including a Hairy Woodpecker coming right to their suet feeder.

Rebecca and I also like this trip for two rather special butterflies that we only see in that higher altitude habitat. The first of these specialties I spotted was a Western Pine Elfin, which was the only one I’d see while Rebecca would see a couple of other individuals a little later.

Moments after seeing that one, a Purplish Copper popped up, and that afternoon we’d find several more of them in a field of wild iris and asters.

That weekend had us heading out to Las Huertas Canyon just east of Placitas, one of our better butterflying areas and unique in having a good year-round stream and more deciduous trees than we usually see in the mountains. Turned out to be a pretty good day, especially at a few of the muddy spots near the water in several locations. We usually first stop at a big meadow near the Sandia Man Cave, the only spot I know of with some tropical milkweed. The milkweed was just on the verge of blooming, but draws such a variety of butterflies when it does that I may need to visit again soon. Like everywhere else this year for some reason, there were plenty of Painted Lady butterflies, although their numbers seem to be have decreased in the last few days. 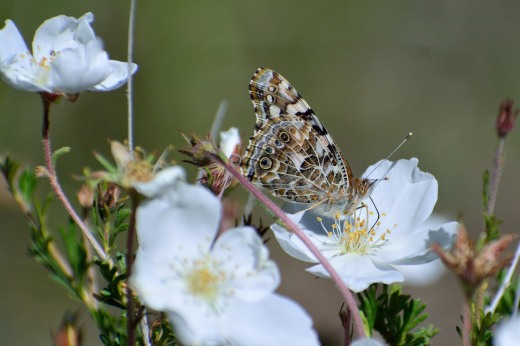 Not seeing too much at our first muddy spot by the creek, our hopes were rewarded at the next one with a large number of Swallowtails, a Red Admiral (I didn’t realize it was there until looking at my pictures later), Weidemeyer’s Admiral, Arizona Sister, Margined White, Russet Skipperling, and a few other species.

but also the deeper yellow of a single Two-tailed Swallowtail were there busy lapping up salt from the mud.

A Weidemeyer’s Admiral posed nicely for me, showing both that distinctive upper side 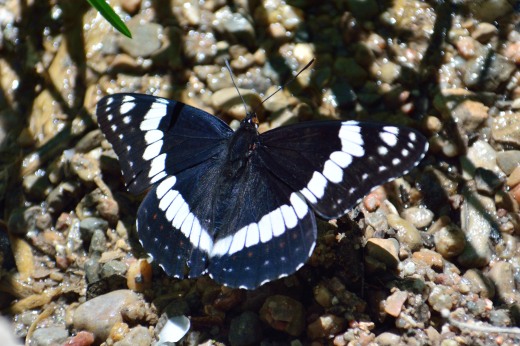 and surprisingly detailed and colorful underside.

A few days later, I’d get a picture of one backlit against the sun where you get a little of both. 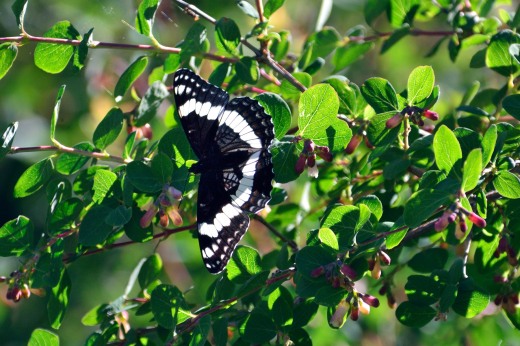 The Arizona Sister looks a bit similar, but is in a different genus close to that of the Admirals.

Rebecca spotted a little tiny guy on the mudflat that we couldn’t identify at first, but turned out to be a first of the season Russet Skipperling.

That one was a good reminder for me to look over our past data before heading out on these trips, as it does help to have an idea of what to expect in a known location at that time of year. A surprise that day, and not one we’d seen there before and rarely seen anywhere else was a California Tortoiseshell.

Looking a great deal like one of the closely-related “Commas”, they’re pretty distinctive on top with just a touch of white and fewer dark markings.

The above picture is actually of a second one seen at Bill Spring four days later, along with even more of those swallowtails.

A Hoary Comma also showed up at Bill Spring, shown below for comparison (and because I thought the photo turned out pretty well). 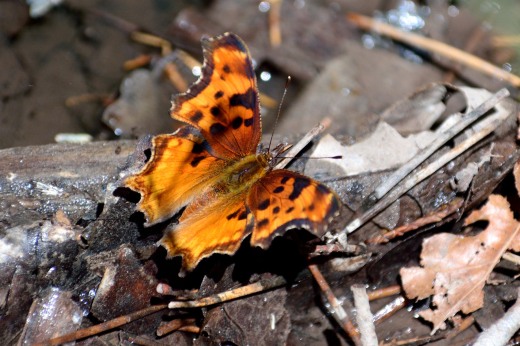 Another nice surprise nearby in Cienega was an Arctic Blue, a species I only see maybe once every other year in the Sandias.

Pretty common all year anywhere there’s leaf litter to hide in is the Mourning Cloak, one of which gave me a nice look at its markings.

With summer arriving in just a few short days, we should start seeing a few more butterflies start flying, maybe some of those damselflies and dragonflies that I just haven’t gotten around to looking for yet, and always some fun new bird sightings.

6 Responses to The Hits Keep Coming