Other than a quick weekend blast of rain turning to snow, the weather has been fantastic around here recently with plenty of migrating birds starting to arrive. A few more nesting species and young birds are being seen, and all that moisture is bringing out more butterflies attracted to the newly blooming flowers. Only a couple of Great Horned Owl pictures this week, first the one in Taylor Ranch where there are now two little ones to be seen, though the younger one is still pretty small and tends to hide  under the adult,

and my late bloomers at Piedras Marcadas, where the first one finally popped up to look around.

I haven’t been back to several of the other nests lately, but really need to go check on them since all those little ones are getting quite mature and are about to disappear into the woods. Certainly everybody’s favorite at Albuquerque Academy is about there and I didn’t see anybody on my last visit Thursday, but saw that my friend, Michele, spotted the nearly full-grown owlet in a nearby tree later that day.

In other nesting news, we seem to be having Osprey getting ready to nest at Tramway Wetlands, an exciting development since it will be a first for Bernalillo County. They have nested regularly in Sandoval County to the north, but apparently not this far south before. This picture is from last Friday morning, the start of a cold and rainy weekend.

It was exciting to see a Western Grebe there in the water,

and I’d see another one later in the week on the river near Pueblo Montano. I missed seeing the Eared Grebe and several other good shorebirds being reported at Tramway Wetlands, but hadn’t really spent enough time looking around to spot any of them. By Monday, all that bad weather had passed and a return visit had both of the adult Osprey and maybe another young one flying around gathering additional material to build up that nest.

Several times this week had me down at Pueblo Montano Open Space for some great birding. My first trip on Monday followed a report by my friend, Susan, of an amazing variety of shorebirds she’d seen there the day before apparently brought in by all that weather. While most were gone by the time I got there, during the week I’d still see a number of them over several visits. A favorite, of course, were the baby Killdeer who’d recently hatched and were busy running about on the mud banks under the close eye of the adults.

Summer Tanagers were present in large numbers on every visit there. This is the first bird seen on my trip Monday, and the first of quite a few species that day that were new for the season for me.

On the most successful Audubon Thursday Birder trip there this week, our large group of 37 people would tally at least 57 species, including Lazuli Bunting, Blue Grosbeak, Marsh Wren, and quite a few other new species for the year. Summer Tanagers were just about everywhere that day, too. 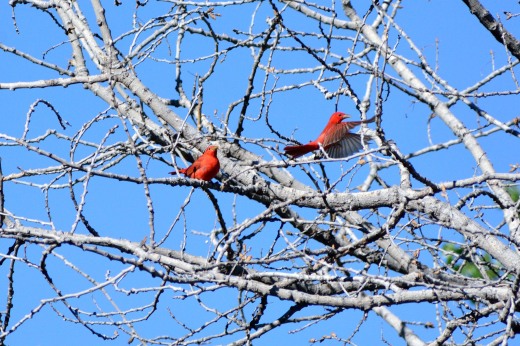 On my Monday visit, I scared up a Green Heron from one of the flooded areas inside the woods,

who we’d also see headed down the Rio Grande on Thursday. A Spotted Towhee singing loudly from a Russian Olive allowed me to approach quite closely for a photograph on Monday, 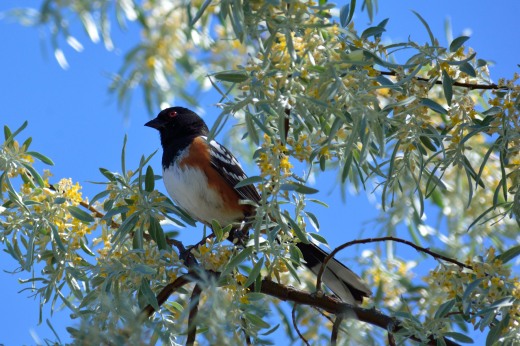 and on Thursday, so did a Black-headed Grosbeak.

Along the irrigation ditch, several Black Phoebes were seen on every visit. On Monday, what I assume is a male posed nicely for its portrait;

on Thursday, we spotted a nesting female; 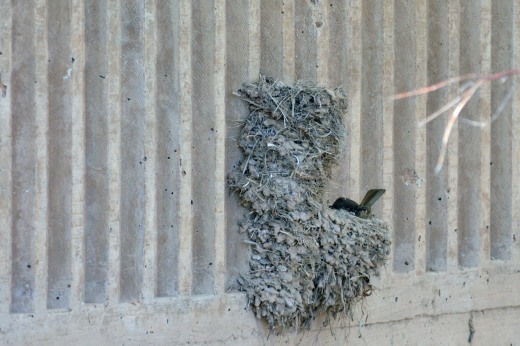 and on Friday (I’d returned once again unsuccessfully looking for the Great Horned Owl nest I’d heard about the day before), while the female was away, I got a look at the eggs in that nest from above.

Don’t ask how I got that picture-it required getting all involved with a Russian olive tree and some rather creative contortions to get everything lined up and in focus.

The visit on Friday also turned up American Avocet, which Susan had seen on Sunday but the group missed on Thursday. New for me was realizing that the white one (3rd from the left) is in the winter plumage; I’d only seen them in their usual summer plumage, which my field guide calls  “cinnamon” (one of a surprising number of variations for the color brown among bird names).

I also managed to get a little closer to a Yellow-breasted Chat, a rather noisy bird that tends to hide in marshy areas. 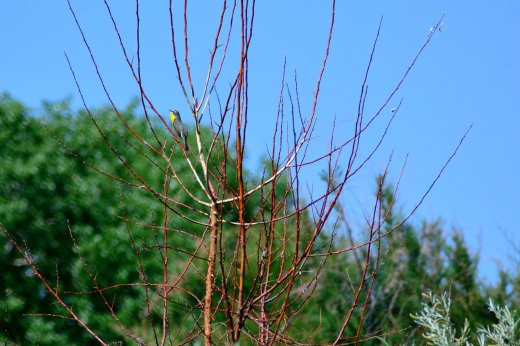 All the turtles are out sunning themselves again as the weather turns warmer. 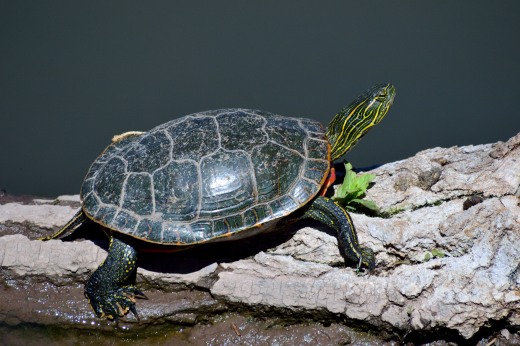 My other objective this past week has been to get a decent picture of the Scott’s Oriole that was the highlight of the Audubon Thursday Birder trip to Embudito Canyon the week before. The Thursday Birder bunch will usually spot one in that area at this time of year, but usually only after Rebecca recognizes their song and then someone in the group spots one high in a juniper way across the canyon. This bird really doesn’t seem to like anyone getting very close. On my first two visits after the Thursday trip, the birds were hiding and never showed themselves or called out, but they finally appeared for me on a visit last Wednesday. Singing from high in a juniper, I took my time approaching the stand of hackberry trees that provided a bit of cover and got a couple of shots of the male still pretty far away. Noticing some rustling in the hackberry trees themselves turned up the female quite nearby and (bonus!) carrying some nesting material.

The male then played with me for probably half an hour, letting me almost get close enough before flying right by me over to the far side of the canyon. I’d head over there only to have him zoom back across to the hackberry trees, and we’d play this game several more times. This is as close as he would let me get, so after he posed long enough for this shot, he won the game and I headed on out.

There were a good number of butterflies in Embudito this week as well that made for a couple of good photos. One was a very fresh Variegated Fritillary

and, a bit worn but colorful, Mylitta Crescent.

First of the year for me was a Northern Cloudywing that we might have had in Las Huertas Canyon a couple of weeks ago but I didn’t get a picture.

A bit surprisingly, no hairstreaks seen there this week, but I did see another Acmon Blue right about where one was seen a few weeks ago.

Anywhere I went anytime this week, there were always a few White-lined Sphinx Moths flying about in unusually large numbers. Always fun to photograph and I keep trying different camera settings hoping to freeze those wings with varying degrees of success. This one was fun spotting two of them competing for the thistle that has just started coming into bloom. 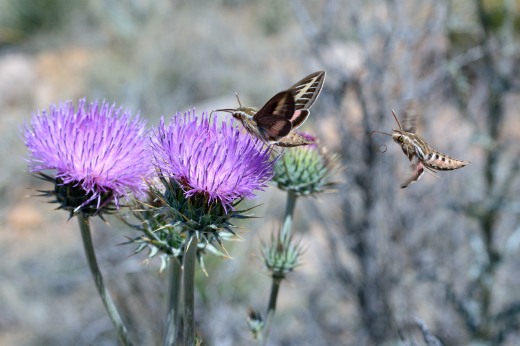 7 Responses to Moving into May