Business is Picking Up

Lots of things going on out there this past week with a few new birds and butterflies showing up almost every time I look. Last week’s Audubon Thursday Birder trip headed out to Pena Blanca and Cochiti Lake, rated a clear success with the group of 22 birders seeing some 42 species, including the expected Black-billed Magpies, a nice look at a Western Grebe on the lake, and the Ospreys busy doing their thing.

Not quite sure what that thing was, but one (presumably the male) simply hopped up on the other (the female?) using her as a launching pad for flying to the nearby telephone pole. Last stop of the day was at the library in the small Cochiti Lake community, where a Two-tailed Swallowtail caught our attention.

The day before, I stopped by to check on the Great Horned Owl nest near Tingley Beach where I’d seen the nesting female a week before, but hadn’t spotted the owlets others had been reporting. This time, both of those little ones popped up for me,

one of which seemed to take considerable interest in seeing what I was up to.

A couple of days after that took me back to Albuquerque Academy to check in on the one owlet there that’s usually been hiding when I visit. This time it sat up and took a long look at me, while the adult female was perched much higher in the same tree and the male was hiding pretty well in a nearby cottonwood. 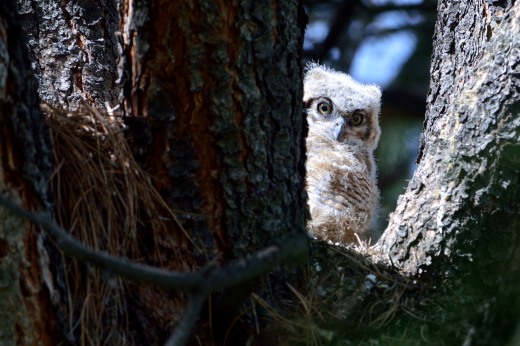 On my walk in to check on them, an American Robin posed for me almost too close to focus on, 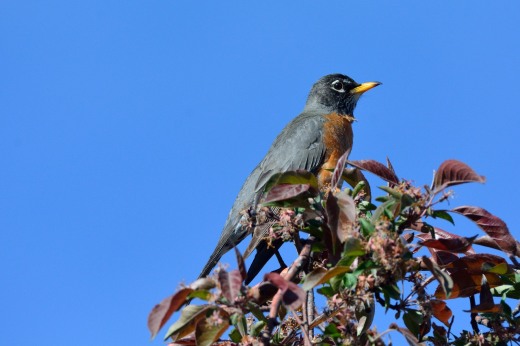 and on the far side of the parking lot, what I think was a young Swainson’s Hawk was busy surveying the neighborhood. It didn’t have the red tail of a Red-tailed Hawk, but did have the start of that dark hooded look. They’re certainly being seen around town of late and have nested in that area in past years. 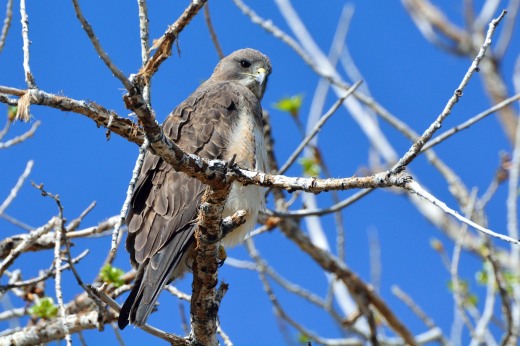 Thanks to friend Kathy, it was easy to locate the Cooper’s Hawk nest at the Rio Grande Nature Center a little later that morning, and fun to spot the male nearby in the same tree.

Saturday morning had Rebecca and I out looking for butterflies in Las Huertas Canyon near Placitas for the first time this year. We’d see a couple of Dainty Sulphurs, Hoary Commas, a Question Mark, and a surprising number of Red Admirals, a butterfly we’ll see every year but rarely more than one or two. 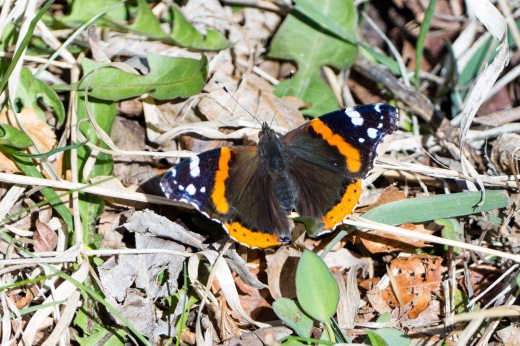 Interestingly, while we did finally spot a couple at our usual spot in a big meadow near Sandia Man Cave, the first one that day was just parked on the asphalt at the upper picnic area parking lot.

Sunday had me out checking in on my owls on the west side. The pair at Piedras Marcadas Dam got started late this year, so the female’s still sitting patiently on the nest with the male hiding in the leaves some distance away. A pair of Cooper’s Hawks, who undoubtedly are a bit bothered the Great Horned Owls took over their nest, were busy chasing each other about and calling loudly and occasionally zooming by fairly close to where I was watching – will definitely have to follow up and see where they might end up nesting.

It was a treat to find at my other nest on the west side that there’s at least one little one, and I’ll have to return soon to check on that one and to see if there isn’t at least one more hiding in there.

Monday, I met up with friend Judy for the hike into Cienega Canyon hoping to see the Northern Pygmy-Owl which has reportedly begun nesting there again this year. The two of us and two other guys who were already there kept an eye out for more than an hour, but never caught a look at the owl. For awhile we had a couple of Red-tailed Hawks in the area, one that flew between several different perches,

and then chased the other one around in the sky, a bit too much commotion that probably kept the owl in hiding.

At one point, a Northern Flicker showed up and was busy investigating the nest hole where one of those guys had seen the owl enter earlier that morning, but even that didn’t get the owl to pop up and run off the intruder.

Several Red-naped Sapsuckers were back in the area, too, and will probably begin nesting soon.

This morning had me checking in on the nesting owls at Willow Creek Open Space, a nest I hadn’t checked in on since late February. Obviously, things are moving right along there, with two little ones taking a hard look at me while Mom dozes in the background, and Pop still keeping an eye out from his usual spot.

Nearby, I noticed a pair of American Kestrels perched in a small tree, and wouldn’t be at all surprised if they don’t choose one of the snags in the open field for their nest. One took off as I apparently got a little to close.

That reaction also woke up a Greater Roadrunner poking around in the field, prompting it to dash away in typical ‘beep-beep’ fashion.

Wrapping up my visit to Willow Creek, it was a treat to spot the nesting Cooper’s Hawk that I’d heard was in the area. 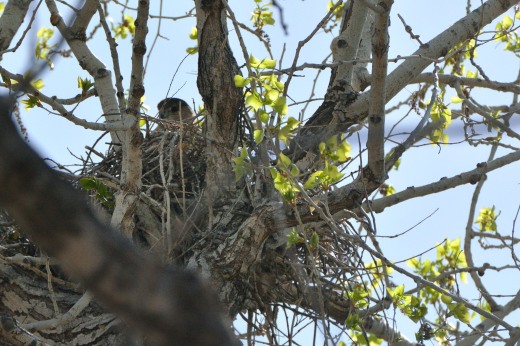 Later in the morning, it seemed a good time to take a quick look for butterflies in Embudito since I hadn’t been there in a week or so. Still had a couple of Sandia Hairstreaks and Southwestern Orangetips flying there, and spotted a couple of other species including a Two-tailed Swallowtail puddling in a muddy area, but the highlight for me was seeing a Curve-billed Thrasher on her nest right by the trail. When a couple of hikers and their dog unwittingly passed by, she flew off to distract them, and I snuck up for a quick shot of those gorgeous eggs, the first I’ve seen for that species.

6 Responses to Business is Picking Up