Spring arrived here Monday after a week of gorgeous weather and warmer temperatures that have gotten all the fruit trees in bloom and even a few wildflowers starting to show up. Following up on last week’s post,  a number of times this week has had me dropping by Albuquerque Academy to check on the Great Horned Owl nest. Since she’s been sitting there since at least February 4, little ones should make their appearance any day, and sure enough, on Sunday folks started posting the first pictures of one. Naturally, I’d last been there the day before with no luck, stopped by a couple of other times this week, and finally got to see one yesterday – am thinking I’m getting a bit obsessed with all this since this was on my third visit that day! Fuzzy tennis ball was just snoozing for me, but seems to have woken up for others that have been by to visit.

Proud papa was also there sitting in his usual spot, but showing off those sharp talons a little more than normal.

On most of my recent visits, I’ve seen and heard Lesser Goldfinches and Say’s Phoebes in the trees, making me thing we might start seeing them nesting soon, too. 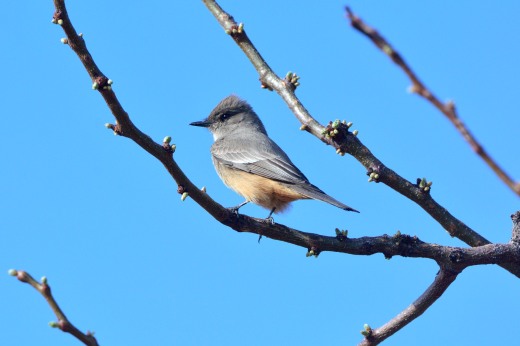 In other good news this week, my owls in Piedras Marcadas finally got organized and on Wednesday last week, the female had assumed the position on that good nest and will no doubt be there for at least a month, 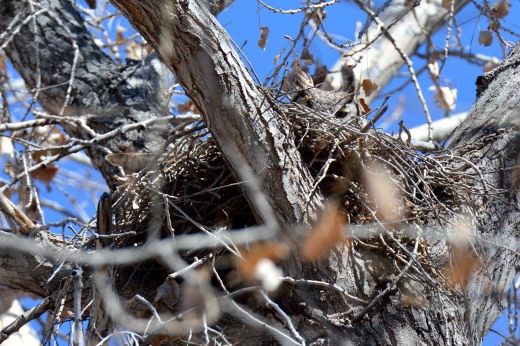 with the male keeping a close eye from nearby, but still letting me get maybe one picture before unusually flying off to another hiding spot.

Friend Kathy, who seems to share this owl obsession, was nice enough to tell me about a Western Screech-Owl that also required several visits from me at different times of the day before finally popping up for a few seconds from what must be a fairly spacious cavity. Almost like Whack-a-Mole, it would rise up, look at me, then drop back down out of sight.

Other outings this past week have had me out looking for butterflies mostly in Embudito Canyon, but a few other spots as well, and enjoying spotting one or two new species for the year almost every time. Checking on Embudito with Rebecca last Friday, for example, turned up a Gray Hairstreak (Strymon melinus), 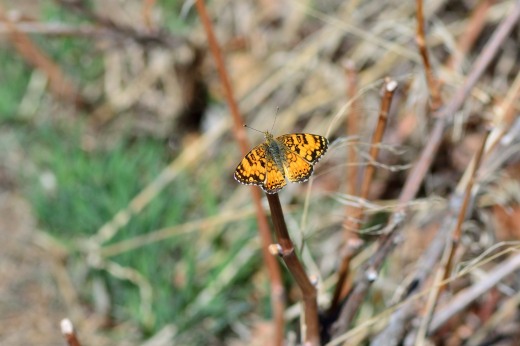 One of those and its cousin, the Sleepy Duskywing (Erynnis brizo), would show up a couple of days later. There was even a Question Mark (Polygonia interrogationis), which brings my Embudito list to 60 species (Photos were pretty poor, but good enough to identify). Of course, there were still good numbers of Sandia Hairstreaks (this one from later in the week one of my better ones),

Southwestern Orangetips, this one my first good shot this year of a female – she’s got that white stripe between the orange patch and the black edge of the wingtip; in the male (posted last week) the orange merges with the black,

and a couple of Spring Whites. 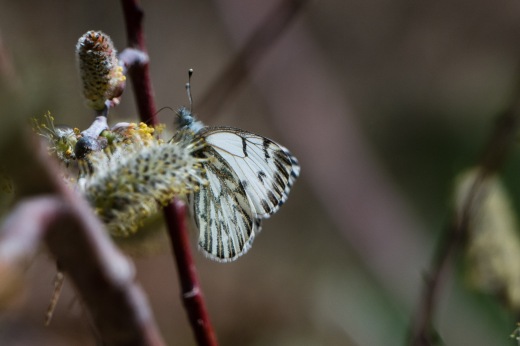 On Monday, Rebecca and I took a look around Sulphur Canyon and Doc Long on the east side of the Sandias, but were a little surprised not to see all that many butterflies yet. It might just have been a little too early or still a little too cool back there. A few things were flying, however, including a mysterious Blue that flew by without landing to confirm its identity, several Mylitta Crescents, Mourning Cloaks, and my first Hoary Comma for the season. 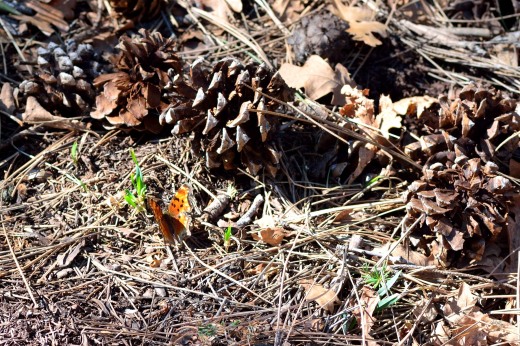 Mourning Cloaks and Hoary Commas are among the few butterfly species that overwinter as adults in the leaf litter, so it’s not a surprise to find them flying once things warm up just enough. Other species that have been showing up in Embudito this week are the Two-tailed Swallowtail (Papilio multicaudata), Dainty Sulphur (Nathalis iole), and an unusually early Short-tailed Skipper (Zestusa dorus). The Short-tailed Skipper was one that had me baffled just above the waterfall in Embudito yesterday when I was out with friends Sarah and Christine looking for their first Sandia Hairstreaks.

1 Response to Moving Into Spring