With one week to go before the actual start of Spring, the weather around here of late has been basically wonderful. Generally sunny with temperatures rising into the 70s and only a few windy periods, the fruit trees are blooming all over town, green tips starting to show on other trees, and we’re seeing new butterfly species for the year on almost every trip outside. Almost every year visitors from out-of-state contact me about wanting to see the Sandia Hairstreak, our State butterfly that was first identified in 1958 in the nearby foothills of the Sandia Mountains. Since hearing from a butterfly enthusiast from Tucson last week, I’ve been making regular visits to my “local patch” Embudito hoping to be able to find some on his visit tomorrow. Conditions should be good for them, and there have been quite a few seen lately typically on their host plant, Texas beargrasss (Nolina texana). Surprising to me this year was also seeing them on the budding willows close to the little amount of flowing water in the canyon.

The other early Spring butterfly I’ve been seeing regularly is the Southwestern Orangetip (Anthocharis sara thoosa). These guys generally seem to be on the move somewhere, rarely landing for even a second, and then disappearing into the distance. There was something about that willow, however, that caught their attention, too, 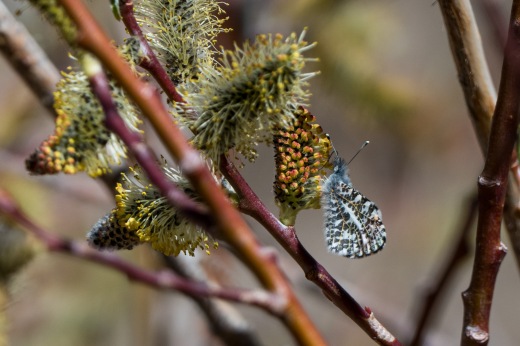 and when they open up, you can see where they get their name (and that this one is a male).

On my first couple of visits, it was just one or two butterflies that had found the willows, but as usual, large numbers of Litocala moths have now arrived making it difficult to spot a butterfly in their midst. A couple of other new for the season species that have dropped by include a Variegated Fritillary

and a Common Checkered-Skipper.

Since 2011, I’ve seen an amazing (to me) 59 butterfly species in the lower part of Embudito Canyon and will hope to add a few more in the months ahead.

On most other outings in the last week, I’ve been making the rounds of my nesting Great Horned Owls and continuing to look around other areas more may be nesting. In one of the nests on the west side of the river, things seem to be progressing normally with the female perched comfortably on the nest but keeping an eye out for visitors like me,

but it was also cool to finally spot her companion hiding in a nearby tree (thanks to my friend Kelly for telling me).

Never spotted that guy last year at all, but he seems to have taken up this hiding spot I’ve managed to pick him out in on my last couple visits.

My pair of owls in Piedras Marcadas are still acting goofy. Several years ago when I’d first seen them, they nested late in the season and then took months to successfully have little ones. This year, I’ve usually seen one of them and sometimes both of them on most visits, but they haven’t quite gotten around to nesting yet. Last Wednesday at least they seem to have located the tree that’s got the perfect old hawk nest, but were still hiding in the lower branches of that big old cottonwood. Here’s the first one I noticed (who I somehow think is the male that atypically flies away as soon as he thinks I’m not looking), 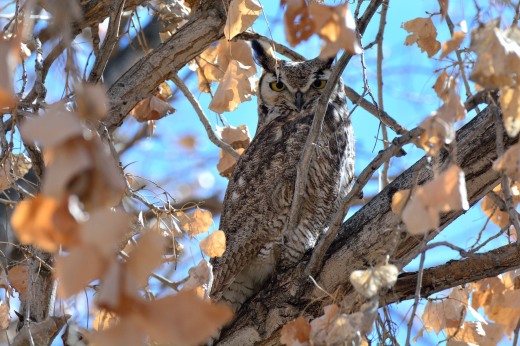 and here’s the other one that was at about the same height but about 20 feet away. 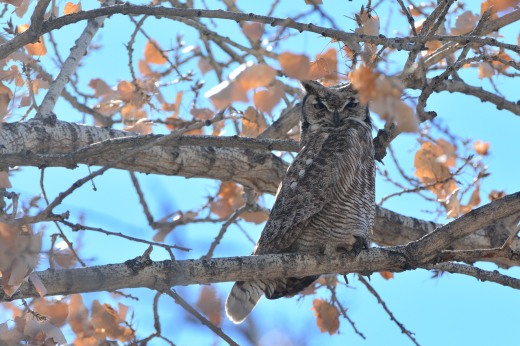 Interestingly, while I was there neither one moved at all – much more typical of my experience. Hopefully, they’ll get with the program soon since the Cooper’s Hawks are starting to show up again, too, and will re-claim their old nest if the owls haven’t taken them over.

Things are still confusing near Calabacillas Arroyo this year at the spot they’ve used for nesting the last several years. Although they, too, had been seen on February 4 defending their territory against some attacking American Crows, since then it’s been hit or miss seeing the owls and not obvious at all if they are nesting in the same cavity. After a number of unsuccessful visits since then, it was a treat to spot one of them (the male, I think) yesterday still close to the nest location.

That he’s still there gives me hope she’s nesting somewhere nearby, but I’ll just have to keep looking. She might be in the old snag she’s used before, but I’m thinking she might have found someplace a little more discreet somewhere in the immediate area.

At Albuquerque Academy, where I’d first seen them nesting on February 4, things are coming along nicely. Here she is on March 5, sitting up a little higher in the nest than back in early February. 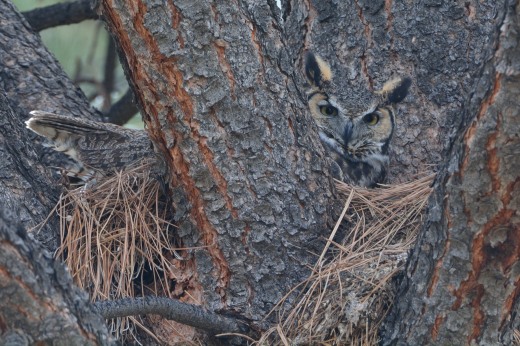 And here she is from last Friday (March 10) sitting almost straight up.

Given the typical incubation period of 30-37 days, no doubt we’re going to spot those fuzzy little tennis balls any day now. A treat that day was spotting the proud papa a bit higher in the same tree; he’d eluded me earlier this year.

All’s good at Willow Creek when I stopped by today, and from eBird reports all seems well for the Campbell Road pair that I haven’t checked in on since mid-February. Just for grins, the other day had me poking around in Route 66 Open Space in the foothills near Tijeras. I haven’t found any active owl nests there in a few years, but usually manage to find an owl hanging out by the water in that rather isolated location. No luck that morning, however, so I’ll be back. Nice fly-by of a Red-tailed Hawk made up for it. 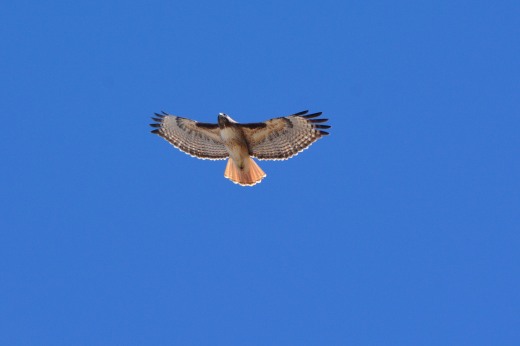 Last treat of the week was hearing that the Western Screech-Owl was back at Tingley Ponds in the roost we’d seen one last year. Sure enough, there it was peeking out at me when I dropped by last Wednesday.

5 Responses to Making the Rounds