Winter has officially arrived with this morning’s winter solstice, but the good news is that means the days will finally start getting longer again. Seemed like winter should’ve been here earlier judging by the weather conditions around here lately, but of course today turned out just about perfect – sunny, no wind, and the temperature almost warm and back in the mid-50’s, a nice break from the icy rain we’re expecting all day tomorrow. In Embudito this morning, a Cactus Wren seemed to be really enjoying the warmth and would still be hanging around the same spot on my way back out the canyon as he was on the way in.

Since my last update, my friend Terri was in town for a couple of days and a bit of birding. Typically cold and/or cloudy, we didn’t see too many birds (other than a huge flock of horned larks at Valle de Oro one afternoon), but did see a porcupine or two up in the trees and a coyote running away from us, and had a magical sunset at Piedras Marcadas Canyon where we’d gone to look at some of the petroglyphs. The petroglyphs were easier to photograph in that low slanting light, the nearly full moon rose up over the Sandias, and then we had a blast of ever-changing colors as an incredible sunset got underway.

The Audubon Thursday Birder trip to the Tingley Ponds last week had me worried there was no way we could possible meet our success criteria (birds/people >1) especially when 41 people showed up that morning. Sure, we’d probably get a few more waterfowl species than on most of our trips, but all those other little birds tend to be hiding in the bushes on cold winter mornings. It was therefore a delightful surprise tallying up the list at the end of the walk to come up with a total of 45 species – an excellent total for two hours on a wintry morning – thanks, Linda, for leading it! One of my better pictures from that day is this male Northern Shoveler

and I also was glad to get an okay shot of the single Redhead floating out on the southern pond near the end of the walk. 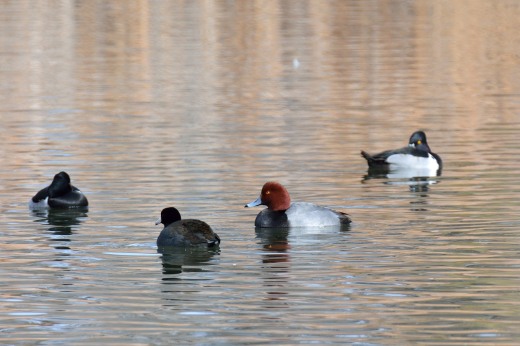 The day before, I’d gone to Calabacillas Arroyo on my quest for Ruby-crowned Kinglets, Brown Creepers, maybe a Bald Eagle, and thinking it’s getting about time to start looking for potential nesting spots for Great Horned Owls. About the only bird I did see other than a few Coots, Mallards, and gulls on the river was this Red-tailed Hawk flying along the irrigation ditch. 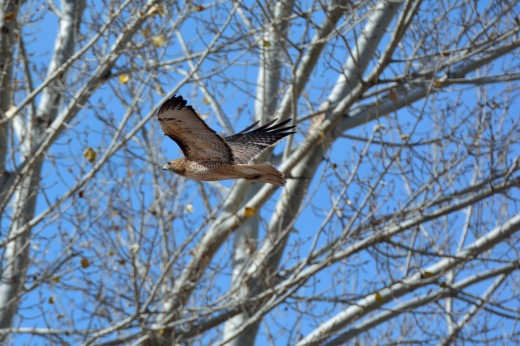 Once again, it’s time for the annual season of Audubon Christmas Bird Counts, and Rebecca and I headed down to the Bosque del Apache NWR on Friday to scope out our area in advance of Saturday’s CBC. Windy and pretty cool on Friday, after checking out our area just north of the refuge, we drove around the refuge itself to see a few other birds, including the Tundra Swans that have been there for a couple of weeks now, and the Sandhill Cranes 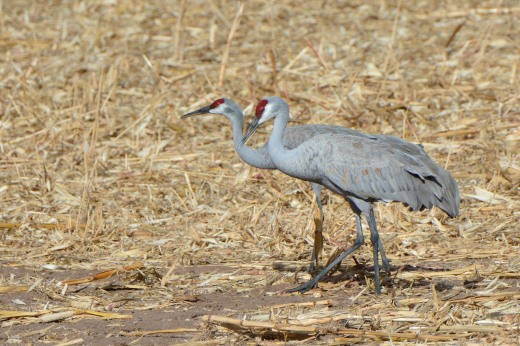 and Snow Geese spending the winter there.

The morning of the count started off with a cold drizzling rain and thick clouds that wasn’t promising for seeing many birds. The rain stopped fairly quickly, though, and the clouds finally broke up as the day went on, and the temperature was a bit more reasonable than expected from some other years. One of the birds we’d spotted the day before, a Ferruginous Hawk, finally appeared in the same area to be added to the count,

and after lunch, caravanning with our friends Bernie and Pauline who were helping with the count, we got the Phainopepla that had eluded us the day before.

Later at the Birder’s RV Park, we added a Curve-billed Thrasher 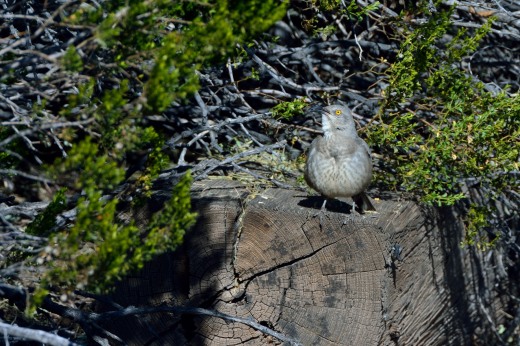 but missed seeing the Crissal Thrasher that had popped up there the day before.

Meeting up with the entire group at the end of the count, we decided we’d done pretty well with 50 species, although the weather kept the numbers down to around 100 species overall. Then it was a quick drive back home for Sunday’s CBC in Albuquerque the next morning.

For the Albuquerque count, we meet by the river at dawn to tic off the Black-crowned Night-Herons who roost there at night, and then cover a good part of the Village of Corrales for the rest of the day. Way colder at the start than it’s been around here since last winter, we’d do most of our counting from the car but got out for a few short hikes through the woods looking for more species. Our total for the day was 40 species, including this Spotted Towhee and a ridiculous number of 269 Sandhill Cranes.

For the Albuquerque count as a whole (birds counted in the 15-mile diameter circle centered at Paseo del Norte and 2nd Street) the species list compiled so far is up to 111. The National Audubon Society has a map of all the circles for this year’s count on their website. With over 1900 circles in the US, all that data gives a pretty good snapshot of the nation’s avian population over a 3-week period between December 14 to January 5.

Taking a day off after three days of non-stop birding, I headed back out to Alameda Open Space yesterday and did see several Ruby-crowned Kinglets where I’ve been looking for them lately. This one came out pretty well showing the male’s little ruby crown, but I’ll need to spend a little more time or have more patience to catch one really showing it off like they do when really agitated or excited. 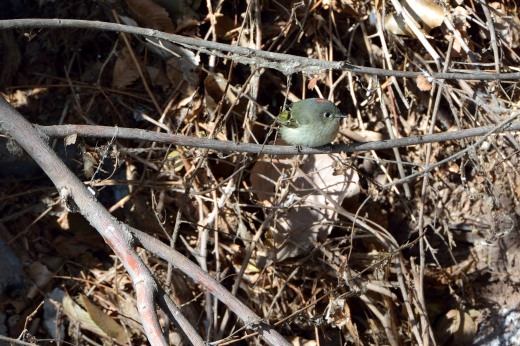 I kind of thought he just might when this rather territorial Black Phoebe shooed him off the bank, but the kinglet chose to fly away rather than stand and fight.

One more CBC coming up the day after Christmas, the Sandia Christmas Bird Count. For that one, we’re off to the East Mountains on the other side of the Sandias, where the weather can be a bit more tricky but we’ll probably see a few species that aren’t often seen in town. Weather’s looking a bit dicey over the next couple of days, but looks good for the count.