Posted on September 16, 2016 by joeschelling

As we move closer to the start of autumn around here, an interesting change occurs in the natural world around us. The annual fall migration of birds has begun and we’re seeing many different kinds of warblers and shorebirds passing through, and the arrival of the first Sandhill Crane was reported this week. Following the summer monsoons, many plants are blooming and all manner of insects have started appearing.

Last week’s Audubon Thursday Birder trip headed to the east mountains and the Manzano Pond and the Quarai unit of the Salinas Pueblo Missions National Monument. On a day that started out cool and cloudy, it eventually turned warm and sunny providing the group good looks at many of those warblers and plenty of other good birds. Two that I got photos of at Manzano Pond included a male Wilson’s Warbler

and one of a party of several Orange-crowned Warblers. 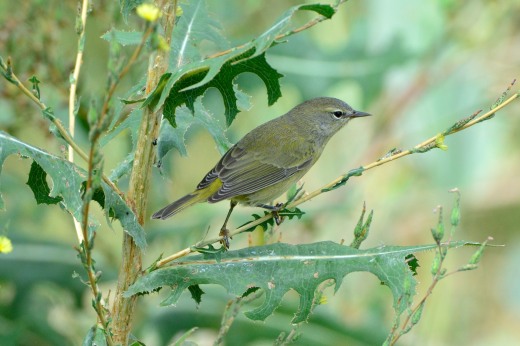 Birding slowed down a little later in the morning at Quarai, but we’d still add another 25 species or so, including a Barn Owl that flushed out of a tall cottonwood and a Golden Eagle high in the sky.

The next day, hoping to track down a few more warblers I dropped by the Rio Grande Nature Center, but must’ve gotten there a little too late in the morning and didn’t see many birds at all. There was, however, a young Red-tailed Hawk that circled above me for quite some time until a young Cooper’s Hawk showed up to chase it away – seems the Red-tailed won the fight eventually running off the smaller Cooper’s.

Later that afternoon, I met a friend at Embudito who wanted to try out my 80-400mm lens before deciding whether or not to get one for herself. Pretty quiet in the still heat of the afternoon, but we traded lenses and photographed anything we did see. Just as we were wrapping it up, a special butterfly dropped by and perched long enough for us to take a few pictures. Turned out to be the Apache Skipper that I’d hoped we might spot there since it only flies for a short period of time and is a butterfly I’ve only seen there once before and rarely anywhere else. 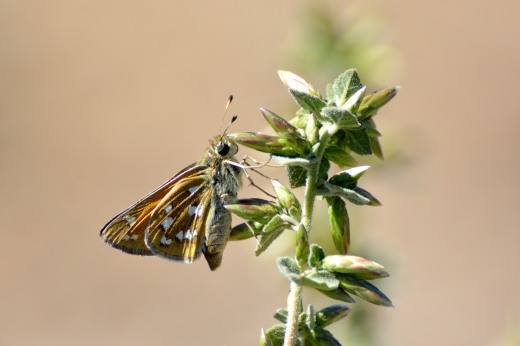 A couple of days later, it was off to Cienega Canyon, Bill Spring, and Capulin Spring on another quest for some of those warblers and to look for some late-season butterflies. Surprisingly, there were very few of either flying at those locations that morning. One or two Arizona Sister butterflies appeared at each spot but were constantly on the move, and even at Capulin Spring, which usually draws in a good variety of birds, only a couple of Dark-eyed Juncos dropped in for a quick splash. Bill Spring eventually turned up a wary American Robin and then a small group of Mountain Chickadees.

In addition to the bird migration that’s well underway, various species of butterflies also migrate, the most well-known of which is the Monarch. We only seem to see them here from late August into October on their journey south, and two of the spots we’ve seen large numbers include Piedras Marcadas Dam here in Albuquerque and at Whitfield Wildlife Conservation Area in Belen. Both of these areas have good amounts of their milkweed host plant and large fields of a favorite nectar plant, sunflower.

The picture above shows the sunflowers in full bloom at Whitfield last Tuesday during a butterfly tagging event run by the Southwest Monarch Study.  This organization is researching the migration and breeding behavior of Monarchs in the southwestern U.S., and we had a group of about 15 folks wandering through all those sunflowers, some attempting to capture and apply small numbered tags to hopefully be recovered at some future point in the migration. Monarchs are known to over-winter in southern California, southern Florida, and a famous location in Michoacan, Mexico; what is still unknown is where those migrating through Arizona and New Mexico might be heading.

In addition to the 40+ Monarchs we’d see that day were two other butterflies that mimic the Monarch. The Queen is a different species in the same genus.

The Viceroy is in a completely different genus but has similar coloration to the Monarch apparently to fool predators. Always a treat to see, this is a species I’ve only rarely seen here. 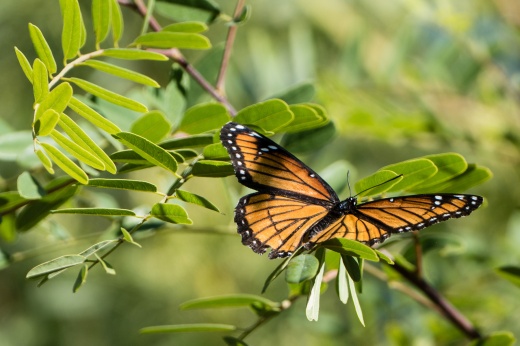 Whitfield is always dependable for a couple species of Crescent butterflies that we don’t seem to see in Albuquerque, including the Pearl Crescent

and the Painted Crescent.

This week’s Audubon Thursday Birder trip also went to Whitfield Wildlife Conservation Area, with a stop first at the Belen Marsh. A very productive outing with the group of 19 birders tallying more than 50 species for the morning. Belen Marsh turned up a good variety of shorebirds despite the water level being quite low. Special sightings included a Sora, several species of Sandpiper and Yellowlegs, and American Avocet in its non-breeding plumage. 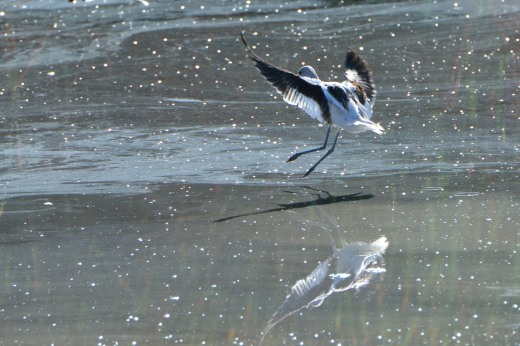 In the nearby field, a few folks even spotted a pair of the Burrowing Owls, a species that hasn’t been reported recently in the area. Then it was on to Whitfield for a longer walk than the group normally takes, but that would turn up a number of other good birds for the day. With the group well spread out, some would only be seen by a few, one of which was a Townsend’s Warbler, a new species sighting for the Whitfield list. My best photo of the day came right at the end when we returned to the Visitor Center, a female Black-chinned Hummingbird nectaring on a Firecracker penstemon. 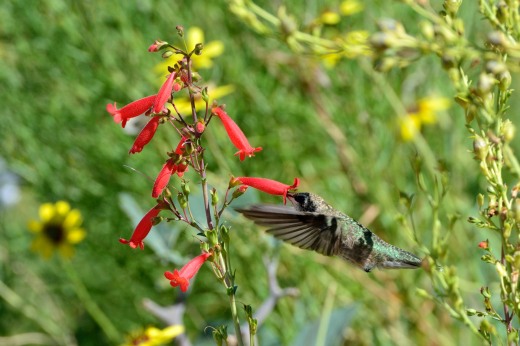 On a nearby globemallow, it was interesting to see three stages of the globemallow leaf beetle, the black larval form, the greenish gold of the mature beetle, and the red immature beetle. 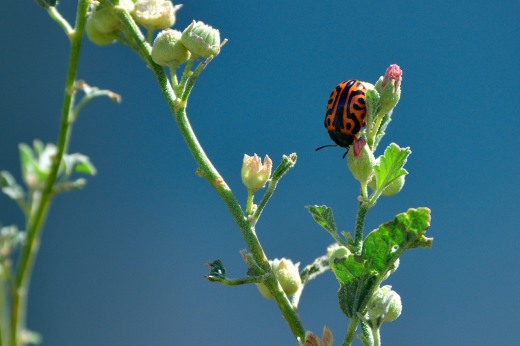 Several different dragonflies (and a few damselflies) were busy around the ponds that morning. I like this picture of a Twelve-spotted Skimmer resting on a cattail as another one comes flying in. 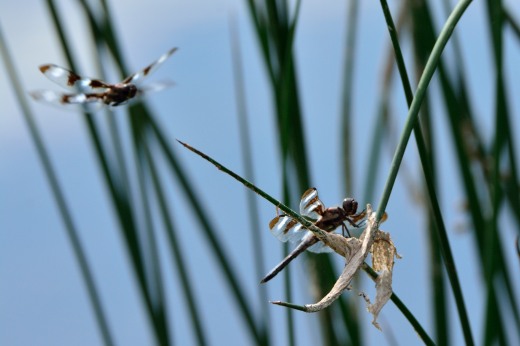 A Flame Skimmer also seemed to have a favorite perch on a cattail, flying off and returning to the same spot several times. 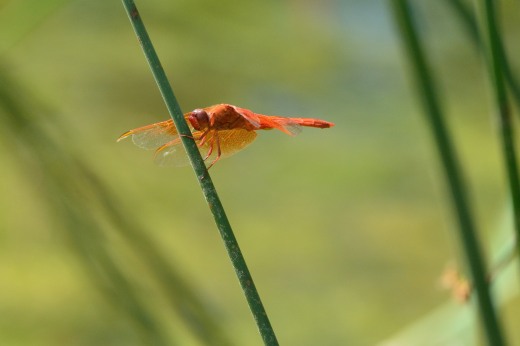 Quite a few other insects were out and about as well, including a large underwing moth and praying mantis clinging to the Visitor Center wall, plenty of different species of ants and bees, those figeater and other beetles, and a good variety of grasshoppers. 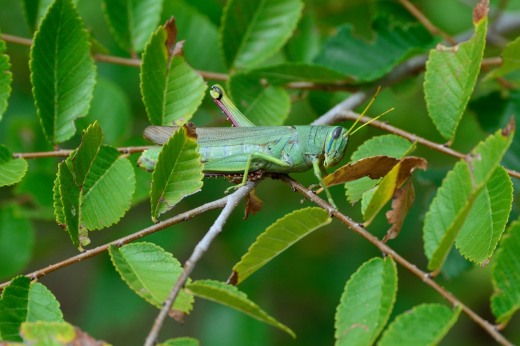 In the coming week, I’ll no doubt be out looking for those warblers again, keep an eye out for more interesting insects, and expect to be seeing some of the interesting spiders that usually appear at this time of year.

6 Responses to Birds and Bugs