An Interesting Start to September

Posted on September 7, 2016 by joeschelling

The past week has turned up some pretty interesting and unusual sightings as I’ve gotten out a little more often. There are hints of autumn’s approach with the weather turning delightfully cooler and the purple asters and golden chamisa starting to come into bloom. Many of the birds and Monarch butterflies have begun their annual migration and an interesting mix of insects have begun appearing.

A week ago Monday, Rebecca and I drove down to Whitfield Wildlife Conservation Area in Belen where we weren’t surprised to see large numbers of Monarch and Queen butterflies nectaring on the milkweed as the Monarchs pass through on their Fall migration.  There is a good variety of nectar plants at Whitfield attracting a number of different butterflies at this time of year, including the Bordered Patch.

More surprising to see was the American Snout, of which we’d see two individuals that morning and another one in Albuquerque a week later. 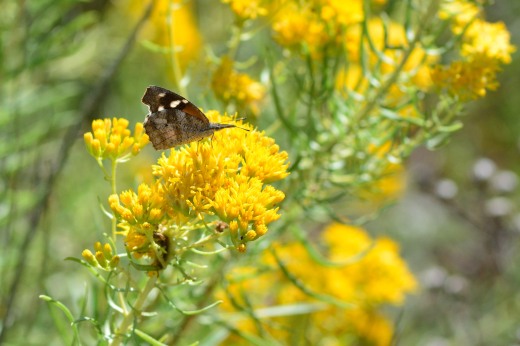 Several cool bugs were sighted there as well. My last posting had a picture of the very cool Globemallow Leaf Beetle mating and laying eggs; at Whitfield that morning we’d see their larvae – almost as large as the adults already, but not very attractive, and looking like black, hairy grubs. Another favorite of mine is the Asilidae Robber Fly with its huge emerald eyes. 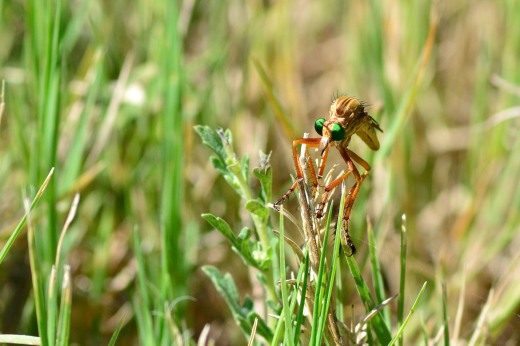 A new one for me was the Fire Blister Beetle, 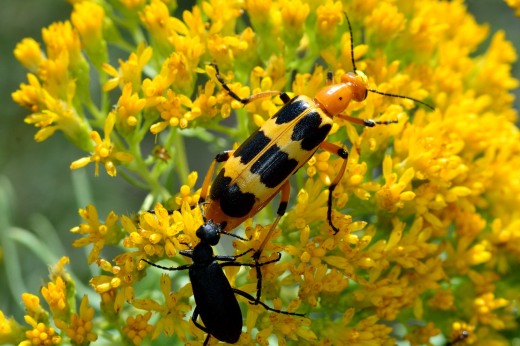 and as usual, there were any number of Figeater Beetles busy foraging.

The next morning I wandered down to Calabacillas Arroyo, since I hadn’t been there since my Great Horned Owls had left their nest a few months earlier and would be the location for the week’s Audubon Thursday Birder trip a couple of days later. It seemed a little quiet for birds that morning until I reached the dam near Alameda Blvd, where there was a Great Blue Heron off in the distance and a Snowy Egret working the shoreline. Moving closer to photograph the Snowy Egret, it flew as short distance downriver only to land right by a Green Heron. 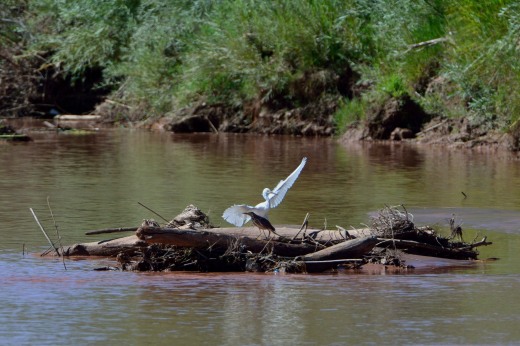 Returning on Thursday, it was a treat for the Thursday Birder group to see the Snowy Egret and Great Blue Heron, along with a couple of other shorebirds I’d missed on my earlier visit, but it seems the Green Heron had moved on or was in hiding. The Thursday trip was pretty exceptional, however, with the large group of 37 people spotting 40+ species that morning. Included in that total was a small flock of Cedar Waxwings and a few warblers moving through in migration.

In addition to the birds, one person spotted a porcupine perched way up in a cottonwood and most of us got a good look at a coyote likely also looking for the quail we could hear working their way through the brush.

As the group headed through the woods heading for the dam, a couple of people got a quick glimpse of a large bird darting high into the trees and had the impression it might have been an owl. As several of us moved closer trying hard to spot whatever it was, a young Cooper’s Hawk flushed from the ground to a nearby perch and watched us for quite awhile. 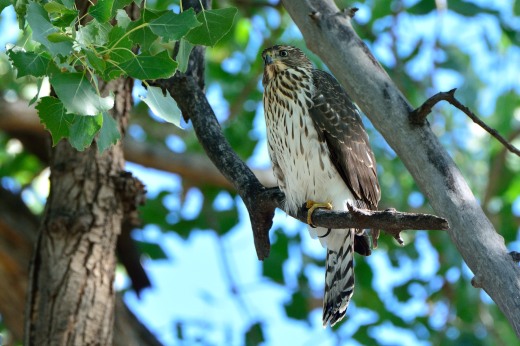 We’d all just about come to the conclusion that must have been the bird we’d been looking for when Rebecca picked out a Great Horned Owl much higher up a few trees away. It sat there well aware of us as everybody in the group got a good look at it.

Bird of the day, for sure, since outside of nesting season these guys can be pretty hard to spot.

Seeing an eBird report that a pair of Great Horned Owls had recently been spotted at Piedras Marcadas Dam, where both the owls and Cooper’s Hawks nested this year, and since I hadn’t been there in awhile either, that was my destination the next morning. Didn’t see either species that morning, but was surprised to see a crazy number of Monarch butterflies working the large expanse of milkweed and sunflowers that had popped up in the area.

While it seems this is the butterfly most people have heard of and often assume is what they see, they really aren’t very common around here and are usually only seen passing through on their Fall migration right about now. I stopped counting after seeing close to twenty of them all over that area. There was even one pair mating up in a cottonwood tree.

Others recently have been reporting an interesting mix of shorebirds showing up at what used to be called the Tramway Wetlands, but is now referred to by the much less classy name North Diversion Channel Outfall. It wasn’t too surprising then to run into several other birders checking it out on Sunday morning. The reports were correct and we were seeing quite a few species that aren’t all that commonly seen around here. For once, I got a pretty good shot of a Lesser Yellowlegs…usually these guys are pretty far away and it’s more typical for me to see the closely related Greater Yellowlegs.

Somewhat hopeless at identifying any of these characters, it was also satisfying to get good shots of some of the Western Sandpipers wandering about.

Since Rebecca shares this butterfly thing and had never been to Piedras Marcadas Dam before, the next day we headed back there to check out all those Monarchs. That morning, we’d count a ridiculous number of 36 individual Monarchs, once seeing a mating pair flying away together and fascinated to watch a female quickly laying eggs on any bit of green she’d land on before heading to the next.

Among all of those Monarchs were also a good number of Queens, Clouded Sulphurs, Checkered Whites, Western Pygmy-Blues, and even an American Snout. While chasing down those butterflies, we also saw a pretty cool looking bug,

and I woke up a rather large toad hiding in the leaf litter.

We next headed for a quick visit to the nearby Piedras Marcadas Canyon unit of the Petroglyph National Monument. After our summer monsoons kick in, the desert canyon becomes lush with green and lots of blooming flowers. We didn’t see many butterflies on that short visit and a longer return visit may be in order, but I did get a pretty good photograph of a Western Pygmy-Blue, probably the smallest butterfly in North America.

Next we headed over to the North Diversion Channel Outfall to check out a few more of those shorebirds I’d seen the day before. Rebecca is way more knowledgeable about those guys than me, and had brought her birding scope and Sibley’s excellent field guide, and we were able to identify quite a few more species. One that even I could identify, but hadn’t been around the day before was an American Avocet probably the first time for me when it wasn’t in its breeding plumage.

A first for me, too, was the Semipalmated Plover that Rebecca pointed out. 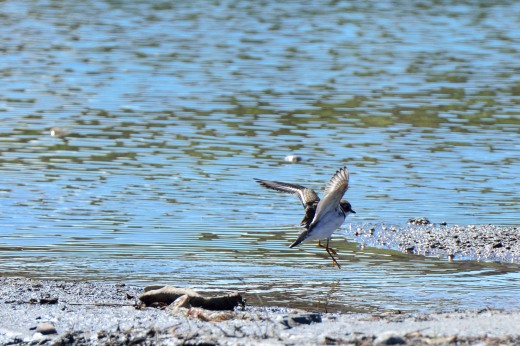 Keeping an eye on us the whole time we were busy scoping the water was a Greater Roadrunner posing proudly.

With the official start of Fall just two weeks away, it’ll be fun to see what other seasonal specialties start showing up.

6 Responses to An Interesting Start to September