Heading into the Fourth of July weekend, the weather here has been a bit warm, but the sunny days have been bringing out a few new butterflies and dragonflies for the year and we’ve even gotten a little taste of rain as we near our summer “monsoon” season. Birds have been a little quiet, it seems, but a few of those caught my eye as well this week. Twice this past week, I stopped by the Open Space Visitor Center where it was good to see their wetland pond has water again. Trees and bushes have grown around the edges of the pond making it difficult to see much, but there were a few birds making their presence known and quite a few dragonflies flitting around. The most common seemed to be these golden ones that I have not been able to quite identify. (Update: 7/8/16 – we think this is probably Western Meadowhawk (Sympetrum occidentale).) 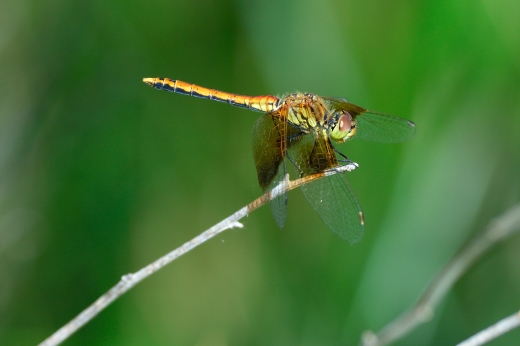 They were quite small, about half as long as most and I’d guess they are either juveniles or females, although there were so many around they are probably juveniles. A return visit in a week or so should resolve that mystery. A few Western Pondhawks and a small number of Twelve-spotted Skimmers were also flying around and I came across a mating pair of what are probably Red Saddlebags. 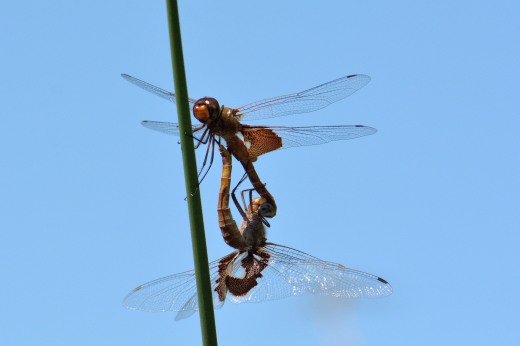 Among the other flowers blooming near the visitor center was a Painted Lady butterfly. Some years we are absolutely inundated with this species, but this year haven’t seen very many at all.

Wednesday morning had me driving around the east mountains checking on a couple of potential butterflying spots including Otero Canyon, Pine Flat, and Oak Flat. Maybe because it was a little early in the morning or still pretty dry out there, but I didn’t see many butterflies (or for that matter, birds). A Western Bluebird seemed to enjoy my dropping by Oak Flat, however, and posed nicely for me.

This week’s Audubon Thursday Birder outing was a successful visit to Valle de Oro NWR in Albuquerque’s South Valley, with the group with an eventual total of 27 people seeing 40 bird species and spotting several nesting birds. I really didn’t get any good bird pictures that day, but got a great shot of this male American Rubyspot someone pointed out to me on the bank of the Rio Grande. 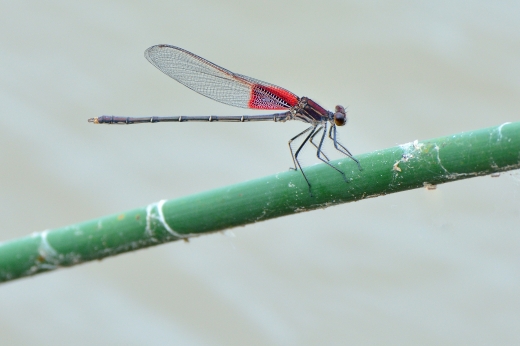 A female, duller in color and more golden than red, perched nearby for almost as good a photo.

Having had such an amazing day of butterflying in the Sandias the previous week, the next day Rebecca and I returned to Capulin Spring and the 8000′ marker to see what was flying, and would return again on Monday to those areas and a couple of others lower on the mountain. The Rocky Mountain penstemon was still in bloom at Capulin and the dogbane much more in bloom than it had been just a week earlier, both of which were attracting lots of butterflies of quite a few species. Among those we’d see at Capulin were a couple of Hoary Comma,

our first Northwestern Fritillary for the year,

and, of course, large numbers of Two-tailed and a couple of Western Tiger Swallowtails. It’s getting to the point that I just have too many pictures of the former, but it’s hard not to take another one.

Also seen that morning was a very cool looking bug, a Giant Ichneumon Wasp – it’s good to know that that long needle-like appendage is just an ovipositor.

Things were hopping down at 8000′ and the large patch of dogbane, too. Highlight of the day was seeing a Behr’s Hairstreak, which we rarely get to see and some years haven’t seen at all.

There were also a surprising number of American Lady butterflies hitting the dogbane, 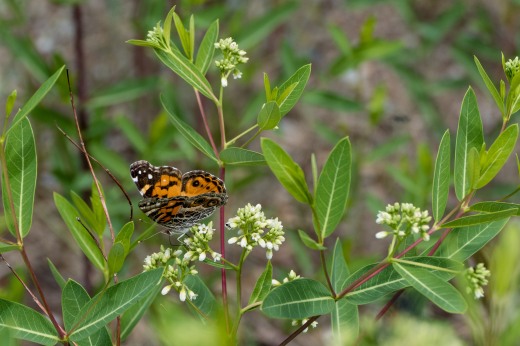 and I was surprised to have a Southern Dogface land right in front of me long enough to get a picture.

While we were poking around in the meadow across the road from the dogbane, we had a couple of Red-naped Sapsuckers fly through, and later would see them again at Bill Spring.

One of those Northwestern Fritillaries, and we’d only see one at each location that day, was incredibly attracted to the bright (Toyota’s “habanero”) color of Rebecca’s car. It was quite entertaining watching it circle around, land repeatedly, and perch for minutes at a time. 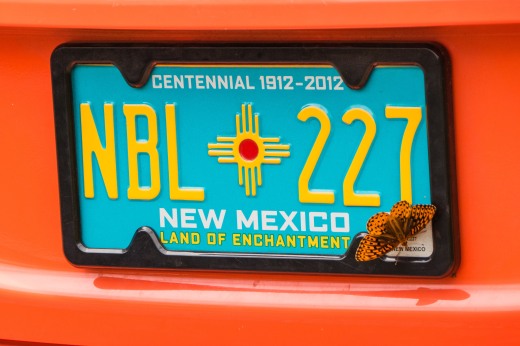 Returning on the 4th of July, the show was about over at Capulin Spring as the penstemon started to fade, but we still had a good variety of butterflies, including this Russet Skipperling, one of a large number we’d see on the spike verbena that day.

Holiday traffic was much heavier than most days and the Forest Service was enforcing their no parking rule, so we had to pass on the 8000′ location and instead headed down to Bill Spring and Sulphur and Cienega Canyons. Bill Spring was a little shady, but there were lots of Marine Blue, several Wiedemyer’s Admiral, and a few other species checking out the damp mud. While we were there, several Red-naped Sapsuckers passed through as did a pair of Pygmy Nuthatches (a bird I don’t see very often).

Near the far parking lot at Cienega Canyon is a small wildflower patch that has had some good butterflies in the past, so we decided to head up there next. Wildflowers hadn’t quite gotten started there yet, but just a little further along was a large patch of sumac in full bloom and attracting large numbers of bees and butterflies. We hadn’t realized sumac was such a butterfly magnet, but will certainly be looking for it in the future. This patch had a ridiculous number of Juniper Hairstreaks nectaring on it, several American Lady butterflies, Marine Blue, Reakirt’s Blue, Hoary Comma, and a highlight for the day Tailed Copper. Unfortunately, it was pretty far away in the middle of the sumac patch and disappeared soon after rather than flying a little closer. 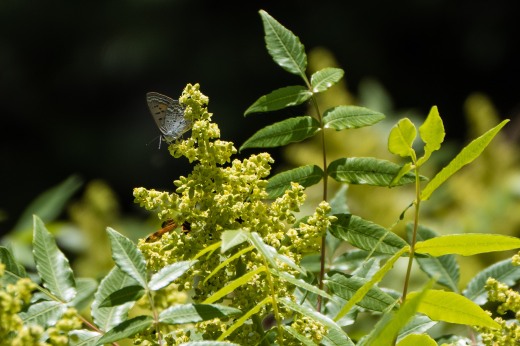 We’ve been starting to see Wood-Nymphs flying this week and would see several that day at different locations. One posed nicely for me on the sumac, which I think is a Small Wood-Nymph.

We usually see both Common and Small Wood-Nymph at this time of year, but it can be a little tricky trying to identify them. The Common usually has two equally large and aligned eyespots on the forewing, while the lower eyespot on the Small is noticeably smaller and a little closer to the edge of the wing. There can be quite a lot of variation among individuals of either species, so there are times you really need a pretty good picture of one to make the call.

Last Sunday it was time for my weekly visit to my Cooper’s Hawk nest near Piedras Marcadas Dam and it was good to see that the two little ones are doing well. Just like my last couple of visits, the one little one was tucked in low in the nest while (I assume) the older one was sitting up and keeping an eye on the neighborhood. And once again, I was a little surprised not to see either of the adults that must be somewhere nearby.

After that, I headed over to Pueblo Montano Open Space near the Bosque School since I hadn’t been there in a few months. A good morning for birding there, starting with a Bewick’s Wren singing as loudly as it possibly could,

a couple of Yellow-breasted Chats finally close enough and out in the open for me to photograph, 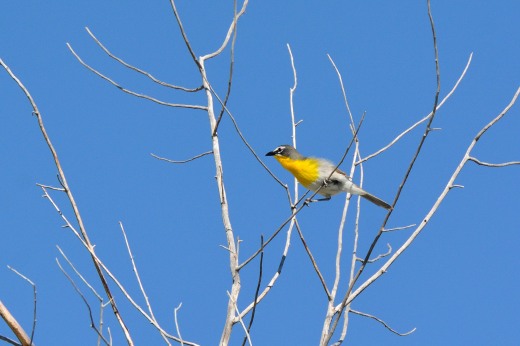 and right at the end as I was heading back to the car, a proud Greater Roadrunner showing off its latest prize. 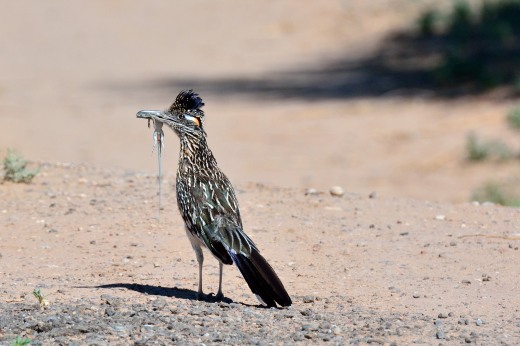 While I watched this male, it started making its cooing call to mark its territory or attract a female when another nearby male responded with its bill rattling call before dashing off through the brush. The first guy then headed into the shade for lunch – it was fascinating watching and listening to this interaction.