Two weeks into May and the weather has been up and down with a couple of cool and cloudy days broken up by a few sunny days with temperatures just getting into the 80’s – wind, as usual, has kicked up a number of times during the week but not to ridiculous levels. Had to start the week with visits to some of the Great Horned Owl nests. At the Albuquerque Academy on my visit Tuesday, the show seems to be over with no sign of the two adults and three little ones anywhere. At the nest near Calabacillas Arroyo, one of the first I’d seen this year, it was surprising they were still around, but right off I spotted this little one clearly starting to get its adult coloration. You’ll also note its sibling there to the left hiding a little better. 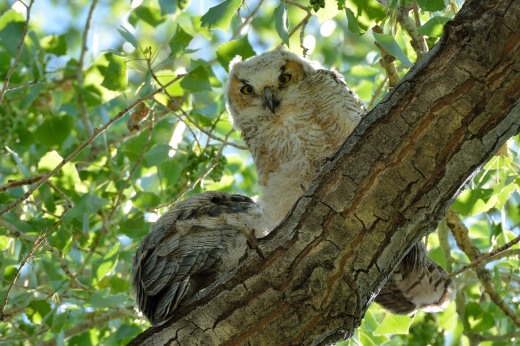 On to Piedras Marcadas, where I’d seen three little ones all peering about but still in the nest on my last visit. This time, I’d easily see the two adults in separate trees – this is the male, I think, 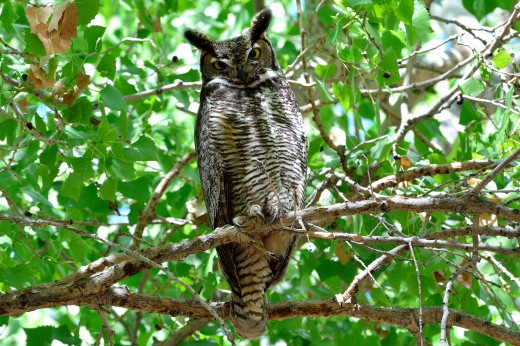 but as hard as I looked, I only spotted a single little one in a tree about as far away from the nest as the adults.

Never did spot the other two, but I bet they’re still around somewhere in the area for at least another week. Also cool to see on that visit was the start of nesting for the Cooper’s Hawks; much like my first spotting of the owls, Mama Cooper was tucked way down in the nest with only a bit of her tail showing.

Last nest on the tour was the one just off Montano Blvd., where on my last visit I finally spotted the male just below the nest where the female and two little ones were hanging out. This time, I didn’t see anybody but one little one pretty well hidden in the nest but looking like it’s still got a couple of weeks to grow before it starts moving out; no idea where the parents were that day. 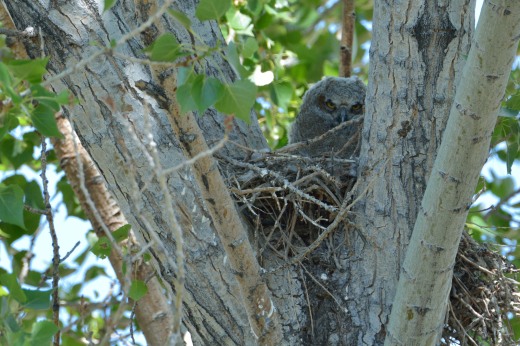 Later that afternoon with the sun still shining and temperatures starting to rise, I stopped by Embudito Canyon to see if any butterflies were out (and unsuccessfully hoping to see that Scott’s Oriole again). There were indeed a few butterflies about, including a Sandia Hairstreak, which we’ve been seeing there since early March.

There also was a Common Checkered-Skipper, which usually perches with its wings open making it a bit unusual to get a good look at the underside. 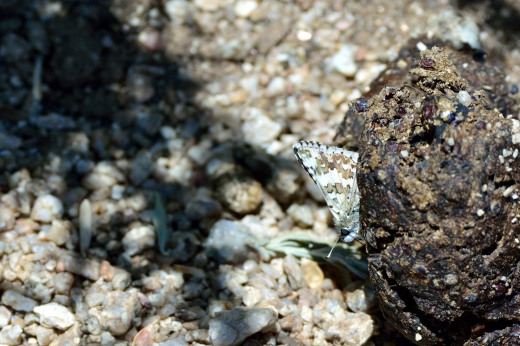 And, new for the year for me, a Common Sootywing.

There were several Checkered Whites flying around, one of which landed long enough for a photograph. 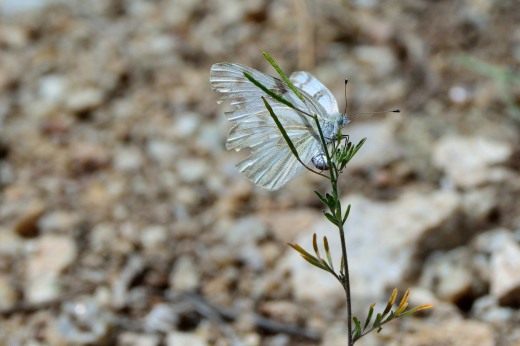 The next day, it was off to Hondo Canyon, a bit of a hike but good for butterflies when the chokecherries are in bloom as we’d expected since our earlier visit back in April. The chokecherries were indeed reaching their peak, but there weren’t quite as many butterflies as I’d expected. One that did show up was a first for the year, the Arizona Sister.

There were a number of duskywings puddling around below the dripping waterfall, most of which were Rocky Mountain Duskywings, but there also were one or two Dreamy Duskywings. 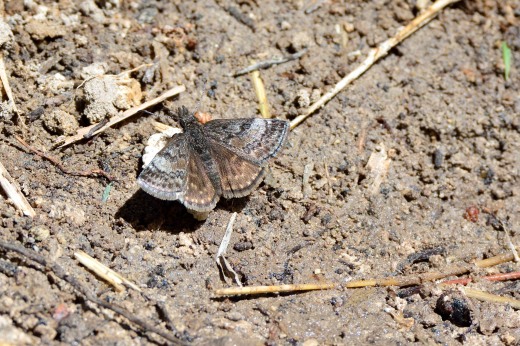 It was fun that day to get close to a Black-headed Grosbeak, a young one I’m guessing since it’s colors aren’t fully developed. 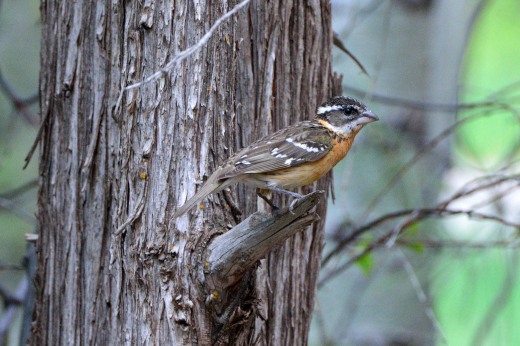 My next stop that day was at Cienega Canyon where I wanted to check on what might be flying in anticipation of the Forest Service’s BioBlitz scheduled for the weekend. My expectations weren’t very high since we usually don’t see much there until later in the season when there are more flowers blooming, so I was a little surprised coming up with about a dozen species that morning, including 3 Southwestern Orangetips (which I’d assumed would’ve been done flying by now), a female Clouded Sulphur which was so white when it was flying I’d assumed was a Checkered White or Spring White until it landed long enough for a closer look. 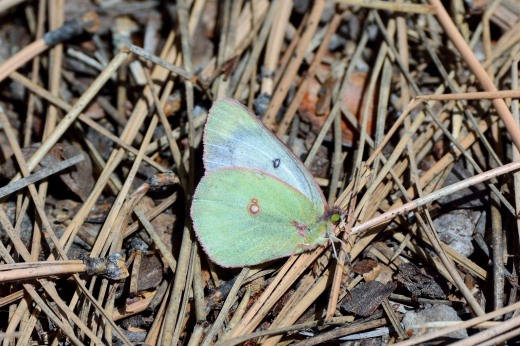 At a damp spot that had lots of duskywings flying around was a very territorial Silver-spotted Skipper. If another butterfly showed up to run it off or I disturbed it by getting too close, it’d fly off only to quickly return to this same perch.

This week’s Audubon Thursday Birders trip took us to Carlito Springs Open Space. Starting out unexpectedly cool and cloudy, eventually it warmed up and the group got a nice variety of birds including several warblers, vireos, and tanagers, but usually just too far for the camera I’d brought along that day. It was fun to see a nesting Violet-green Swallow, but that was about the only picture I’d get.

After the birding trip, Rebecca and I took a quick look at Sulphur Canyon and Bill Spring, locations close to Cienega Canyon’s BioBlitz for Saturday. We’d pick up a few good species on that jaunt, including this Two-tailed Swallowtail, 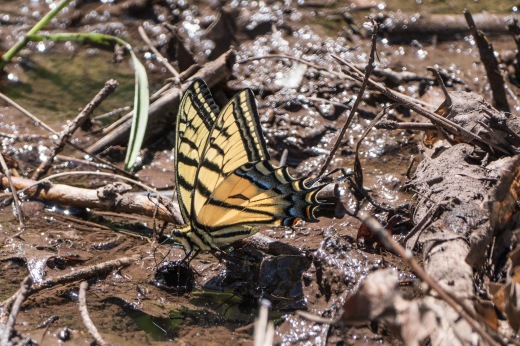 and (new for the season) a Margined White.

Unfortunately, Saturday dawned unusually cold and cloudy and wouldn’t clear up until the afternoon, so we wouldn’t see a single butterfly during the BioBlitz. A fun day, nonetheless, with a good variety of birds being spotted by everybody while we waited for the sun to come out.

The next day, we’d meet up with our friend, Susan, to check out Las Huertas Canyon. A bit warmer than the day before, we caught a little rain and had off and on clouds all morning which kept the butterflies down, and although we didn’t see anything new for the season or the numbers we were hoping for, we ended up with a good list for the day. Things are only going to get better as the days warm up and we move closer to summer.

2 Responses to May Daze