Somehow, I’ve never noticed before how quiet it can get around here in the middle of August. Now that the monsoon season is about over, for the last week or so there has been little wind, few clouds, and mostly pretty warm temperatures. While it rarely gets above 100 F in Albuquerque, mostly because of our mile-high elevation, we do get a week or so like last week with the temperature topping out in the high 90s. And that seems to have the birds keeping cool and quiet hiding in the leaves (except for the little ones constantly calling to be fed) and even the number of butterflies lower than I remember from the past. But still, almost every time I get outside somewhere there is always something interesting or even new to be seen if I’m paying a little attention.

Last week, our Audubon Thursday Birders checked out Cienega Canyon, where our leader, Gale, warned us we’d be lucky to see many birds at all and that she hadn’t seen many on her scouting trips earlier in the week. It was therefore a delightful surprise to tally up the list at the end of the morning and see that once again we’d just barely exceeded our criteria for success of seeing more bird species (24) than we had people (23). Can’t say that I got any good pictures of any of that two dozen species, but did get a couple of pictures of the few butterflies we saw while the birds were hiding. A couple of Arizona Sisters flew by on patrol, but the first butterfly to stop long enough to photograph was a male Checkered White (the female has quite a bit more black markings).

Another one that was flying around that day and that we should start seeing in large numbers all over town anytime now was a Clouded Sulphur. 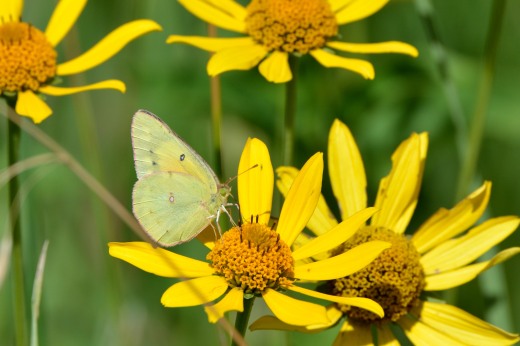 Bees and flies (of various kinds) do seem undeterred by the weather conditions, and it was fun to spot this Asilidae Robber Fly, whose large bright green eyes caught my attention.

Yesterday Elena Gallegos Open Space was one of those slow days. A reasonably long hike around the base of Domingo Baca Canyon only turned up a single butterfly (but a nice fresh Arizona Sister) and very few birds other than several Western Scrub-Jays. But, like almost always, there was one of those special moments when I noticed a little different looking lizard, which I think is a Plateau Fence Lizard.

I may have to run this guy by the New Mexico Herpetological Society since their range map doesn’t show it coming quite this far south.

Interestingly, most of the birds I have seen this week have all been baby birds; they may be young but a couple of them were BIG baby birds, this young Cooper’s Hawk the most striking example and almost full-size. 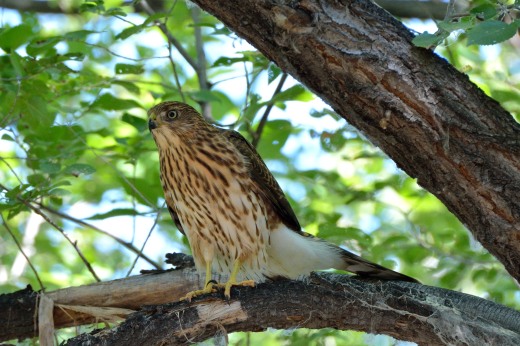 Checked in on those Mississippi Kites again this week and have fingers crossed they’ll still be hanging around for tomorrow’s walk. On Monday, I did see the adults flying over in several different spots in Corrales, and was pleased to find the young ones still in the same area they’ve been all month still calling continuously to be fed.

Tramway Wetlands is about the birdiest place I’ve been recently, a highlight there this week a Spotted Sandpiper. Not sure what that little topknot is about, but it’s in all the pictures I got of this little guy. 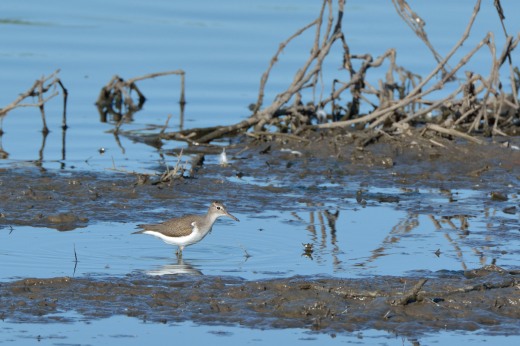 Sunday, I headed up to see what was happening at “the log” at Capulin Springs. A few good birds came in while I was there, mostly immature ones again, such as this Chipping Sparrow,

and a little Dark-eyed Junco. 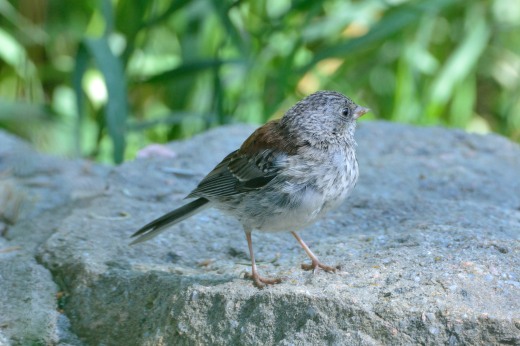 A Red Crossbill and a couple of Mountain Chickadees also stopped by for a quick dip along with an older Yellow-rumped Warbler.

After that I drove all the way up to the Crest, walking to the Kiwanis Meadow thinking it was about time for all the wildflowers to be blooming and maybe there’d be a few more butterflies about. Odd to see only a single butterfly up there, a Taxiles Skipper, but it was interesting to see how popular a puddle in the trail was for several birds, including a Hairy Woodpecker, Red Crossbill, a pair of Mountain Chickadees, and this Red-breasted Nuthatch taking a quick look around before dropping down for a bath.

At one spot in Corrales, where I plan to take the group tomorrow, there was all kinds of commotion when I first arrived on Monday and a good variety of birds fussing about and calling. I’m guessing there must have been an owl or a snake or some other threat nearby responsible for all that activity, but things eventually quieted down and I never did figure out what caused the alarm. A few of the birds that appeared for that event included a Blue Grosbeak, 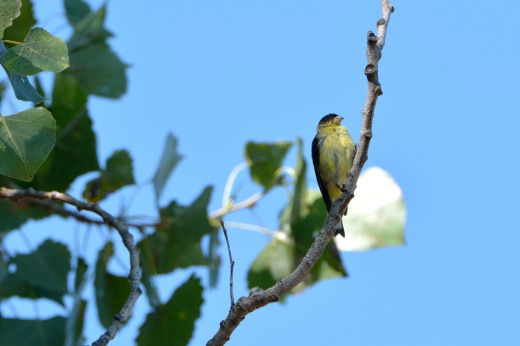 and what I assume by its splotchy coloring is a juvenile Summer Tanager. 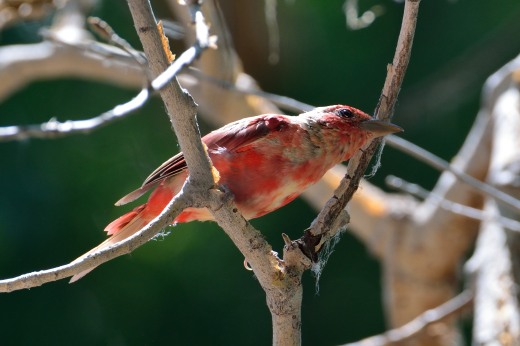 Even if things are a little slow just now, there’s always some surprises waiting out there if you just get out there and keep looking around.