Posted on August 5, 2015 by joeschelling

With all the rain last month, August is turning out to be as green around here as I can remember ever seeing it. That’s brought out a few good butterflies again this past week and, although they seem a bit quieter this time of year, some good bird sightings. The Audubon Thursday Birders last week spent the morning at “the log” at Capulin Springs. With an unusually cool and cloudy morning, there wasn’t too much action at the hollowed out log that usually draws in all the birds in the area for a drink or a quick bath. But with all those eyes looking and carefully scoping the nearby trees, the group totaled almost two dozen bird species that morning. One of the more common ones that day was the Hermit Thrush. 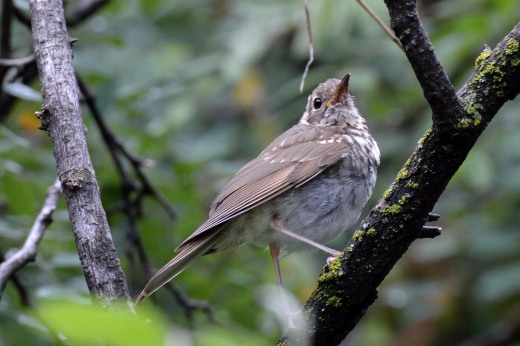 I went back a few days later on a warm sunny morning when the log was working its magic more like it usually does. A nice one to see that day was a Virginia’s Warbler. 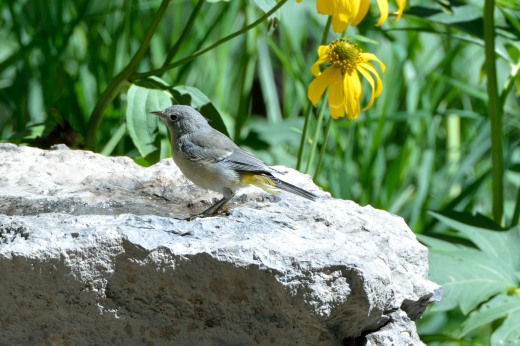 A few minutes later, a small flock of Red Crossbills showed up, at first watching carefully from the trees before coming down to the water. From the coloring, my guess is this is a first-year male, which should turn to an all over brick red as it matures. That bill is amazing and must be just the thing for cracking open pine cones. 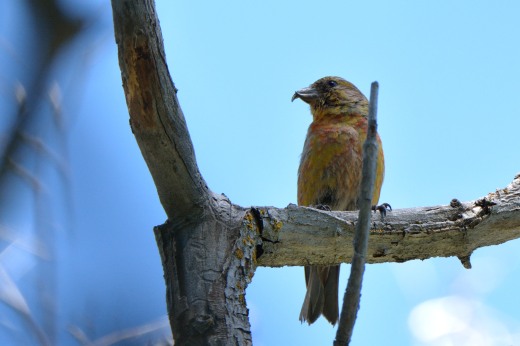 Always present around the log are a couple of these cute guys, the Colorado Chipmunk. 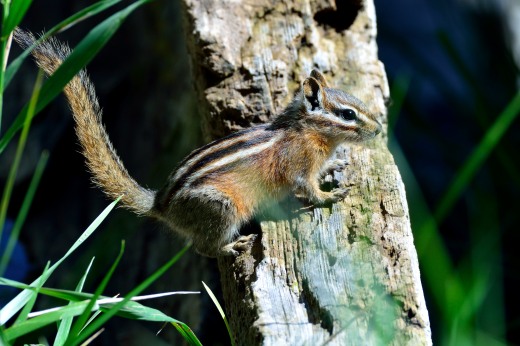 My friend, Kelly, recently posted a ridiculously good picture of a Long-tailed Weasel on her blog along with quite a few birds she’d seen on a trip to Capulin Springs. I’ve been back a couple of times hoping to spot that guy, and can report that Rebecca and I got a quick look at it darting into the bushes on Saturday – enough to tell that’s what it was, but not long enough to get a picture, so I’ll just have to keep looking.

That Saturday outing would turn up a couple of excellent butterfly sightings. We continue to be surprised at how few butterflies are coming to the dogbane at the 8000′ Marker in the Sandias compared to previous years, but the one butterfly we did see there that day was pretty special and one we’ve only seen a few times and usually at much higher elevations, the Milbert’s Tortoiseshell. 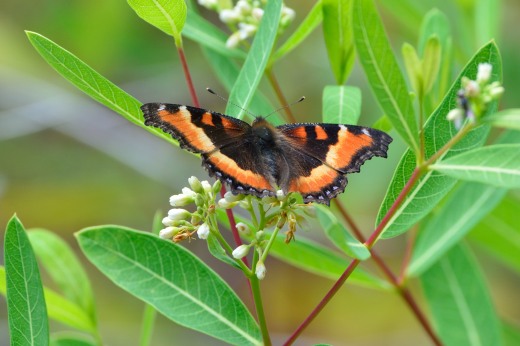 A little later in the day, we made a quick stop at the end of the road in Cienega Canyon where early in June we were surprised to see a Black Swallowtail. This time, a mating pair of Common Wood-Nymphs showed themselves. 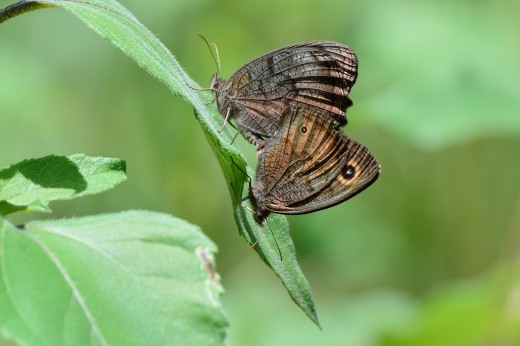 One morning last week, I stopped by the Rio Grande Nature Center to see what birds might be about. As I guess is typical this time of year there weren’t very many making themselves obvious and I only got a few pictures, two of which seemed to have come out pretty good. First was a Bewick’s Wren fussing around in a thicket of branches. 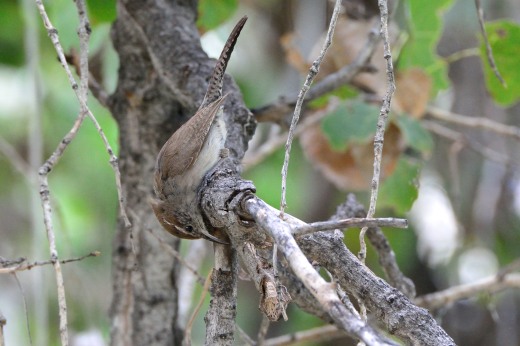 Turning around after getting that picture, a Cooper’s Hawk was sitting on a nearby snag trying to figure out what I was up to. It, too, let me get off a couple of shots before heading off into the woods. 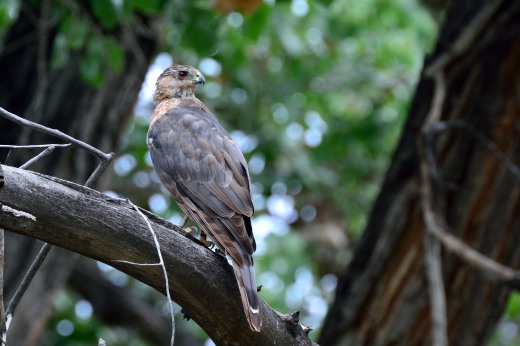 Another morning, a visit to Carlito Springs Open Space seemed to be in order. It only opened to the public last year, and the few times I’d been there before I’d taken the short, but steep, walk from the parking lot up to the springs and the old cabins at the top. This time, I took the trail in the opposite direction. It’s quite a bit longer going that way, but much less steep and has good views across the canyon. Again not very active for birds, but there was one spot on the trail that had several Black-headed Grosbeaks and several other birds making a bit of a commotion. I’d suspect an owl may have been the subject of all the noise but didn’t manage to spot it. A most interesting sighting, however, and one the Thursday Birders had seen a few weeks earlier on their trip to Oak Flat, was a Warbling Vireo feeding a whining immature Brown-headed Cowbird. 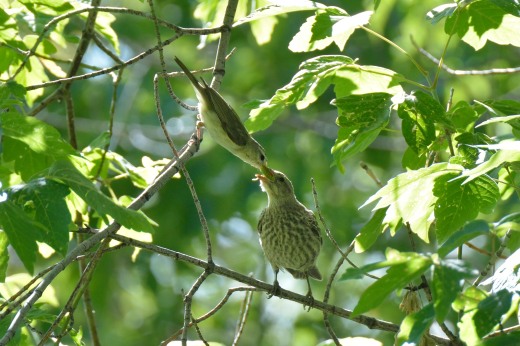 Apparently, female cowbirds don’t use their own nests but leave their eggs in the nests of other species, which then raise the young as their own. Interesting behavior that must require a lot of effort on the part of the foster parents – the little one is already nearly twice the size of the adult vireo.

Quite early on Tuesday morning, I happened to be downtown (rather unusual for me to be out that early let alone downtown) and wondered what might be going on in Owlville at that time of day. Indeed, at 6:30 in the morning the unusually large concentration of Burrowing Owls in the large open field in Los Lunas were all out and catching some early morning sun at four of the nesting sites. 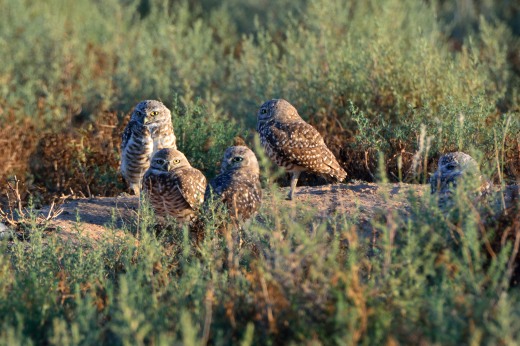 Usually when I see these guys, they regularly swivel their heads around back and forth; this is the first time one’s turned its head sideways for me. 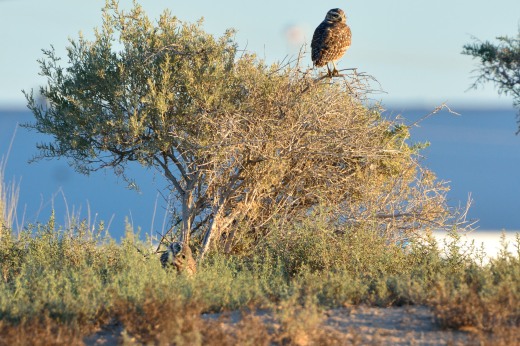 Since it was still pretty early in the morning, I headed back to town to see what was cooking at the Tingley Ponds. Not a minute after getting out of the car a Snowy Egret flushed out from the bank, successfully snatching a fish from what is officially the Catch and Release Pond. I doubt the bird had an official fishing license either! 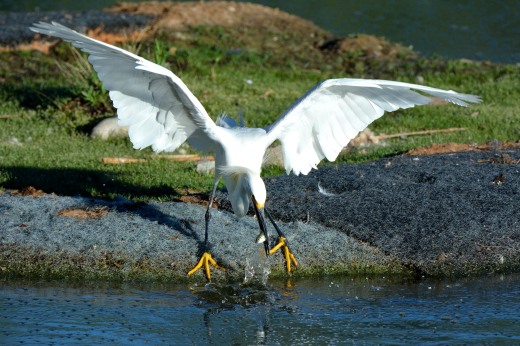 With the disappearance of all the evidence, it strolled rather nonchalantly away from the scene of the crime. 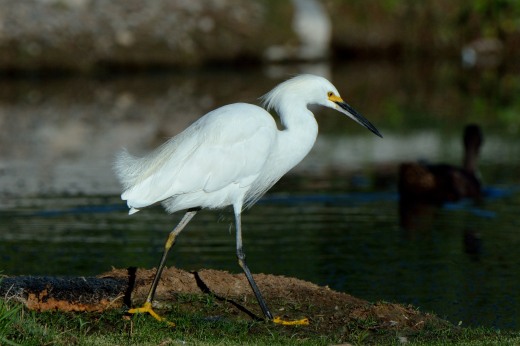 Later, walking around the ponds back in the woods, I’d spot two Green Herons, one of which allowed me to get pretty close for some pictures.

Without disturbing it, I walked a little further down the trail hoping to get another picture with the sun more directly on it. I couldn’t get a great angle on him from there, but like the way the surrounding cattail cover yielded a rather artistic background for the bird. 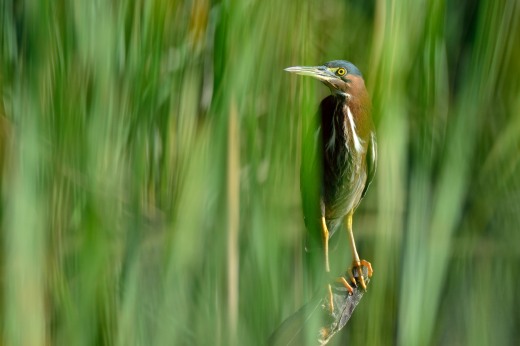