Most of last week had me on the road down to the Davis Mountains State Park and Big Bend National Park in Texas where Rebecca and I met up with our Houston butterflying friend, Steve, in search of some of the specialty butterflies of the area. One in particular, the Poling’s Hairstreak, was one we’d been looking for unsuccessfully over the last few years.  Finally seeing a few just behind the store in the Chisos Basin of Big Bend made the trip a success, but we’d end up seeing close to 50 species overall, including several other new ones for me. Before we took off, I stopped by one of the Great Horned Owl nests and got this picture of one of the adults standing watch while two little ones were looking just about ready to leave for good.

I’ll probably go check up on all of them in the coming week, but imagine the show’s over for this year and they’ll all have disappeared into the woods by now. It will be particularly interesting to see if anything’s happened at Piedras Marcadas, where we’ve yet to see any little ones despite the adult having been on the nest for several months now. Leaving early on Wednesday morning, we arrived at Indian Lodge in Fort Davis by early afternoon, met up with Steve, and immediately started looking for butterflies along a wash through the nearby campground. One of the first we saw was a subspecies of Northern Cloudywing found only in west Texas and distinguished by the frosted appearance on the outside.

Another good butterfly to see there was the Red-spotted Purple, which I’ve only seen a few other times and which we’d at first assumed was just another of the many Pipevine Swallowtails flying in the area. 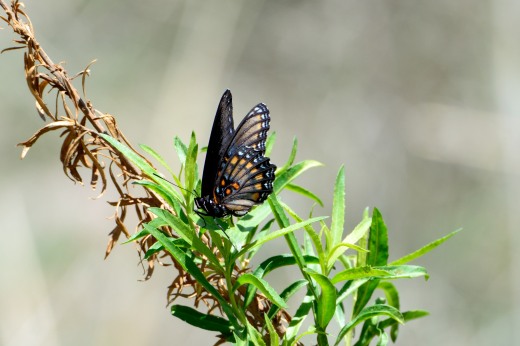 A Lesser Goldfinch returned several times to a slowly leaking faucet, bending over to catch a single drop of water forming on the spout.

We spent a lot of our time in Fort Davis at the nearby Chihuahuan Desert Nature Center and Botanical Gardens, hiking down Modesta Canyon and wandering the gardens. One of the nice finds in the Botanical Gardens was the “Olive” subspecies of the Juniper Hairstreak, which is found throughout most of the eastern U.S. 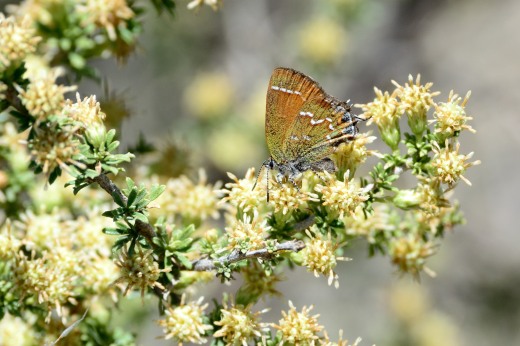 Various cactus species were in bloom in the gardens, including this large showy one that is probably some form of hedgehog cactus.

After two days in Fort Davis, we moved on to the Chisos Mountains Lodge in the Chisos Basin of Big Bend National Park for the next three days. We stopped first at the Panther Junction Visitor Center to check with the rangers for suggestions of places to look for butterflies. Our best bets turned out to be pullouts along the road up to the Chisos Basin through Green Gulch, which we’d visit several times, and a few of the trails leading out from the lodge. A Checkered White posed nicely on a prickly pear cactus bloom in the gardens on the way into the Visitor Center.

It took us a couple of tries, but acting on a tip from our friend, Chris Tenney, who’d seen them several days before we arrived, we spotted several of our target species for the trip, the Poling’s Hairstreak, hiding in the oaks just behind the store. They would sit quietly in the oak leaves until something set one into flight around the top of the tree, which would set the others into action. Three or four would fly around chasing each other for a minute or so before they’d suddenly land and disappear back into the leaves.

Also seen quite frequently every day of the trip was the Gray Hairstreak, most of which were quite fresh and posed nicely for photographs. 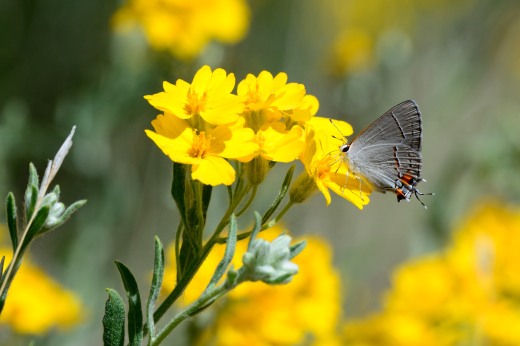 Almost as common during our visit was the Orange Skipperling, which is also fairly common at home but not seen all that often.

Looking out from the balcony the first night of our stay, Rebecca spotted what turned out to be a Gray Fox, the first I’d ever seen, and which we suspect had been getting treats from other visitors despite posted warnings about not feeding wildlife. 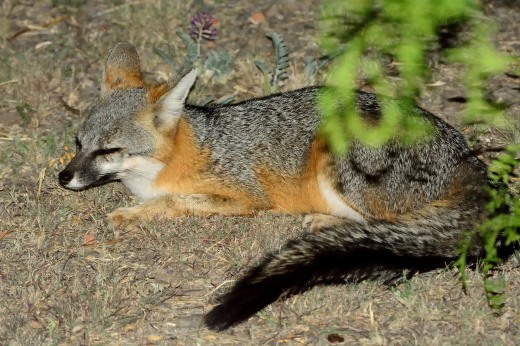 A walk one morning on the Lost Mine Trail didn’t turn up many butterflies, but we did come across a couple of deer calmly browsing near the trail. 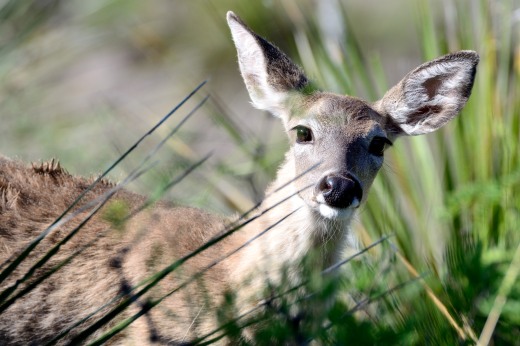 Close to the lodge was a large field of wildflowers which attracted a good variety of butterflies, including some of the numerous Pipevine Swallowtails, one of which paused long enough to photograph.

Although we never saw the very local Chinati Checkerspot we’d hoped to find, during one of our visits to Green Gulch we got great looks at both the Elada Checkerspot

and the Theona Checkerspot.

Another great walk was along the trail to Laguna Meadow, where Rebecca spotted the butterfly that first got me interested in this business, a gorgeous male Great Purple Hairstreak. 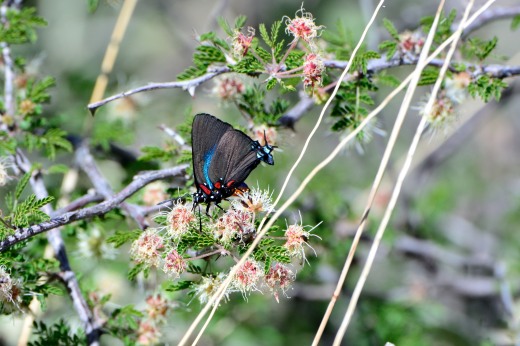 Seen several times in the Chisos Basin and along Green Gulch was Palmer’s Metalmark.

A final treat for me was a Texas Powdered-Skipper, which Steve spotted during our last visit to Green Gulch and was a “lifer” sighting for all of us. Of course, it immediately flew off before the rest of us got to see it, but after a short search of similar flowers along the road, we eventually all got great looks at it.

A long (550 mile) drive home, but with an early start the time seemed to pass quickly and it’s been fun working through the 400+ pictures that made it home with me. The ones shown here and a few more are now online at my website. Road trips are always fun; might just have to take another one soon.