In fits and starts, it seems Spring has finally arrived around here. With a couple of days this week showing up with clouds, a touch of snow on the mountains, a little rain and even unheard-of foggy days, this weekend has returned to sunny warm conditions perfect for being outside and seeing what’s going on. After checking on several reported locations for nesting Great Horned Owls, I finally tracked down a new one this week across the river close to Rio Rancho. Without too many possibilities for where it might be, it turned out to be fairly easy to spot.

Returning a week later with some friends, not only did we see Mom sitting on the nest but looking around the nearby trees, this time spotted Dad keeping an eye on things.

(Click on the picture to zoom in on this guy and those rather serious talons he’s packing.)

One of the clues to where the nest was on the first visit was a pair of noisy Cooper’s Hawks, likely upset at the presence of the owls in their territory or because the owls were using one of their old nests. One of them posed nicely for me before the two of them took off for parts unknown.

Little baby owls should make an appearance any day now, although it’s usually more like April into early May that I’ve seen them before.  The hawks nest a little later in the year, but are probably looking for nesting sites they’ll start building new nests in soon.

After checking on the owls this morning, we drove over to nearby Piedras Marcadas Canyon, the most northerly section of Petroglyph National Monument. My friends had never been there before, so it was fun showing them some of what I consider the best of the petroglyphs in the entire monument. We got pretty good looks at a couple of wrens there, most of whom seemed to have a bit of nesting material in their beaks at one point or another. The most common were Rock Wrens,

but it was a real treat to have a pair of Canyon Wrens busily hopping around the rocks, singing occasionally, and ever now and then pausing in the open for a picture. One hears these birds singing in the dry canyons fairly often, but spotting them is usually a lot harder. 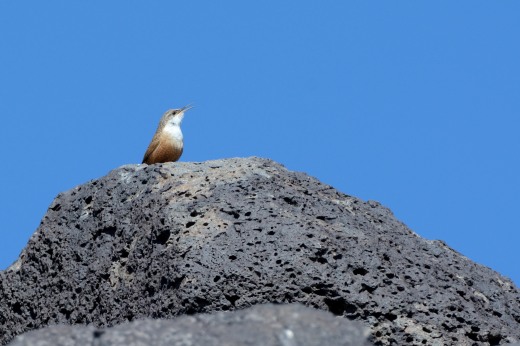 Now that butterflies have started flying around here again, I’ve made almost daily visits to Embudito Canyon to see what’s new there. So far, there have been six species, including a good number of Southwestern Orangetips and an unusually large number of Sandia Hairstreaks, including this mating pair my friend Rebecca spotted there yesterday.

Having missed the last couple of Audubon Thursday Birder outings, it was fun seeing everybody again and joining the group for this week’s trip to the Tingley Ponds. Surprisingly, given the group size that time of 30+, we still met our success criterion of “seeing more birds than we have people” with a total of 37 species by the end of the morning. One of the more unusual sightings for this area was Cinnamon Teal, and more than one!

Wood Ducks were everywhere, with several spotted high in the cottonwoods and others paddling across the ponds.

This next one I think had more on his mind than just showing off his feathers, and shortly afterward the two of them sailed off together.

Near the end of the morning, a Mountain Chickadee was spotted busy harvesting an old wasp nest for food. So intent on its task, our group completely surrounded it and took lots of pictures without it paying any attention to us.

Looks like pretty good weather ahead for the coming week. With the trees starting to flower and just beginning to green up, there should be a few more wildflowers soon, migrating birds showing up, and more butterflies appearing, good omens for spending some quality time outside.