With the weather around here still a little cool and cloudy, the idea of a long weekend trip to Anza-Borrego Desert State Park a couple hours east of San Diego seemed like a pretty good idea. Meeting up with our friend from Houston, Steve, who Rebecca and I had visited a few weeks ago to see the Falcate Orangetip and a few other butterflies, we drove to Borrego Springs in the heart of the huge park for a total of five days. There we met another friend, Frank, who’d been on our Brazil butterfly trip last year. Frank was just amazing, having scouted the area the day before and taking us to all the special butterfly hot spots in the area. Over the course of the trip we’d see close to 30 species, including at least 8 that were ‘lifers’ for me. A surprise for us was seeing a few of the more than 130 large metal sculptures by Richaro Breceda scattered throughout the valley, including this massive dragon that stretches for about 50 yards with the tail popping out of the desert across the highway.

Having had a good rain for two days before our arrival, the wildflowers were at their peak and the butterflies were flying. At Frank’s suggestion, one morning we also managed to spot a herd of the local Peninsular Bighorn Sheep, which apparently are not all that commonly seen. 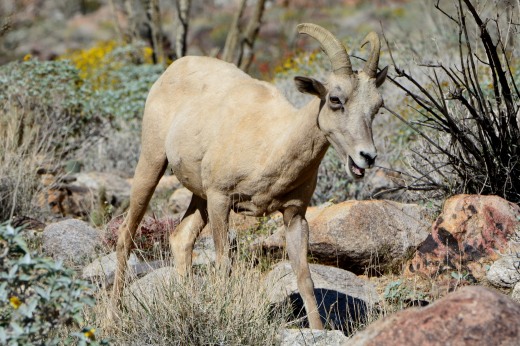 Also running around the Palm Canyon spot where we had the bighorns were a few California Quail, similar to the Gambel’s Quail we see at home. 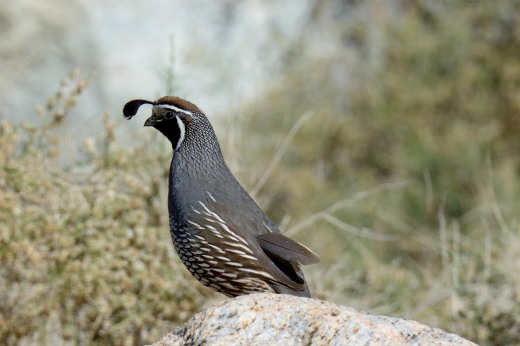 During our time in Anza-Borrego, we’d also see the California Towhee, California Thrasher, quite a few Phainopepla, and a couple of Rock Wrens that insisted on having their photographs taken. 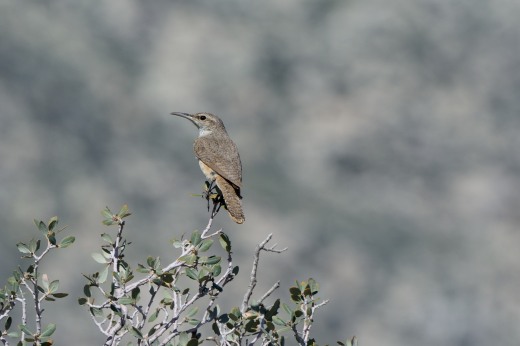 Our main target species for the trip was the Sonoran Blue, a small colorful butterfly that is only found in a limited range along the California coast. One of the best spots to see it is Plum Canyon, where Frank first took us. Without Frank’s willingness to share his knowledge and show us these special places, I seriously doubt we would have been able to find them on our own. Driving in a mile or so and hiking up the canyon for another mile, sure enough we spotted a couple of Sonoran Blues, although they rarely paused long enough to photograph. 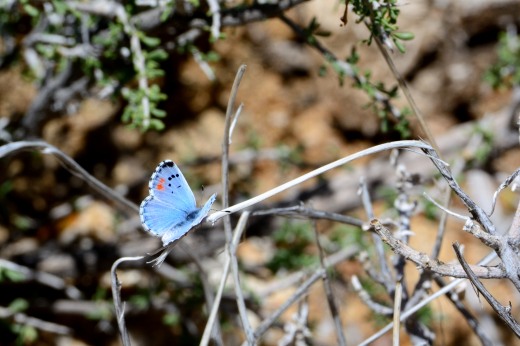 Having snagged that lifer butterfly, the trip would’ve been an unqualified success at that point, but we weren’t close to being finished. Another new one for us, and there were so many around it was incredible, was the California Patch.

Frank also had a couple of special spots for the ‘Loki’ subspecies of the Juniper Hairstreak. We get the ‘Siva’ subspecies in Albuquerque, which is green and brown; the ‘Loki’ has a gorgeous lavender wash on the hindwing.

Metalmarks are always a treat as we only see (rarely) a single species at home. Plum Canyon, however, had quite a few of the ‘Desert’ Mexican Metalmark, 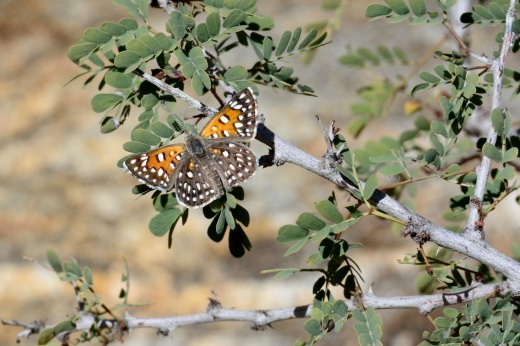 and we had great looks at a Wright’s Metalmark, both of which were new for us. 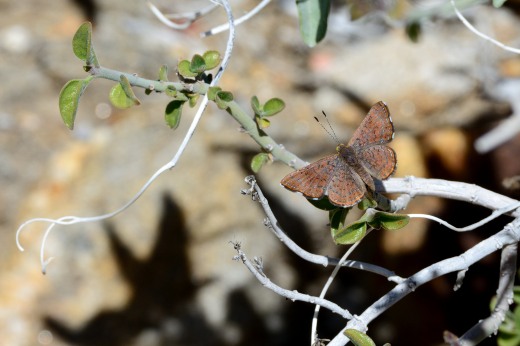 Tiny Checkerspots were also seen in good numbers in Plum Canyon and some of the other spots we visited. 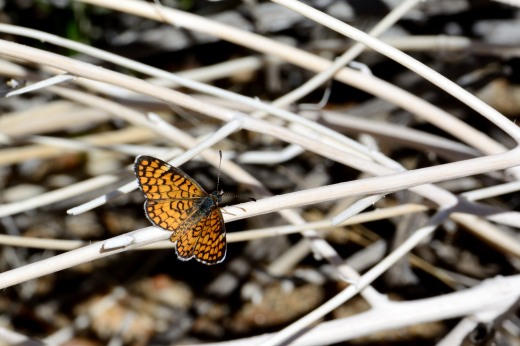 Another great butterflying spot in the park Frank showed us was Culp Valley in the mountains high above the more desert-like environment below. There we added ‘Desert’ Black Swallowtail, Variable ‘Hennei’ Checkerspot, Sleepy Duskywing, and another of our major target species, the Desert Orangetip. We had chased these guys for an hour or so, only having them land very infrequently and usually for less than a second before we finally had a male stop for almost a minute and I was lucky to be in just the right spot to get several good photographs. 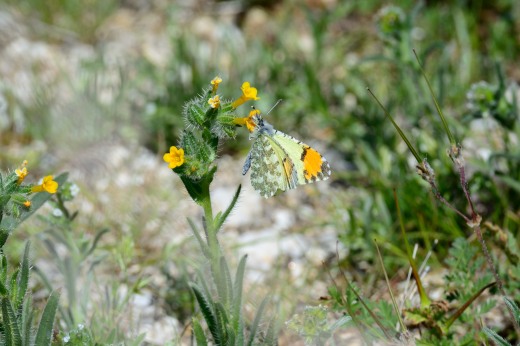 All in all, a most successful and fun trip, raising our expectations for a trip to Big Bend NP in a couple of months.

Back at home before the trip, I did spend a morning looking for the Great Horned Owls known to be nesting south of the Montano Bridge on the west side of the Rio Grande. No luck finding them, but I did have a Bald Eagle soaring over the river that headed right over me. 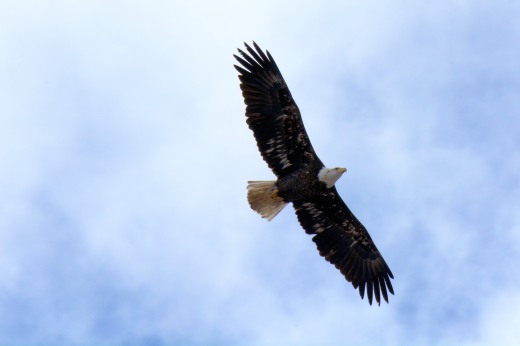 And, yesterday near the same location there were two Great Blue Herons hanging out in the middle of the river. Unlike other places in the country, we usually only occasionally see maybe a single individual staking out its territory, so it was rather unusual to see a pair so close together. 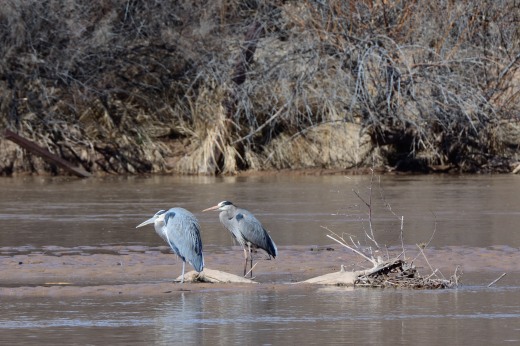 Very few butterflies have been seen around here so far this year (part of the reason for those trips to Houston and San Diego), but the weather has been warming up to near 70 degrees for the last couple days, and expectations were high that butterflies would be flying again soon. Waiting until it got nice and warm in the afternoon, I headed off to Embudito Canyon to take a look. Over the last couple of years, I’ve had about 55 species in the canyon and first to fly are the Sandia Hairstreaks (the New Mexico State Butterfly) and Southwestern Orangetips. Starting at the most dependable spot for the former, which I’d seen unusually early on February 24 last year, there were at least two Sandia Hairstreaks posing in their host Texas Beargrass (Nolina texana).

Further up the canyon, where the creek again has a bit of water were several of the Southwestern Orangetip nectaring on budding willows.

There also were several Mourning Cloaks flying about, which overwinter here but have been strangely absent earlier this year, and a surprising number of Hoary Commas. 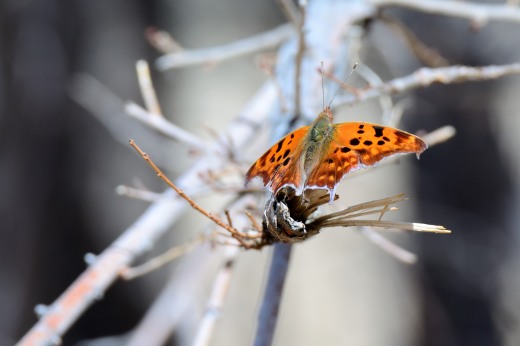 Things are definitely picking up butterfly-wise and the fun is just beginning!

12 Responses to Let the Games Begin