While Boston and the East Coast keep getting slammed by winter, it’s been unseasonably warm and quite spring-like around here for the last week. The butterflies aren’t quite out yet as it’s not that warm, but one or two have been spotted already so that season should be kicking off again soon if the mild weather continues. Last week I ended the post with a picture of the first Great Horned Owl I’d seen this year after spending a couple of weeks looking for them and Bald Eagles all along the Rio Grande. That day must have been the signal to start nesting, since acting on tips from my friend Judy helped me spot two nesting pairs the very next day. The first pair were high in a tall ponderosa on the UNM campus that only gave me a glimpse of the female before spotting the male silhouetted against the sky in a nearby tree. 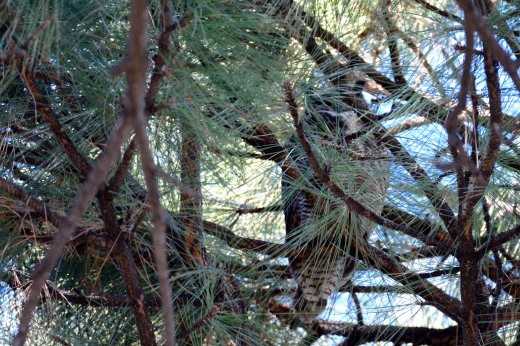 Next was the easily-spotted pair in a leafless tree right next to a trail at the Rio Grande Nature Center. I’d seen a Cooper’s Hawk nesting there two years ago and had checked it for owls several times in the last month, but they hadn’t yet taken up residence. I’d never seen both parents in the nest at the same time before, and returning a couple of days later, what I assume is the male is still staying very close by. Until the leaves appear, they are quite exposed and subject to regular harassment by raucous crows and the occasional Cooper’s Hawk, but seem to be taking it in stride. 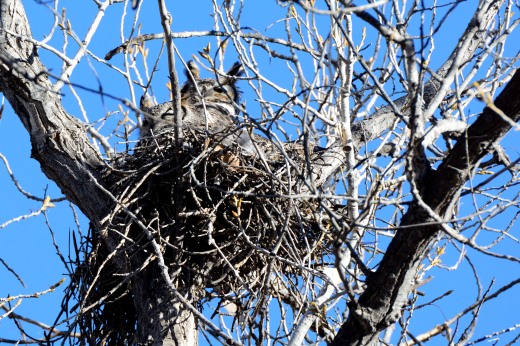 I hope to track down a couple of other nesting pairs in the coming weeks now that it’s clear nesting season is underway.

The Bald Eagles are finally starting to show up again, too. Although we’d seen several down at Bosque del Apache NWR in January, other than one spotted a week ago where the interstate crosses the Rio Grande at Isleta Pueblo, I’d had no luck seeing any in town. But, sure enough, the day after seeing the owls there was a Bald Eagle perched across the river from the Rio Grande Nature Center in a spot I’d seen them before. 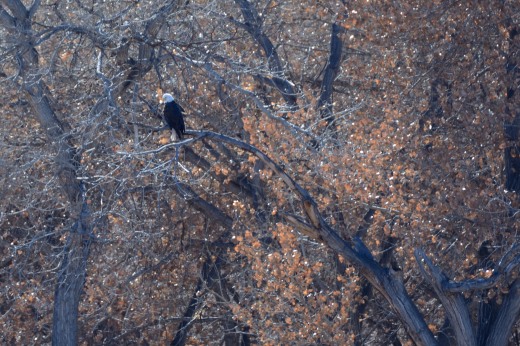 As the week went along, we’d spot others near the Alameda Open Space and several immature ones at Valle de Oro NWR in the South Valley. In years past, I’ve managed to get much closer on a few occasions or observe them snatching fish from the river, so I’ll be out looking some more in the next few weeks before they leave town and head north.

Almost all of the pictures posted here are of birds, butterflies, and other creatures that catch my eye, but last Wednesday’s sunset was too incredible not to photograph. Toward the right side you can see the upper tram tower where the tram is suspended high over a canyon on the way to the top of the Sandias hidden by low clouds that evening. Pretty incredible view from my backyard, no?

and on this week’s Audubon Thursday Birder trip to Calabacillas Arroyo, a small number of Eastern Bluebirds. 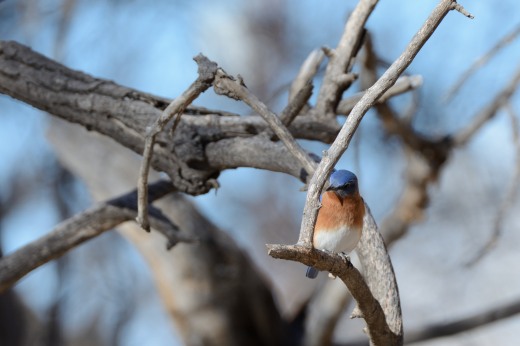 After a rather slow start on what started out as a chilly Thursday morning, the group ended up with a nice total of close to 40 species overall that day. Highlight for me was three or four Brown Creepers busy in one very birdy spot along the trail. We’d seen an unusually large number of them back in December and then none in January, so it was a treat seeing them again and this time they even cooperated by working the sunny side of the trees. Almost always when I’ve seen them before, they’re in the shade and unless highlighted against the sky are tough to photograph since they’re so active and blend right into the color of the bark.

On a day this week unsuccessfully hoping to sneak up on Bald Eagles along the river at several place including the Aldo Leopold Trail near the Rio Grande Nature Center, I did come across a couple of snoozing porcupines (although this one’s got its eye on me), 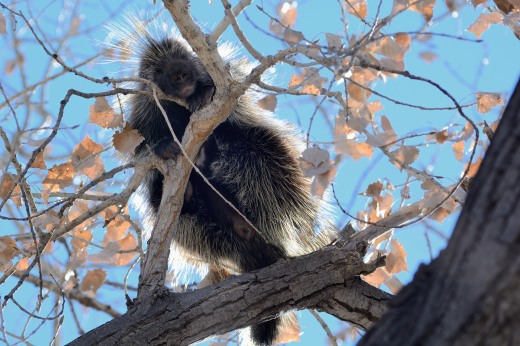 and a Cooper’s Hawk posing proudly in a cottonwood. 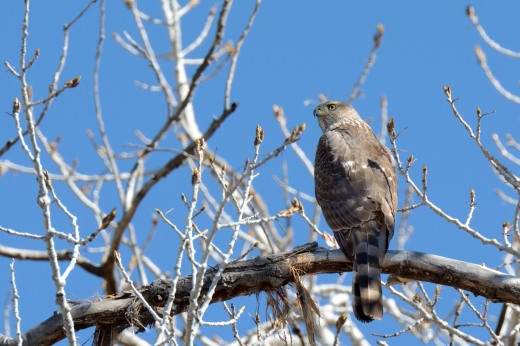 The weather forecast’s looking pretty good for most of the coming week, so I’m looking forward to getting out there and enjoying it.

6 Responses to Warming Up