My last posting mentioned my expecting the imminent arrival of a new camera lens to replace my aging 70-300mm “go to” lens that had been acting up since returning from Peru. Well, just hours after last week’s Audubon Thursday Birder trip to Embudito Canyon (bird-of-the-day a Rufous-crowned Sparrow), FedEx showed up with the new one, an 80-400mm that I’ll be using for most of my pictures in the future. This puppy weighs about twice the old one and is a bit wider but not much longer than the old one. It was also crazy expensive, so my expectations are high.

Armed with my new toy, I headed back to Embudito that afternoon to start playing with it. First bird seen was the Greater Roadrunner the group had seen earlier that morning and it let me get close enough for a couple of pictures, but kept hiding behind bushes so I couldn’t get a decent photo of it. Two pictures from that outing were of a Bushtit, one of a flock that we’d missed on the morning walk,

and a Ladder-backed Woodpecker at a nearby house with several bird feeders.

The next morning, it was off to Tingley Ponds and the Rio Grande Nature Center in hopes of seeing some of the ducks there on my last visit and maybe to spot a Bald Eagle who should be showing up along the Rio Grande. Surprisingly, there were very few ducks to be seen that morning (and no luck on the Bald Eagles), but there were a couple of Northern Pintails and a few mallards and coots on the ponds. One of the male Northern Pintails sailed by so close I had to back off the full zoom and still missed getting the very end of his tail.

Also on the island in the middle of the northern pond was a male Belted Kingfisher calling continuously. Given how far away that guy was, zooming in on this cropped picture gives a pretty good idea of how well this lens performs – I’m liking it!

Saturday, with the weather promising to be just about perfect, Rebecca and I headed down to Bosque del Apache NWR to look for a few birds. We didn’t see nearly as many Snow Geese and Sandhill Cranes as in past years, possibly because of poor crop yield this year, but saw plenty of American Kestrels, Red-tailed Hawks, one Ferruginous Hawk, and at least six Bald Eagles.

A Red-tailed Hawk seemed a bit perturbed by our presence, but perched close to the car before flying just a short distance further up the road.

A couple of the other good birds that day included a White-throated Sparrow at the Visitor Center, a Verdin that sped away before I could photograph it, a very patient Great Blue Heron, and several duck species. A Western Meadowlark posed nicely for its picture, although it refused to turn around to show off that bright yellow breast.

At one spot along the route, there were at least 3 American Kestrels actively hunting for food, hovering in the air before dropping down on unsuspecting victims. At first, it seemed this one had gotten its foot caught in some twigs, but moments later it came up with a good-sized grasshopper. I did wonder, however, if the metal band on the bird’s leg does sometimes get caught like that and if bird band researchers have ever considered that possibility. 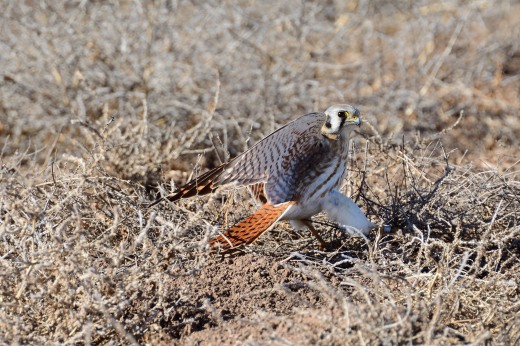 Our last bird of the day was what we really tried to make into the Northern Shrike that had been reported near the Dabbler Deck over the last few weeks. Although it looked a little different than the more common Loggerhead Shrike I’ve seen before (probably because hopes were high for seeing a Northern), we finally decided that the bird we saw that day was indeed a Loggerhead. Most of the pictures on eBird from earlier in the month do show a Northern Shrike with its narrower eye stripe that stops nearer the eye and the faint banding on the breast, but others do look more like this bird. Zooming in on this picture, it’s clear the lower mandible is not pale, which is a good discriminator between these two species. 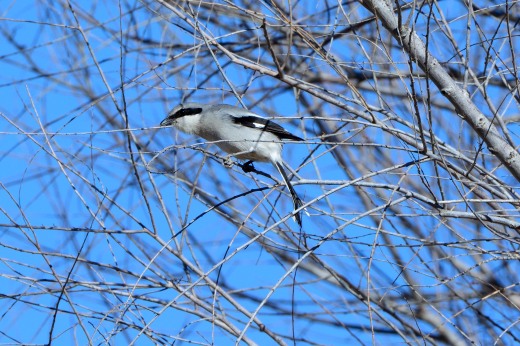 The next day, it was off to Los Poblanos Open Space, where in the past there have been good flocks of Sandhill Cranes, a variety of raptors, and sometimes Western Screech-owls. On that trip and the Bosque trip, I’d hoped to try out the new lens on birds in flight and while a few of the pictures turned out okay, I’ll have to keep an eye out for better opportunities. There were a couple of American Kestrels stirring things up and a Northern Harrier (perched quietly on the ground as a coyote hunted through the dry cornstalks nearby), but the most fun that morning was the pair of Greater Roadrunners that seem to reside near the Rio Grande Community Farm in the northwest corner of the open space. While this one preened for its photograph (in the words of Kim Garwood “wanted to be famous”),

the other one tried to sneak by unobserved and then dashed off, crest raised, when it realized it had also been seen.

All the commotion also flushed a female Ring-necked Pheasant, who exploded into the air before immediately disappearing back into the brush.

Again hoping for the opportunity for birds in flight, and because I hadn’t been there in awhile, the next morning I checked out Valle de Oro NWR in Albuquerque’s South Valley. Other than a few Sandhill Cranes and Snow Geese, it was pretty quiet there that day. In the woods closer to the river were quite a few bluebirds, a couple of Bewick’s Wrens, and a pair of American Kestrels in their usual cottonwood snag. Another American Kestrel caught my eye sitting on a power line as I headed out.

On the way home that day, a quick stop at Embudito gave me a nice look at one of the resident Cactus Wrens singing loudly from its perch atop a cholla.

Yesterday’s outing first took me to the Open Space Visitor Center. Unfortunately, the pond was dry so none of the birds I’d hoped to see there were present. It also is that time of year to start looking in the trees for Great Horned Owls, which should start nesting any day now, and porcupines that are much easier to spot sleeping away the day in the leafless winter trees. I did spot one or two porcupines, but came up empty on the owls so far. The owls have nested in the area the last few years so another visit soon is warranted. Another area that has had nesting owls in the past (actually, they seem to nest all along the river about a half mile apart) is Montano Open Space, my next stop that day. Very few birds were making their presence known that morning other than a Northern Flicker and Hairy Woodpecker, a Bewick’s Wren, and a few Juncos and Mallards, and once again, no luck spotting any owls. Montano is usually pretty popular with porcupines, but I didn’t see more than one or two in the trees this time. What was pretty cool, however, was a porcupine sleeping on the ground that one of the students at nearby Bosque School pointed out to me. It eventually woke up with all my fooling around to give me the eye before dozing back off.

Only the first time I’ve seen one on the ground since my very first porcupine sighting five years ago.

Next week I’m hoping to get over to Alameda Open Space, the Corrales Bosque, maybe Willow Creek Open Space, and other spots along the Rio Grande – those owls have to be there and maybe a Bald Eagle or two will stop by. And sooner or later, I’m going to have some big raptor fly by to test this new lens on.