Autumn has definitely arrived here this week, with the aspen and chamisa in full glow and cooler temperatures and a bit of rain passing through. In celebration of the arrival of Fall, the Audubon Thursday Birders headed out to Fourth of July Campground in the Manzano Mountains, one of the few spots in New Mexico that reminds one of a New England Autumn with the flaming red of some maple trees in among other deciduous trees turning from green to orange and yellow. 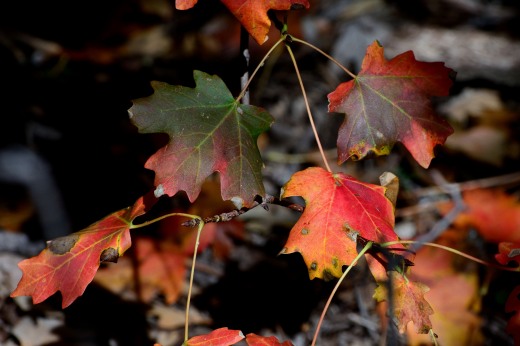 Although it was a little cloudy and cool that morning with a good chance of rain later in the day, we also saw a fair number of butterflies, including this Arizona Sister perched on one of the maple leaves.

It’s been a busy week on the butterfly front, mostly sitting at the computer organizing all the pictures I’ve taken of them over the last few years. For New Mexico butterflies, I’ve set up pages organized chronologically to help me know what species were seen on a particular day and location. Then all the pictures were organized taxonomically by family to group all the pictures of the same species together. That was getting a bit overwhelming, however, as I’d built up quite a few of each species (e.g., 22 pictures of the fabulous Tailed Copper). So this week, I set up the taxonomy page with a first page showing a single picture of each of 153 species I’ve photographed in New Mexico. There are still about 170 species recorded in New Mexico I haven’t yet seen, so I’ll keep looking. With apparently too much time on my hands, I then decided to work on organizing the much larger number of species seen on a number of neotropical trips in Central and South America. These were all posted under each of the individual trips, so the job was to compile them taxonomically with links to the different photographs. The result (1594 images of 388 genera and nearly 700 unique species) is on my new Neotropical Butterflies page.

Several times this week have taken me to Embudito Canyon looking for one of our more interesting-looking butterflies, the American Snout (Libytheana carinenta). Two years ago at about this time, there were huge numbers of them nectaring on the fragrant chamisa blooms and the first I’d seen of them this far north. Oddly, last year, we didn’t see any despite looking specifically for them. I had learned that their host plant is hackberry, of which there is a small stand in the canyon, so this year I’ve been looking closely to see if there are any cocoons. The cocoons look just like old hackberry leaves and the trees are pretty tall, and so far I’ve been unsuccessful in the search for them or the adults. All these visits, however, have added two more species to my list of 55 species seen there since 2011, a Monarch

and the Spring Azure.

The latter is much more commonly seen in the spring, and was a bit of a surprise to see this late in the year, although they are being seen lately in several different locations.

Another new one for the year, also a surprise as usually we’ve seen a fair number of them over the summer was a West Coast Lady, one of three species we get of the Vanessa genus. 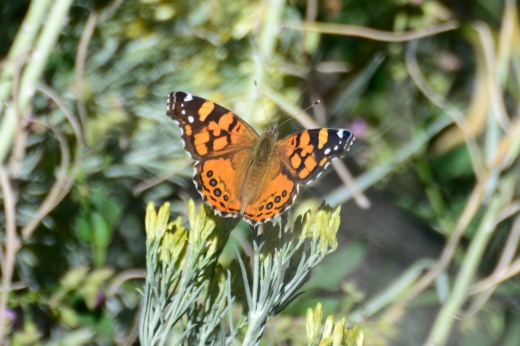 A little tricky to spot and even harder to photograph was a Green Skipper, which I’d originally thought was the similar Pahaska Skipper. The location in a dry wash and the pattern of those white spots helped in the identification of that guy. 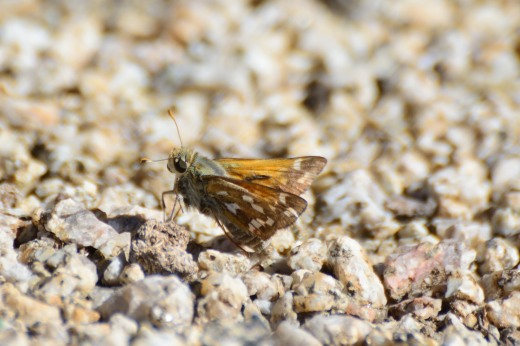 Another unexpected sighting in the canyon this week, and there were at least two of them on several visits, was the Mylitta Crescent,

and I was a little surprised to see the Acmon Blue a couple of times, which has been unusually common here this summer. 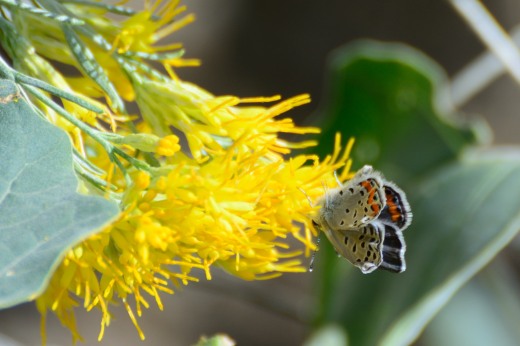 As usual, there were a number of Curve-billed Thrashers flying about, calling loudly, and just begging for me to take their picture (like I don’t have enough pictures of them).

Hearing that the Sandhill Cranes have started arriving at Valle de Oro NWR in Albuquerque’s South Valley, I stopped by for a look earlier this week.  A clear sign that winter is coming, the number of cranes will exponentially increase over the next couple of months and cause for celebration at the annual Festival of the Cranes held at Bosque del Apache NWR held this year on November 18-23. Although I had about a dozen fly over, it was probably too late in the morning and none were in the fields that day. Present in astonishing numbers, however, were clouds of Clouded Sulphur butterflies nectaring on the blooming alfalfa.

Typically, I’ll see one or two butterflies of a given species and sometimes as many as a dozen, so seeing hundreds if not thousands of a single species is quite extraordinary. About the only other butterfly I saw that morning, and not seeing as many this year as in the past was a Common Buckeye.

Butterflies and other insects are closing in on the end of their year as temperatures cool and vegetation dies off, so it was a treat to see how many dragonflies were still buzzing about near the irrigation ditches.  All the ones I saw, and I haven’t seen any since April, were Variegated Meadowhawks, a species common around this time.

The hunt for the American Snout continues – surely any day now they’ll start showing up on the chamisa.