After returning from that week-long trip to Chattanooga and spending the first couple of days unpacking, doing laundry and such and going through all the trip pictures, the next couple of days were spent taking care of a few long-delayed projects around the house. Ever since, though, it’s been a pretty busy week outside looking for birds and butterflies. I did take a break to meet up with the Audubon Thursday Birder bunch at Valle de Oro on June 19 for some good birds, including a line of five immature Swainson’s Hawks perched on a fence line and seeing a Western Wood-Peewee nest high in the cottonwoods. It was also entertaining to try to photograph dragonflies in flight, as there were large numbers of Wandering Gliders flying about chasing each other and sometimes hovering in place. 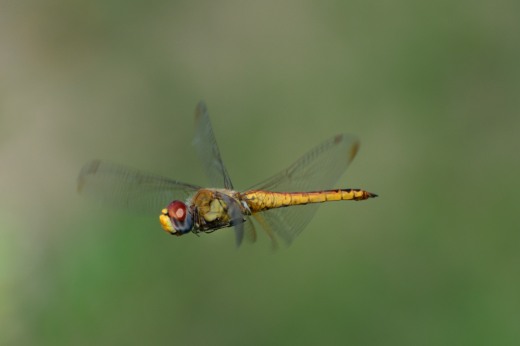 The following Tuesday, I headed down to Tingley Ponds and then Corrales, both places where a variety of dragonflies and damselflies are usually around this time of year, to try for some more pictures. Oddly, the only dragonfly I’d see at Tingley were Widow Skimmers.

Maybe it was a little early in the day at Tingley, and Corrales had a few other species along the ditches including Flame Skimmers and this Aztec Dancer damselfly.

As is usually the case when I go out in search of specific subjects, other events conspire to catch my eye and beg to be photographed. For about ten minutes at Tingley, a pair of American Bullfrogs close to the shore were obviously up to something and so engaged in whatever they were doing that they didn’t pay me any mind. Usually, these guys immediately dive for cover if I get anywhere close, but these two totally ignored me as I got ever closer to the action. At first it seemed like maybe some kind of mating activity, but I think they are both males and this was more of a territorial dispute with the guy on top attempting to dominate the other rather docile one who wasn’t struggling much. They were mostly pretty still but occasionally would dance around each other – most interesting behavior – before  finally diving off after realizing I was probably a bigger threat.

A female Wood Duck and her brood of a dozen little ones also set off across the pond as I went by.

And then as I was headed back to the car to go to Corrales, a Greater Roadrunner was showing off its latest catch in the middle of the parking lot. It had apparently bitten off the lizard’s tail at some point and was having a little trouble manipulating both pieces in its beak, but wasn’t about to leave any of it behind. It would dart a few yards away from me, pause, and then take off again, and once dropped half of its prize before picking it up and proudly heading off to find a place for lunch. 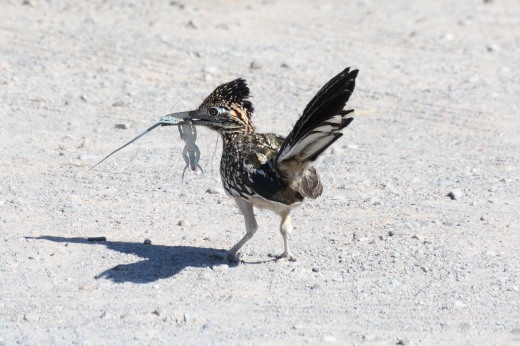 The Audubon Thursday Birders got to visit the Sandia Mountain Natural History Center (SMNHC) in Cedar Crest two days later. Mostly used for school field trips, it is only open to the public a few times a year, and we were fortunate to be able to visit since school’s out for the summer. Good habitat for birds and butterflies, the Center had several good trails into the surrounding area. A highlight of the morning was seeing a Plumbeous Vireo nest with at least four little ones inside. In the shade, it was tough to get decent pictures from any distance away, so I went in closer for a single picture before quickly moving away to hopefully minimize upsetting the adults.

Earlier that morning, the Forest Service issued a notice that the Sandia Ranger District of the Cibola National Forest was going to be closed due to fire danger starting the following Monday, and will remain closed until our monsoon rains come to lower the wildfire threat. Understandable, but not good news since the next few weeks are really the prime butterfly season in the mountains. So plans were made to hit all of our favorite spots over the next four days and hopefully see a few of the butterflies that won’t be accessible until the order is lifted.

After birding the SMNHC (and seeing a nice variety of butterflies there), Rebecca and I headed up toward Sandia Crest to a few of our better butterflying sites. The dogbane at the 8000′ level was just coming into bloom and always attracts good butterflies and would show us our first Northwestern Fritillaries for the year. We worked our way up the mountain and got a few more butterflies, but couldn’t check the very top because of a search and rescue helicopter mission that was going on up there. On the way back down, we checked out Capulin Spring not so much for butterflies as for the birds that frequent the water slowly flowing through a hollow log there. An amazing variety of birds drop by for a quick splash or a drink and it’s always surprising what you’ll see during a visit.  Among the visitors that morning was an adult Plumbeous Vireo

and a male Western Tanager.

While we weren’t there all that long, we also had Red-breasted Nuthatch, Cassin’s Finch, Steller’s Jay, and Audubon’s Warbler drop by. The butterfly puddling area at Bill Spring near Doc Long Picnic Area was busier than we’d ever seen it, with nearly a dozen Weidemeyer’s Admirals, several Arizona Sisters, Western Tiger Swallowtail, Hoary Comma, and Taxiles Skippers about.

The next day, with only 3 days left before they closed the forest, I drove to Las Huertas Canyon, a place that is becoming a favorite for the number and variety of butterflies it hosts during the season. It was great to see that the small patch of Tropical Milkweed was in bloom and had spread over the last two years. We first found it in 2012, missed it last year because of fire restrictions and being off on a trip to Montana, and only had this weekend to see what it might attract. First up was a Gray Hairstreak,

followed by Juniper and Thicket Hairstreaks, two Variegated Fritillaries, Reakirt’s and Marine Blues, and what I think was most likely a Southern Dogface. The whole canyon was filled with butterflies, which is rather unusual for our desert environment, and I’d end the day with 23 species including a first for the year Common Wood-Nymph. At one damp area near the flowing creek, there were more than a dozen species present, including quite a few Two-tailed Swallowtails and a couple of Western Tiger Swallowtails. 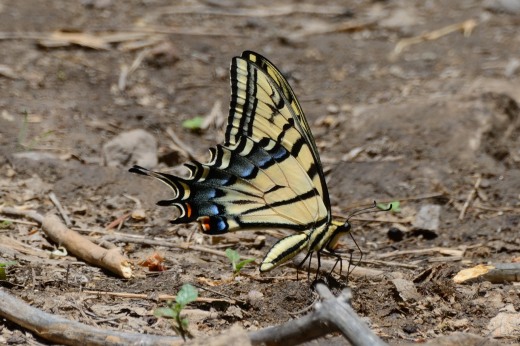 The butterflies were so good, Rebecca would join me on a return trip on Sunday for an even better time and a few more species. The Western Tiger Swallowtail is quite similar to the Two-Tailed Swallowtail, but in addition to the tails, there are a few distinguishing features. From the side, the blue strip seems more continuous on the Western Tiger rather than broken up with more scalloped black edges on the Two-tailed. 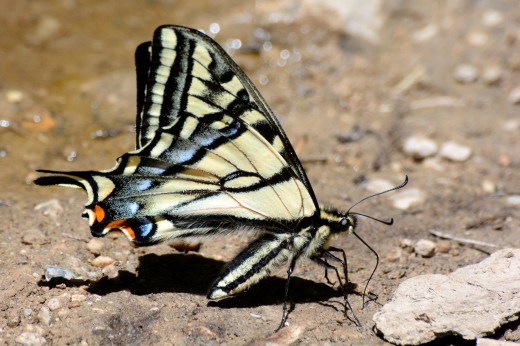 More distinctive, however, is the view from the top where the Western Tiger has much thicker black stripes than the Two-tailed. 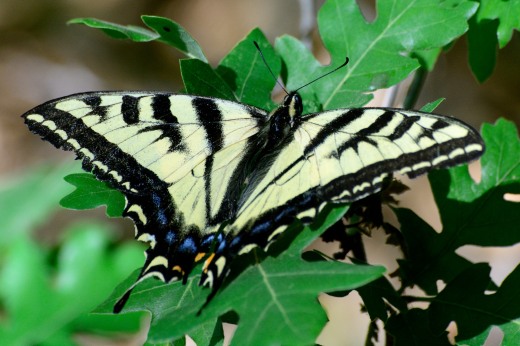 The Sunday trip also added two new species for the year, Margined White and the gorgeous Tailed Copper, the latter a species I’d missed last year and had been hoping to see again just about now.

We’d also get good pictures of a Northwestern Fritillary that dropped in, a species that wouldn’t land long enough for a picture the day before higher up the mountain. This ‘bug’ is spectacular on both sides, and similar to the Great Spangled and Aphrodite Fritillaries we’d seen on the trip back east. 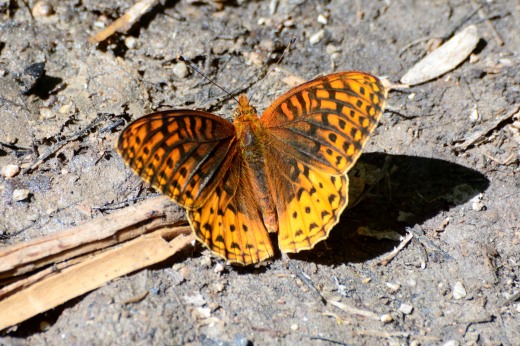 The day before we had headed down to Bosque del Apache NWR to scope out conditions for this week’s Audubon Thursday Birder trip. Lots of baby Scaled Quail were running around near the Visitor Center, and we spotted a pair of Phainopepla on the drive from San Antonio NM. The Visitor Center feeders were busy with Black-chinned Hummingbirds, and the seed feeders were drawing a pair of Black-headed Grosbeaks and a pair of Bullock’s Orioles.

A few areas on the refuge still have water, and although we didn’t see very many ducks, there was a nice variety of other birds around for the summer. Several Blue Grosbeaks were working the roadbed along the drive

and there were a pair of Black Phoebes apparently getting ready to nest near the Flight Deck.

Along the drive, we spotted a few White-faced Ibis and Black-crowned Night Herons along with a few other birds,  and got to spend time photographing a Great Blue Heron busy on the hunt for something to eat that morning.

We’re hoping the rain will show up around here soon so they can open the mountains again, but so far the Rio Grande bosque is still open and there are other places around to visit for birds and butterflies. Our scouting trip to Bosque del Apache also leads us to expect a pretty good trip there later this week.