It’s been two weeks since my last blog update since Rebecca and I were off to the 11th biennial meeting of the North American Butterfly Association in Chattanooga, TN for a week and have been busy going through the trip pictures ever since. A full week of butterflying the wilds there and in the surrounding states of Alabama and Georgia seeing (and photographing) most of the 54 species of the more than 70 the entire group would see and adding 20 new ones to my life list. In addition to the butterflies, there were large numbers of dragonflies and damselflies around, most of which were also new to me, and plenty of other cool things to see. Before the meeting started, we spent two days on pre-trips at two locations in Alabama, one near Tuscaloosa and one near Tuscumbia. Of course, tons of photographs made it home with me. Some of my favorites are shown below in this fairly long posting, with more are on my webpage at http://sandianet.com/chattanooga.

On the first trip to Brent AL near Tuscaloosa, we successfully tracked down the rare and federally endangered Mitchell’s Satyr that has only been seen in a few states and only recently discovered in Alabama.

Another new one for me that day was a Pearly-eye. Of the three species of these, we’d see the Northern and the Creole during the trip.

Our only Zebra Swallowtail of the whole trip was seen that day as well, a fabulous butterfly that reminded me of some in the neotropics and the Tennessee State butterfly.

We had a marvelous time the next day at Crane Creek Canyon Nature Preserve near Tuscumbia AL,  hiking down into the canyon hoping to see another rare butterfly, the Swamp Metalmark. Unfortunately, it wasn’t quite out yet so we didn’t see any, but did add quite a few other butterflies to our trip list. A familiar one from home that we’d see pretty much everywhere that week is the Pearl Crescent.

Other good ones that day were such butterflies as the Northern Pearly-eye and Appalachian Brown, Gemmed Satyr, and Delaware Skipper, all new for me.

One I’d only seen once before, the Little Wood-Satyr, also posed nicely for me that morning.

Near the creek and a large beaver dam, we saw numerous Ebony Jewelwing damselflies, quite striking and different from damselflies I’ve seen in New Mexico.

Every now and then, a bright metallic insect would catch my eye, such as this Six-spotted Tiger Beetle.

During the meeting itself, we were signed up for three of eleven different field trips scheduled for Friday – Sunday, so with a day off on Thursday we checked out some of the other field trip locations on our own. A wise move as we’d pick up several species that we might not have gotten on the official field trips. For example, we happened onto a few other butterfliers who’d spotted several males of the spectacular Diana Fritillary, which were nectaring calmly on a small patch of bee balm.

The state butterfly of Arkansas, the meeting had been scheduled specifically in hopes of seeing these rather uncommon butterflies that had only recently begun flying. We’d hoped to also see the females that emerge slightly later, since this species is very sexually dimorphic and the females are all black with bluish white markings along the outer wing edges. While we were unsuccessful in that quest, the males were quite fresh and others told us that usually by the time the females emerge the males are usually rather worn. 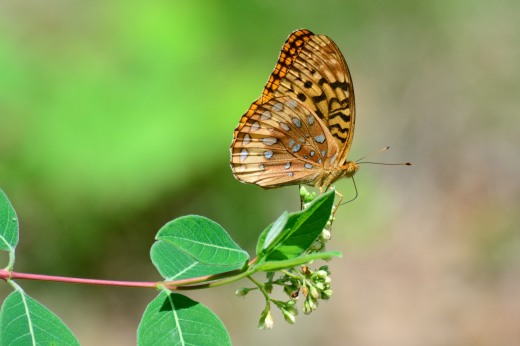 The Aphrodite Fritillary has a much narrower pale band and more emphatic markings.

Friday morning, it was off on the first field trip to May Prairie and Arnold AFB, about an hour away from Chattanooga. Turns out May Prairie was in the same area as the huge Bonnaroo Music Festival, which was kicking off that day. After explaining what we were doing to the State cops and festival security, we were allowed to drive through to the May Prairie Natural Area, where our trip was led by botanist Dennis Horn, author of “Wildflowers of Tennessee, the Ohio Valley and the Southern Appalachians.” Right off, he pointed out a wildflower with a fascinating name, Pipsissewa, also known as Spotted Wintergreen,

and later that day would point out three species of orchids to the group, including this one at our second stop.

With the weather a bit overcast early in the morning, we didn’t see too many butterflies in what was obviously a great location for them, but did spot a pair of mating Eastern Tailed-Blues (another ‘lifer’ for me).

The open grasslands had lots of dragonflies buzzying around; a couple that caught my eye were the Spangled Skimmer, 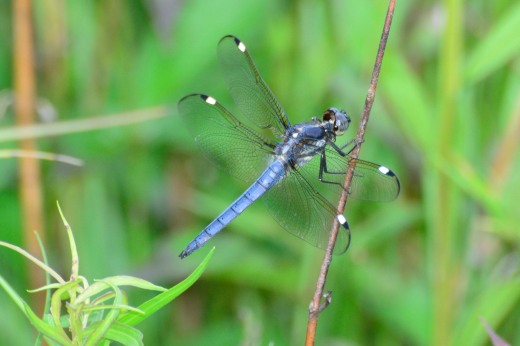 and the Widow Skimmer, which we’d also see at several other locations that week.

In our search for butterflies, several times we spotted insect eggs hidden in the grasses usually on the underside of leaves.

After lunch, we drove to Arnold AFB where we made several stops in search of butterflies and only got stopped once by the Range Officer who was obviously amused by what we were up to before suggesting we not stray too close to the live fire exercise taking place nearby. In addition to lifer Wild Indigo Duskywing, Swarthy Skipper, and Crossline Skipper, we had a very patient Question Mark posing nicely on the gravel parking area. In the same family as the Hoary Comma seen regularly in New Mexico, this species’ name comes from the white comma and period seen on the hindwing.

Saturday, our field trip headed over to Stevenson AL for another batch of good butterflies. An Eastern Tiger Swallowtail, covered in pollen, was seen in Stevenson Park nectaring on the one button bush that was in bloom that day.

At a stop by a rail crossing, Rebecca would spot our first Dion Skipper (lifer!) and I’d see one of my rarely-seen favorites, the Goatweed Leafwing. A small stand of teasel just about to come into bloom was attracting several of the butterflies and other insects, and makes for a fascinating close-up.

A trip favorite for most and not often seen there was an American Copper spotted at our last stop for the day in a large field of tropical milkweed, purple thistle, and Queen Anne’s Lace.

A few dragonflies were also showing off for us that day, including this female Yellow-sided Skimmer.

Our field trip on Sunday took us to Soddy-Davis and Bakewell Mountain, where another spectacular dragonfly was seen, the Calico Pennant.

In a huge meadow filled with the bright orange Tropical Milkweed, we’d see our only Monarch for the trip.

Later that day, we’d get another lifer and one of my target species for the trip, the Hoary Edge, and get good looks at a Common Wood-Nymph, Banded Hairstreak, and those Aphrodite and Great Spangled Fritillaries.

After a great meeting and fun times out looking for butterflies all week with other butterfly enthusiasts, on Monday it was time to head back to the Atlanta airport for the flight home. Along the way, we made a stop shortly after leaving Chattanooga at Cloudland State Park in Georgia. Not too many butterflies, but we did spot a pair of Coral Hairstreaks. We’d seen several of them during the previous week, but this time one let me get close enough to use a macro lens.

With the 20 new butterflies from this trip, I’ve now seen 345 of the 800 butterfly species in the US and Canada listed by Pelham. Nothing to it, but to get out there some more and see if there aren’t a few others I can add to that list.