Posted on January 5, 2014 by joeschelling

After getting reports that an American Dipper had been seen in Corrales a couple days before the Albuquerque Christmas Bird Count back on December 15, I’ve made a number of attempts to find it ever since. A bird I’ve only seen twice before, once nearly 30 years ago in the Jemez Mountains and this past summer on Costilla Creek near Valle Vidal, it’s usually found bobbing up and down on rocks in fast flowing creeks. Seeing it this close to town in a slow-moving drainage ditch in an agricultural setting would be rather unusual. On New Year’s Eve, on one of the nearly dozen visits that we ‘dipped’ (ornithological term for missed) on the Dipper, a couple of us did get spot an Eastern Phoebe, not all that common but seen here fairly regularly in recent years.

While searching the banks diligently for that Dipper, we did spot an odd triangle sitting in the water along the distant shoreline, which would turn out to be a Cooper’s Hawk. As we approached, it first flew up into the nearby trees where it kept a wary eye on us,

and  then vanished into the trees as we came closer. This next picture isn’t that great, since it turned its head as I snapped the picture just as it was about to fly off, but take a look at those talons – surely capable of grabbing even one of those big carp that pass by now and then. 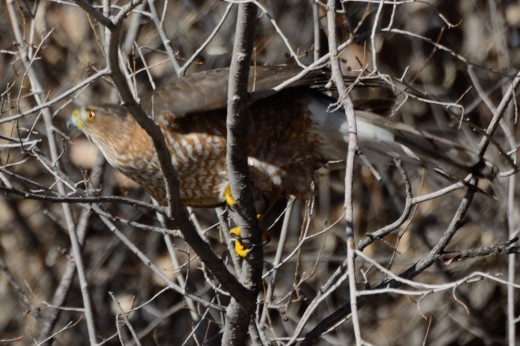 Toward the end of our walk, a couple of Bushtits flew across the ditch to a tree almost too close for my lens.

Dipping on the Dipper that day, I tried again on New Year’s Day. Still no luck, but I would see  a Black Phoebe on that and subsequent visits in pretty much the same place each time.

The next day was my turn to lead the walk for the Audubon Thursday Birders at Tingley Ponds. A surprising number of people showed up for it, and a good way to kick off the new year. Other than a variety of ducks I was hoping we’d see, I didn’t expect many to see many other birds. But by the end of the walk, we tallied 34 species among the 27 people in the group, and our criteria for a good day is that we need to see more birds than people. We did get our Bald Eagle, a couple of Black-crowned Night-Herons, a Great Blue Heron, the rather uncommon Common Goldeneye, and a good number of ducks, a few of which posed rather well for photographs, including this male Wood Duck 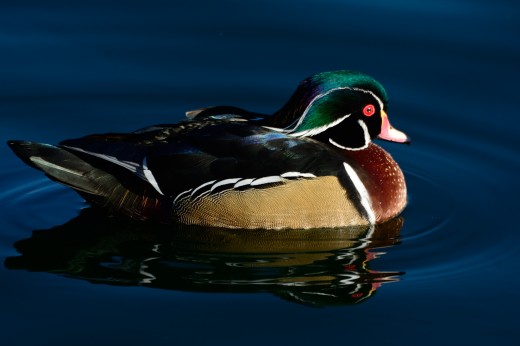 and a male Northern Shoveler.

Back to Corrales again the next day following additional reports that the Dipper was still being seen somewhere along the ditch between East Ella and a little north of Dixon Road.  Mostly Lesser Goldfinches, Dark-eyed Juncos, an occasional White-breasted Nuthatch, and quite a few Song Sparrows around that day as I made my way along the ditch.

I slowly made my way from the bridge just south of East Ella, past the bridge at Dixon, and up to the next bridge, “Duke’s Crossing” at barrel mile marker 3.9, without spotting the bird I’d been told hides out under the branches overhanging the ditch.  Just as I decided to slowly head back the same way and take another look, just past the last bridge I spotted that characteristic bobbing behavior in the shadows on the east side of the ditch. After dipping on that bird on at least a dozen visits, there it was just slowly moving along the shore tossing leaves and other debris in search of something to eat, and didn’t seem the least bit bothered by my hanging around to take a few pictures.

Pleased with my success at finally tracking that guy down, as I was driving home over the Alameda Bridge, I spotted an immature Bald Eagle circling the area (probably eyeing the gulls that have returned to the river there) and pulled over to get a picture.

The next day, I thought I’d head over to Ladera Golf Course where everybody’s been seeing a most unusual Brant among the Canada Geese. A cold and windy morning, the geese were too far off in the distance for me to see if the Brant was still there, so I instead headed off to Pueblo Montano Open Space nearer the Rio Grande to see what might be around. Not many birds there that morning either, but what there was were big ones, leading me to call it my Big Bird Day.  A mature Bald Eagle was perched across the river close to the Nature Center and  a Great Blue Heron took off on my side of the river when I showed up. Walking through the woods, at first I only noticed a couple of porcupines all balled up in the trees. While looking for porcupines, I just happened to focus on what looked at first like an odd branch way up high in a cottonwood. Following up on my suspicions, I took a closer look, and (yay!) that odd branch turned out to be my first Great Horned Owl of the year.

While they probably won’t start nesting for another month or so, it’s got me excited about locating a few more nesting sites along the river and keeping an eye out for signs that nesting season has begun. A great start to a new year!