With Fall well and truly underway around here, a few more birds have started showing up and the last of the butterflies for the season are still flying. For the last several weeks, the number of Sandhill Cranes flying in have been growing at an exponential rate. On Friday morning  with some friends out birding at Valle de Oro NWR, we estimated seeing more than a thousand fly over, with several hundred in the fields and hundreds more flying high in the sky. 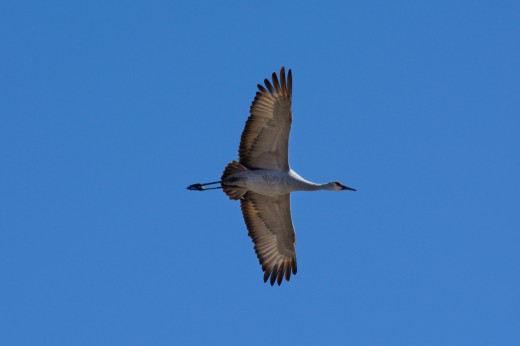 Their numbers will only increase over the next few weeks and should make for another excellent Festival of the Cranes down at Bosque del Apache NWR, which runs from November 19-24.

Yesterday at Tingley Ponds there were a couple of species of ducks that weren’t present a week ago, including the Redhead

and Canvasback (shown below with a few American Wigeon that are also new arrivals this season). 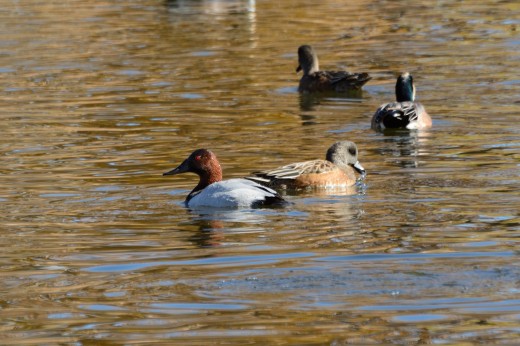 That same morning, I noticed several bright green grasshoppers around, which are unusual in that most of ours seem more cryptic brown or gray.

In my last post, I mentioned that the White-crowned Sparrows that hang around all winter have started appearing, and this week there were even a few immatures popping up.

It’s also been reported this week that the Rosy Finches have returned to Sandia Crest – always a highlight of any winter birding trip to this area.

The Thursday Birders this week picked up a good list of 20 species during the walk at Copper Open Space, including a Cactus Wren and a flock of Scaled Quail, both of which were new for several in the group.

As usual, there were quite a few Curve-billed Thrashers also hanging out in the cholla.

Several in the group also got a nice look at a Common Buckeye butterfly at the end of the walk.

I’ve made several visits to Embudito Canyon this week, and continue to be surprised that there have been no American Snout (Libytheana carinenta) butterflies this year at a time when they were just everywhere last year. Other butterflies are still flying and I had a nice total of ten species in Embudito this morning, including a Queen (#51 for Embudito!)

and a good number of American Lady. 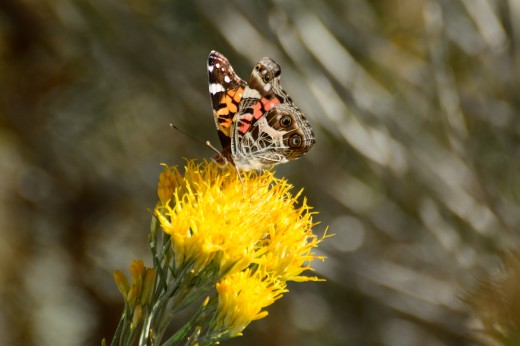 This little guy, who I think is a Texas Antelope Squirrel,

was interesting to observe in a rocky area of Embudito Canyon where I’ve been seeing Rock Wrens lately. In behavior I’ve never seen before, one of those Rock Wrens came and pecked the squirrel, driving it away from where the birds hang out and forcing it to run to the top of that rock.

Since it seems to have been a little slow for birds recently, it’s good to see that all the winter residents are returning, and should be fun to watch as the butterfly season draws to an end for the year.