Just two days from the official start of summer with the summer solstice on Friday, and finally we’ve had a few drops of rain and even a haboob (major dust storm).  Not enough moisture to make a difference, but at least the promise of our ‘monsoon’ rains in the coming month.

Last week, the Audubon Thursday Birder trip headed out for the Perea Nature Trail just before San Isidro and then on to the Paliza Campground near Ponderosa, NM.  Despite the huge Thompson Ridge fire burning a few miles away, the fire restrictions were still low enough that the campground was still accessible and there were several swift flowing creeks, a rarity these days around here.  While the birding group got some good birds that day, there were some good butterflies and dragonflies around as well, prompting Rebecca and I to return the next day to focus on them.  The birds, of course, were still there and I got a picture of the Cordilleran Flycatcher that we’d heard on Thursday but never quite got our binoculars on.

We were successful at spotting a few butterflies, not as many as we’d hoped for but a new one for the year and one we’d only seen briefly once last year – the Northern Crescent.

A new odonate for me was the Emerald Spreadwing spotted in the shadows near one of those creeks. 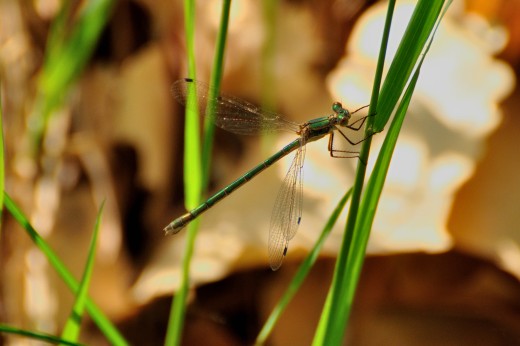 There were also plenty of Bluets and a number of Canyon Rubyspots working the area.

At the Ponderosa reservoir near the campground several species of dragonflies were zooming about, but the only decent picture I got of one was the Flame Skimmer.

Somehow the weekend got away from me and I didn’t get out much, busy resolving my swamp cooler issues (it’s finally working again!), visiting with an old friend I hadn’t seen in years, and a little perplexed about where to go with all the fire restrictions in place around town preventing access to my usual haunts.  A few are still accessible, however, including the Rio Grande Nature Center and the open desert areas like the Petroglyph National Monument and Black Arroyo Dam in Rio Rancho.  At the Nature Center, the Killdeer was nowhere in sight, hopefully after successfully hatching those two remaining eggs in that vulnerable ground nest.  My friend Judy suggested the mystery of the missing other two eggs I mentioned last week can probably be chalked up to the Greater Roadrunner that’s usually seen running around the same parking lot.  It was good to see that the baby Black-chinned Hummingbirds have almost reached adult-size with the two of them barely able to fit in the nest.

And at Black Arroyo Dam, I finally got a peek at two of the four Burrowing Owl owlets.  The parents are quite vigilant and quick to sound the alarm when people appear, sending the little ones scurrying for the burrow.  I got this picture just as one of the adults flew in kicking up dust with one of the little ones already diving for cover while the other just stood there looking confused at all the commotion. 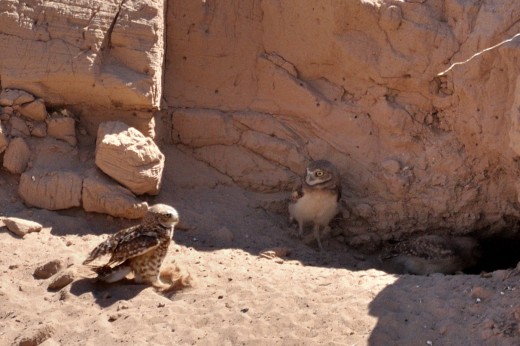 Obviously, these little owls are getting pretty grown up, too, and are now almost as large as the adults.

Another good place to go these days is the Albuquerque Botanic Garden, where the flowers are in full bloom and various creatures are about in the trees and ponds.  Installed last year is a small Dragonfly Pond that was quite busy this week, and allowed me to get a picture of a colorful Twelve-spotted Skimmer,

and one of several frogs patiently waiting to grab a snack.

A highlight for me is always a visit to the PNM Butterfly Pavilion, an enclosed space filled with a variety of butterflies habituated to people to allow easy photography. (It can get pretty busy in there with all the baby strollers and schoolkids running around, but if it’s early enough that’s not usually a problem.)  This year, they’ve added some new Asian species along with different species of neotropical and temperate butterflies.  Among those new Asian species for me is the Emerald Swallowtail (this one’s a little beat up but you get the idea),

and the Malay Lacewing.

Back again for another season, also from Asia, is the Paper Kite.

Always a favorite and a marvel to see on any trip to the Neotropics is one of the species of Morpho, generally seen as a bright blue flash floating away through the trees and nearly impossible to photograph in flight.

In addition to several species resident in New Mexico, there are also a few that are sometimes seen in other parts of the US, including the Spicebush Swallowtail

and the Julia (Google and Wikipedia don’t say if this is in any way related to the Orange Julius beverage concession.).

It pays to circle the pavilion several times, to sit patiently,  and to keep looking closely to spot some of the more furtive species hiding in plain sight, such as this tiny Atala Hairstreak found in Florida and the Caribbean.

I don’t know if anyone notices the flag counter down at the end of these posts, but it was fun to see that visitors from 67 different countries have visited my blog since it was added late in January. At long last, visitors from New Hampshire and South Dakota have dropped by making a clean sweep of all of the United States.  It’s good to know people are actually looking at it and hopefully you’re enjoying it as much as I enjoy putting it together.