On the Road Again

It was a sunny but chilly morning with the Audubon Thursday Birders at the Alameda Open Space last week with some pretty good birds, including large flocks of Barn, Cliff, and Violet-Green Swallows, a tree full of American Goldfinches, 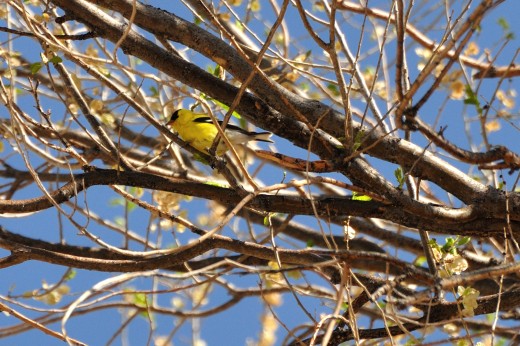 Franklin’s Gulls, and even an Osprey and Eastern Phoebe after we’d wrapped up for the morning.

The next morning it was off again on another long weekend road trip in search of some new butterflies in the area of Silver City NM and Springerville AZ. During the four-day trip, we’d end up with 26 species of butterflies, including two ‘lifers’ and a new one for my New Mexico state list, and pick up a few good birds while we were at it.  As dry as it’s been this winter and the fickle weather keeping temperatures a little cool and breezy, spotting butterflies was a bit difficult at times, but getting those new ones made for a successful and fun trip.

Our first stop was Railroad Canyon just past Emory Pass in the Gila National Forest, which we’d first been introduced to by local expert Elaine Halbedel last year. A butterfly that’s always fun to see and unmistakable in the right light is the Southern Dogface, with this one showing that puppy profile quite well.

While we were in Railroad Canyon, we’d also see two Arizona Hairstreaks (Erora quaderna), a butterfly I’d first seen on the road trip to Tucson a couple of weeks ago, but this was a first for me in New Mexico. There were quite a few Duskywing and Spring White butterflies about that day and about a dozen other species, including the Morrison’s Skipper (Stinga morrisoni) that we’d seen for the first time last year.  Just as we were about to give up for the day, Rebecca noticed this large moth-like insect zooming by and somehow guessed it was a Yucca Giant-Skipper, one of our target butterflies (and the first lifer!) for the trip.  Fortunately, it would land for about a minute before zipping away only to come right back to the same area, so we were able to get decent pictures and identify it for certain.

The next morning, it was off to the Gila River Bird Management Area where Elaine had also shown us some good butterflies last year.  As we pulled into the canyon, we spotted a Common Black-Hawk, which nests in this area but isn’t seen very often further north.

After it flew off its perch, it was back to butterflying but after several hours it was surprising how few butterflies of any kind we saw there that morning.  A very small patch of some kind of vetch we spotted on the way out finally seemed to attract a few butterflies, including a Pipevine Swallowtail, Common Streaky-Skipper, and an Acmon Blue. 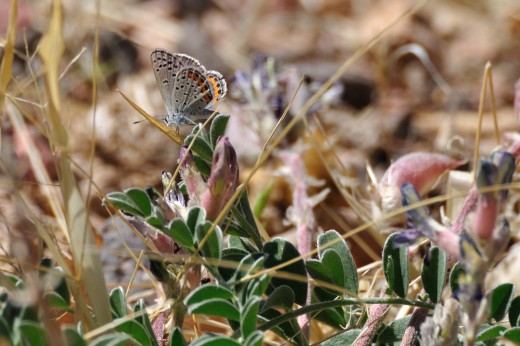 We’d stopped earlier that morning on the way from Silver City at another spot Elaine showed us last year, Mangas Springs, but it had still been too chilly then, so we decided to check it out again on the way back after things had warmed up. Skulking around in the roadside cattails was a Marsh Wren, which is usually easy enough to hear but impossible to see let alone photograph, but this time one popped up just long enough for a decent picture.

Still pretty quiet for butterflies, we did get a Mylitta Crescent, the first for the year, perched on those dried cattails.

Highlight of our time there, however, and maybe for the whole trip, was Rebecca spotting a tiny, non-descript butterfly sunning itself on a small area of damp mud by the side of the road.  Luckily, it stayed there long enough for a closer examination and a few pictures, because it would turn out to be a Carus Skipper, our second life butterfly for the trip and one that is rare to uncommon in its rather restricted range. 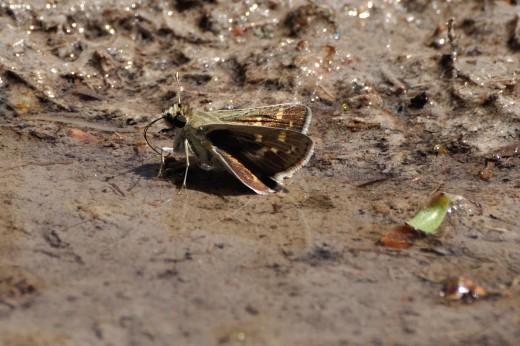 Getting a life butterfly two days in a row is pretty rare, too, so it was a good day.  Later that afternoon, we headed back into the mountains where butterfly activity had been higher the day before, and found a few at Cherry Creek and McMillan Campgrounds.  A single flowering cherry tree at one of those stops attracted a variety of butterflies and other insects, including a Two-tailed Swallowtail,

a White-lined Sphinx Moth, sometimes called a Hummingbird Moth for its fast wingbeat and hovering behavior, 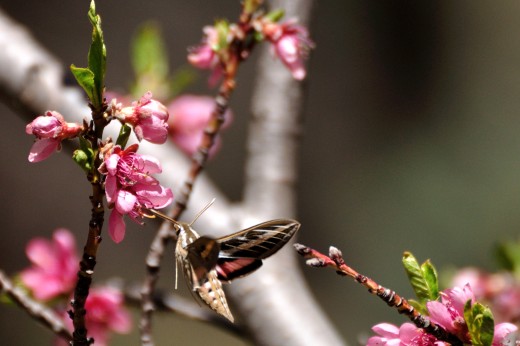 and a Snowberry Clearwing, another type of sphinx moth that looks like some sort of bumblebee.

In a nearby pine, Rebecca heard the call of a Red-faced Warbler, always a treat to see and usually present at this location in the spring.  We managed to get a few good looks at it, although it was pretty high up and doing its warbler thing of rapidly moving from one spot to another.

Throughout the trip, we’d see a few Hoary Commas, although most were just passing through and rarely stopped long enough for a photograph.

The next morning, we headed off toward Springerville AZ, where nearby Green’s Peak Road is well-known as a good butterfly spot in the summer.  With this weird spring weather (it snowed there last week!) there wasn’t much action, but could be great for butterflies in a couple of months.  Along the way, we stopped at Luna Lake just outside Alpine AZ where we’d gotten some great looks at Nokomis Fritillary last Fall.  Again, not much butterfly action going on, but there were quite a few ducks and other waterbirds out on the lake, including about a dozen Eared Grebes in their summer plumage who came quite close to shore and didn’t seem bothered at all by our presence, quite unusual in my experience of seeing most grebes at some distance. 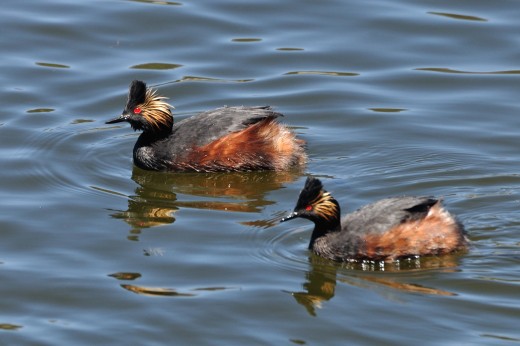 On Green’s Peak Road, a Ferruginous Hawk was perched on the ground rather than up on its usual power pole, taking off as we stopped to watch. 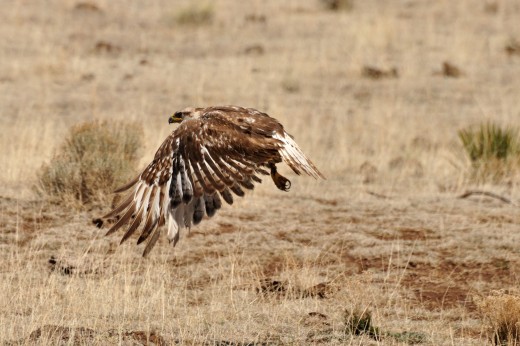 With not much going on butterfly-wise and the wind starting to pick up, we headed back to Springerville, stopping at Becker Lake along the way for a picnic lunch.  After lunch, we took a short hike along the lake to check out a couple of large nests in some of the few trees around.  Turned out to be raven nests, but we did spot a couple of Bald Eagles in a distant tree and a large flock of Yellow-headed Blackbirds, who apparently took offense at a flyover by a Black-crowned Night-Heron that flushed from the reeds.

A Yellow-rumped Warbler also posed nicely for a picture that afternoon, and the picture turned out surprisingly well considering that my camera dial had been inadvertently switched to manual exposure and no telling what those settings were.

The next morning, the wind continued to build as we headed for home but we stopped for a look at the La Ventana natural arch in the BLM’s El Malpais National Conservation Area near Grants NM. No butterflies there, either, but a large flock of pinyon jays sailed by, a few swifts were flying about and there were unquestionably fabulous landscapes to view.

4 Responses to On the Road Again