Posted on September 20, 2012 by joeschelling

Autumn arrives on Saturday and it’s been a little quiet around here this past week for both birds and butterflies, but there are still a few surprises around.  Last week’s Thursday Birder trip to Bosque del Apache with a stop for a few of us at Belen Marsh started off a bit cloudy and wet but we ended the day with a surprisingly large total of more than 50 species.  At the Bosque a couple of the more interesting sightings were a flock of White Pelicans on the Boardwalk Pond and quite a few Wild Turkeys running around in the woods.  For this late in the season, the Belen Marsh surprised us first by still having a Burrowing Owl in the area and seeing a pair of juvenile Sabine’s Gulls, which are rather uncommon around here and mostly spend their time nesting in the Arctic or migrating along ocean shorelines.

This week, the group hiked a short way up the La Luz trail in the Sandia foothills, and although a gorgeous morning, very few birds were seen or heard.  With all those eyes and ears paying attention, however, we did total about a dozen species.

Saturday, Rebecca and I initiated our search for the Apache Skipper (Hesperia woodgatei), which it appears I’d gotten a picture of last year in Embudito Canyon but she had not yet seen.  Not all that common around here (or anywhere for that matter), this is the time of year for looking for them.  We didn’t see much of anything in Embudito but thought we might have gotten an Apache on a butterfly bush in a nearby yard, but are pretty sure now it was the related Green Skipper (Hesperia viridis).  Not many butterflies flying on the east side of the Sandias, either, but I did get a nice picture of a pair of mule deer browsing by the road. 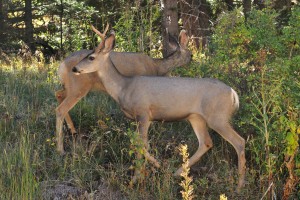 Highlight of the day butterfly-wise was a single Hoary Comma we spotted at Balsam Glade.  These guys are really fun to see – usually, they blend right in with the leaf litter or on a tree branch with their wings closed (if you zoom in on the picture, you’ll see that small white ‘comma’ on the hindwing that gives them their common name), 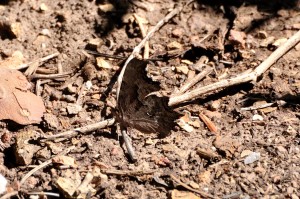 but every now and then will open those wings to show the stunning color and markings on their upper surface.

I spent a little time this week looking in a few other spots for that Apache Skipper, but with the drought there wasn’t much blooming and the perennial streams in Embudito and Embudo Canyons were dried up and not very productive.  With the cooler weather coming, the asters and chamisa should start blooming soon and hopefully a bit of rain will get the water running again for a last burst of birds and butterflies before winter arrives.

Of the few birds I saw that day, this Curve-billed Thrasher was hiding out in a juniper holding this bright red thing in its beak I couldn’t quite make out.

Eventually, I figured out it was a prickly pear fruit or ‘tuna’, that it must’ve peeled to get at the sweet fruit and seeds inside.

Another day I checked out Los Poblanos Open Space, where last year about this time there were hundreds of Clouded Sulphurs nectaring on fields of clover and I got some good pictures of hummingbirds on some of the flowers growing by the garden plots.  This year, they seem to have rotated the crops in the field and had mowed a good part of it, but there were still some butterflies around the few remaining patches of clover.  Not many birds there just now, either, but I did see this roadrunner hanging around the vegetable plots, 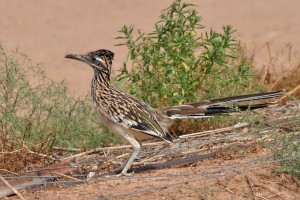 and saw this immature American Kestrel fly in and perch high in a cottonwood.

With everything so dry around here lately, on Tuesday I decided to make the drive up to Las Huertas Canyon on the north end of the Sandias where earlier in the year we’d had good luck with butterflies and there was a good flow of water down the creek.  Turns out Las Huertas Creek has water flowing year-round and there were quite a few late season flowers blooming as the trees begin to take on their fall color.  That was good news for butterflies and at a place we’d seen some good ones before there were several species hanging around including the first Mourning Cloak I’ve seen in some time, Pearl Crescents, Cabbage Whites, Common Checkered-Skipper, another Hoary Comma showing off, and a couple of Arizona Sisters.

The next day, following a tip we found on the Butterflies of America website, Rebecca and I again went in search of the elusive Apache Skipper.  Astonishingly, following the directions to head 9.2 miles from the intersection of Hwy 4 and 485 through the Gilman Tunnels in the Jemez Mountains, we parked at a chamisa that was in bloom and immediately got our first (and only) Apache Skipper!

Distinctly different from the more usual Green (H. viridis) and Pahaska (H. pahaska) we see around here, this one has a little white on the antennae and separated white spots on the forewing.  It’s not often Rebecca gets a new ‘life’ butterfly, so to get one this easily was quite a treat.  A return visit is definitely warranted in the future as this is a quite scenic area and uniquely different than most other places in New Mexico; surprising, actually, that this was only the second time I’d ever been there.