One of the advantages of retirement is no longer being tied to regular schedules and easily being able to change plans for the day’s activities.  Actually, with every day feeling like a weekend, life is good.  Kicked off this week with a trip to Embudito Canyon, my local patch that I hadn’t been to in a few weeks.  It was good to see all the regular birds about but the wildflower riot of spring has ended and even with some recent monsoon rains, little water was present and very few butterflies.  A number of Cactus Wrens were about, however, actively calling and apparently still nesting.

The next morning, it was off to Tingley Ponds, another favorite location I hadn’t been to recently.  It seemed to me for some reason not many Blue Grosbeaks were being seen this year, but that’s probably because I hadn’t been to the right habitat.  Sure enough, there were plenty of them down by the river including this one.

Better yet, the resident Green Heron who has been present during past summers at the southern pond is again there this summer.

And, of course, the place was swarming with a variety of dragonflies and damselflies.  Tingley Ponds is where I first got into those odonates on the Fourth of July two years ago, amazing myself first that it was possible to take their pictures and then that there was such a variety and it was reasonably possible to identify them.  Here are pictures of a Widow Skimmer and a Roseate Skimmer from that morning. 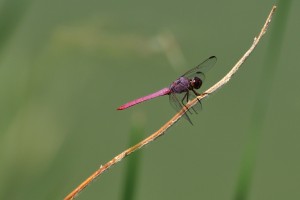 On Wednesday this week, Rebecca and I repeated our trip of last week to butterfly spots in the Sandias in hopes of seeing a unique species we’d seen once last year and are hopeful of finding again.  No luck this time, but we again saw a surprisingly large number of Tailed Copper butterflies

and an amazing number of Northwestern Fritillaries.

There were also plenty of tachinid flies on the coneflowers, too.  This week they all seemed to be of this red variety, while last week it was mostly yellow ones we were seeing.  Don’t know what it is about these guys, but the pictures of them always seem to come out really well.

The Thursday Birder group this week headed off to Bluewater and Acomita Lakes a couple of hours west of Albuquerque.  A canyon at Bluewater having a stream cutting through it was incredibly green and full of tall grass and wildflowers.  Few butterflies about, but large numbers of Cliff Swallows occupied nests built along the cliff walls. 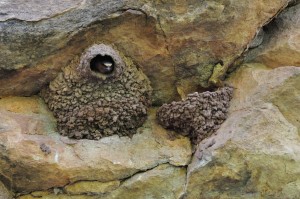 When we arrived at Acomita Lake late in the afternoon, for such a small body of water there was a surprising number and variety of birds including almost a dozen Great Blue Herons, Ruddy Ducks, Yellow-headed Blackbirds, and American Avocets.  Hundreds of bluet damselflies and several dragonflies were also present. 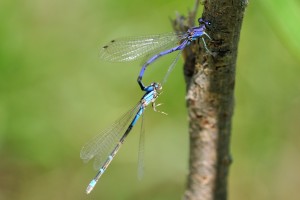 The next day, we’d planned to check out the Pecos Wilderness for butterflies before heading to a friend’s cabin near Las Vegas, but skipped the wilderness part after hearing late Wednesday about a butterfly count in the area.  Friday morning, we therefore joined up with a fun group of people for the Fourth Annual NABA Butterfly Count organized by the Hermit’s Peak Watershed Alliance.   The group met at a skating pond in Montezuma, NM, where we were greeted at the start by the call of a pair of nesting Peregrine Falcons.  One of them was roosting at the top of the cliff for a few minutes, and then flew off before returning some minutes later.

With one of the local people riding with us, we were assigned several areas to explore for the count, including one fabulous spring on private land and would see close to 30 species that morning.  A new one for the year for us was the Melissa Blue, one of five species of Blues we’d see that day.

Surprisingly given our recent sightings in the Sandias, we’d see no Coppers and only one Northwestern Fritillary (although we’d see plenty the next day at our friend’s nearby cabin).  Taxiles Skippers, as usual, were quite plentiful and actively sought out the blooming thistles.

Several different kinds of grasshoppers were about as well, including this one checking out a faded thistle. 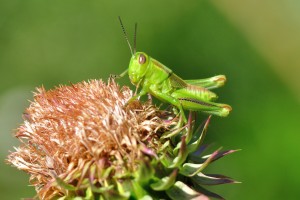 We had a wonderful time visiting our friend Rebecca (yep, Rebecca #2) and her cabin way back in the mountains near Hermit Peak in an area surrounded by flowing streams, several ponds, and meadows filled with wildflowers.  A couple of hikes around the area would turn up several butterfly species we hadn’t seen during the official count, but that were within the count radius.  Joining us on these walks was Pekoe, a great beagle who seemed to enjoy doing her thing checking out all the interesting scents along the way.

We were a little confused at first trying to identify this female Clouded Sulphur because of its almost turquoise coloring.  The males and most females are usually a pale yellow, but some females are more of a greenish white color.

And after several unsuccessful attempts, I also finally got a reasonably good shot of one of the Metallic Green Bees I’ve been seeing lately on a coneflower. 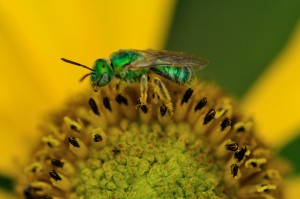 A great weekend ramble and certainly an area worth a repeat visit soon, but now it’s time to get ready for an adventurous couple of weeks that will hopefully generate some good pictures.