The dry heat of early summer is upon us with hopes high for the start of our ‘monsoon’ season any day now.  Good excuse for a few forays into the cooler high country of the mountains, and a busy time for birds, butterflies, and other critters.

To kick it off, the Audubon Thursday Birder group headed out on June 14 for a pleasant morning high in the Jemez, where we’d see quite a few nesting holes for birds drilled into large aspen trees.  While pictures of some of the nesting birds didn’t come out all that good, this one of a Red-tailed Hawk giving a ride to a snake worked fairly well.

Action in the world of odonates was also quite busy, with this Widow Skimmer taking a short break before returning to the fray. 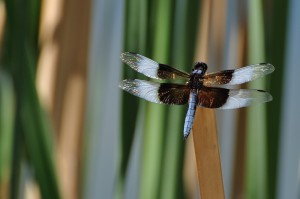 On Saturday, Rebecca and I headed up into the mountains above Santa Fe to look for a few butterflies, and after a bit of a slow start in the cooler cloudy morning would soon spot a couple of Common Alpines working the meadow where we’d seen them about this time last year.

The meadow would also provide both the Hoary Comma and Green Comma, Painted Lady and West Coast Lady, and several Western Tiger Swallowtails among other species. 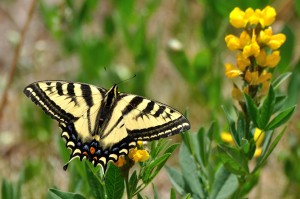 On Monday, Matt, Rebecca, and I went to a few of our favorite spots in the Sandia Mountains, where we’d get several new butterflies in addition to some old favorites.  Matt was particularly good at not only spotting those tiny critters, but in recognizing quickly if it was something unusual.  A new one for me in New Mexico was the Southern Dogface,

which he spotted in Ojito de San Antonio, and later a Behr’s Hairstreak up at the 8000′ marker.

A Taxiles Skipper, which we’d start seeing frequently over the next days, also posed nicely for a picture. 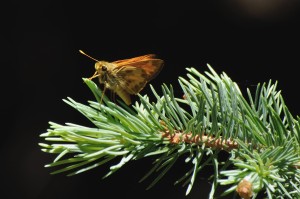 Up near the Sandia Crest, we walked the trail to Kiwanis Meadow and got to observe a pair of Northwestern Fritillaries for several minutes apparently performing some kind of mating ritual.

The next morning, Matt and I headed up to Las Huertas Canyon north of Albuquerque, a new spot for him that had been pretty productive for me back at the end of May.  Matt and I got some great butterflies that morning, including the Tailed Copper and Colorado Hairstreak, and Rebecca and I went back there yesterday and again spotted both of those species.

The Copper is not only interesting from the side, but flashes golden when it opens its wings.

On June 21, the Thursday Birders drove south to the Los Lunas River Park, ending the morning with a visit to an active rookery for Snowy Egrets, Cattle Egrets, and Black-crowned Night Herons in Bosque Farms.  My best pictures of the morning were this nearly mature Snowy Egret and a pair of immature Snowy Egret nestlings being fed by an adult. 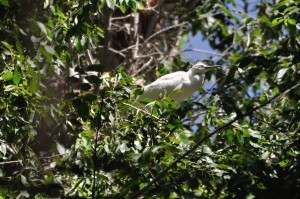 Early the next morning, Rebecca and I headed up to Raton for the annual ‘Bodacious Butterfly Festival’ at Sugarite Canyon State Park and a quick visit to Capulin National Monument.  The festival must not be very well publicized because so few people attended, but it was a good time with several walks led by Steve Cary, our state expert and author of the excellent ‘Butterfly Landscapes of New Mexico‘.  On Friday, we checked out a few areas on our own before the festival kicked off that evening.   A first for the year for me was a Satyr Comma, to go along with the Hoary Comma seen regularly around here and the Green Comma we saw in Santa Fe earlier this year.

These guys are called ‘commas’ for that small white mark on the hind wing.  There were also quite a few varieties of damselflies and dragonflies near the water, such as this triplet of bluet damselflies,

and a few cool-looking bugs, including this guy whose name we haven’t quite figured out yet. 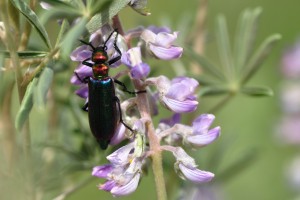 A morning walk on Saturday had quite a few kids along who were given butterfly nets to run around trying to capture a few of the different varieties we’d see.  The afternoon walk was a bit more of a hike with mostly older aficionados and added a number of species to our list.  Overall, we’d end the weekend having seen a good variety of butterflies including several new species for me, and getting a few good pictures such as this one of a Northwestern Fritillary.

Plenty of birds were present at Sugarite as well including a large number of Black-headed Grosbeaks, some Western Bluebirds and Bullock’s Orioles.  At the picnic area by the Visitor Center, we got to enjoy watching a pair of Northern Flickers using a tree cavity for their nest, 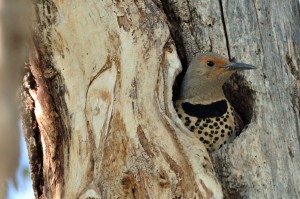 and got great looks at a Yellow Warbler. 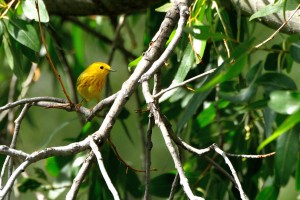 Arriving at Capulin National Monument on Sunday a few minutes before they opened, we were surprised to see right on the lawn a Canyonland Satyr, my first for the year.

A male Broad-tailed Hummingbird perched in a nearby tree, regularly flashing its brilliant red gorget. 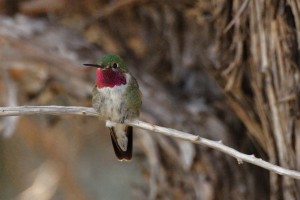 As we were about to wrap up our visit and head for home, I noticed this bizarre looking insect, which would turn out to be an Asilidae Robber Fly, known for their bright green eyes.