I’ve been writing about owls a lot lately, and this time is no exception.  Other than sometimes seeing more than a single Burrowing Owl or that unusual day at Rio Rancho’s Willow Creek Open Space recently when there was a pair of Great Horned Owls roosting in a tree, usually I’ve only spotted the female sitting alone on her nest.  And up until last week, that included nests at the Rio Grande Nature Center, Tingley Beach, and Albuquerque Academy.  Well, things got hopping this week with another nest, baby owlets in at least three nests, and spotting the males lurking near three of the nests!

The fun began on last week’s Thursday Birder outing to the bosque near La Orilla Rd.  and then Pueblo Montano Open Space.  At Pueblo Montano we easily spotted the abandoned Cooper’s Hawk nest that the Great Horned Owls were using.

What made the day truly remarkable was seeing the male fly from his hidden location to another perch where he was mercilessly harrassed by a Cooper’s Hawk.  After taking the heat for a couple minutes, he flew off to another spot where he merged pretty well into the shadows.

He must’ve felt too obvious, however, with all those people staring at him and eventually flew off and disappeared into the forest, but not before letting me get this pretty good picture of him heading off. 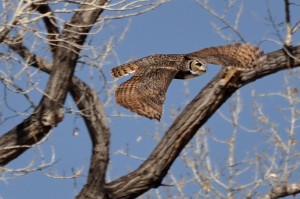 (Note: It does pay to anticipate what they’re going to do and have your camera ready, but getting a picture like that is more luck than anything else.)

Realizing that it’d been almost two weeks since I’d checked in on the other nesting pairs,  Rebecca and I went on a nest tour Saturday (and I checked in with everybody again today) to see how things were progressing.  Starting at the Rio Grande Nature Center, we confirmed the rumors that eggs had hatched,  seeing what looked like furry white tennis balls tucked in the nest — by Wednesday they’d grown big enough for a picture.

Poking around the woods while trying to get that picture today, who should I spot but the nearby male, who was doing his best to ‘Be the Tree’, going so far as to tuck his head against a branch to hopefully merge into the background.

I’d spot him a little later doing a slightly different variation on the theme of looking as much like a branch as one can. 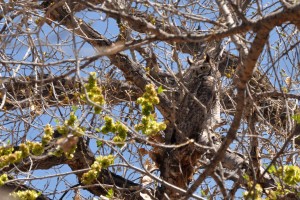 The nursery was in business at the nest at Tingley Beach today, too, with a little one staring back at me.

Looked pretty hard, but didn’t spot the male for this nest anywhere in the vicinity.  After another look at the Pueblo Montano OS nest, where the male was also hiding pretty well today, the tour wrapped up with a visit to the nest at Albuquerque Academy.

On Saturday, Rebecca and I had seen the fuzzy white tennis ball of a newly-hatched owl, and today I got a little better picture of the two little ones, one of whom seems to be yawning at all the excitement (Mom turned around for this picture apparently teaching the lesson of how to ‘Be the Tree’.).

Spotting that male at Pueblo Montano last Thursday had been a first for me, and seeing the male at the Rio Grande Nature Center today was a treat, but last Saturday, sure enough Rebecca spotted our guy at the Academy nest site hiding out about 50 yards away.

Pretty obvious from this perspective if you’re looking for him, he was absolutely invisible from the walkway close to that tree.  We snuck up close enough to get this picture before quietly leaving him to his business.

There were a few other birds about this week, too, including my first Osprey for the season today doing a fly-over at Tingley Beach, where also I saw a Neotropic Cormorant swallow a good-sized fish, and a few others.  Spring migration hasn’t yet picked up here yet, but should start happening any day now.

And there’s been a few good butterflies this week (at least before the cold returned Monday and  the snow hit Tuesday).  Friday, Rebecca and I took a look around Embudito Canyon before seeing if anything was flying yet at Hondo Canyon.  Got another pretty good shot of the New Mexico State Butterfly, the Sandia Hairstreak (Callophyrs mcfarlandi),

In Hondo, we thought we had something special with this next butterfly, which turned out to be a Common Checkered-Skipper (Pyrgus communis), a butterfly we’d never before seen perched with its wings folded, but easily identified when it finally took the normal pose with wings spread.

After checking out the owl nests on Saturday, we ran into Matt in Embudito for some butterflies and I’d return the next day hoping for some more pictures.   Two good ones that weekend were the Rocky Mountain Duskywing (Erynnis telemachus) 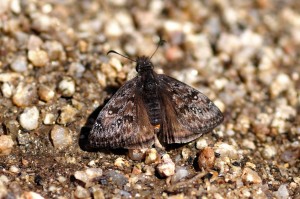 and (lifer for me) a Short-tailed Skipper (Zestusa dorus). 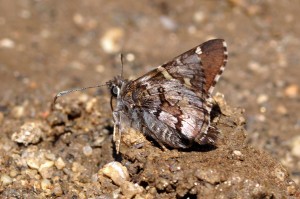 Off to Pena Blanca and Cochiti Lake tomorrow with the Thursday Birders, which can produce some good birds.  Spring migration is due to kick off any day now; and whoa, the butterflies have started flying again!